For the second time in as many weeks, Bengals quarterback Andy Dalton established a career-high passer rating, posting a 132.9 against the Washington Redskins on Sunday. That was following a previous mark of 128.8 against the Cleveland Browns last week. A collection of weapons and play calls has enabled Dalton to thrive early in the season. But none of that matters if the Bengals pass protection isn't keeping him upright. And for the most part, they did their job against the Redskins last week.

But we start not with Andy Dalton, rather Cincinnati Bengals wide receiver Mohamed Sanu taking the first snap from scrimmage on Sunday. From a wildcat/shotgun formation, Sanu unleashed an arching 73-yard touchdown pass to A.J. Green, giving the Bengals an early 7-0 lead. It was... beautiful. And impressive. But one can't be impressive without the success from their offensive line -- and if you watched the first half of Monday's game between the Seahawks and Packers, you'd agree. After Sanu took the shotgun snap, Washington defensive end Ryan Kerrigan sprinted upfield. Offensive tackle Andre Smith tracked him like a Lion hunting a dangerous adult male buffalo. Washington's best pass rusher tried overpowering Andre Smith, but the former first-round pick out of Alabama held his ground. 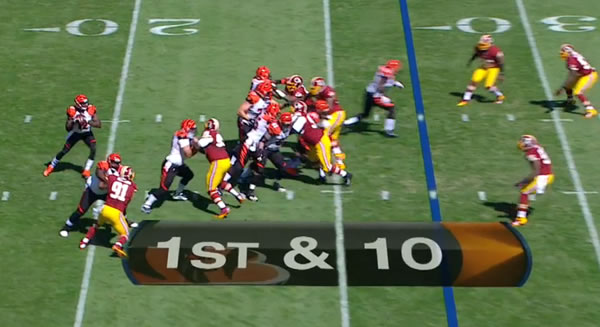 Perhaps it was the visual impression of having a wide receiver at quarterback, preventing Kerrigan's pass rushing instincts to fully collapse the pocket using an armory of moves. It's possible. For all that he (and the rest of us) knew, they were going to run the football off the edge, often the result of a wildcat formation. Instead Sanu threw the football deep down the middle of the field without any pressure.

It was a similar theme for Smith all afternoon. A pick-six (which we detailed here) later, Jermaine Gresham subsequently committed a false start penalizing the Bengals into first and 15. Following an uneventful two-yard run, the Bengals established second and 12 from their own 16-yard line. Washington rushes five and Andre Smith does a Gandolf impression ("You shall not pass" reference) on Ryan Kerrigan. 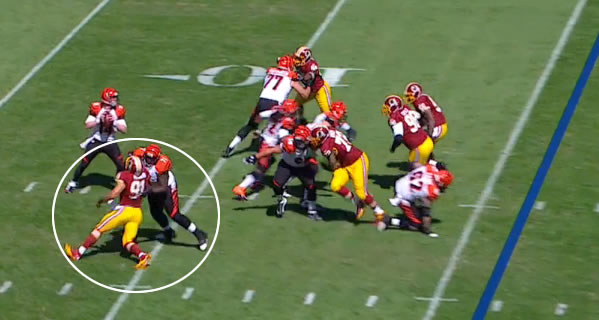 Actually everyone held their own, except for Jeff Faine who lost his balance when leaning forward against defensive lineman Stephen Bowen. No harm. Kevin Zeitler picked up the block. Dalton completed the 22-yard pass to Jermaine Gresham, generating a first down.

Others got into the pass protection act. Clint Boling, Jeff Faine and Kevin Zeitler didn't allow a hit on the quarterback or pressure. And following Josh Wilson's pass interference that pushed Cincinnati to their own 48-yard line with over nine minutes remaining, Andy Dalton takes the first down drop and BenJarvus Green-Ellis stays to protect. DeJon Gomes blitzed and was PUNISHED by Green-Ellis.

For good measure, and nothing better to do, Green-Ellis swan-dove (or is it swan-dived) on top of Gomes for the three count. While refusing to remark Jermaine Gresham's creative pass protection move on Ryan Kerrigan... 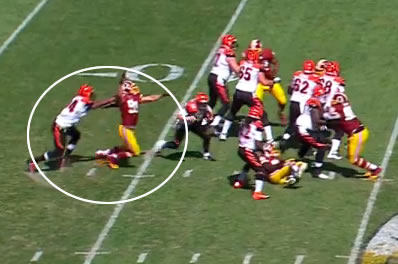 ...Dalton was able to escape pressure on a rollout to the right, completing the 14-yard pass to A.J. Green. First down.

The Washington Redskins tied the game at 24 with over three minutes remaining in the second when Cincinnati's offense finally takes the field from their own 20-yard line. The play was a simple back-shoulder throw to A.J. Green down the right sidelines, but required some protection due to the five-step drop. The Bengals kept seven for protection with three receivers heading out. BenJarvus Green-Ellis stoned a blitzing DeJon Gomes and Jermaine Gresham did an excellent job slowing Ryan Kerrigan just enough for Dalton to release the football 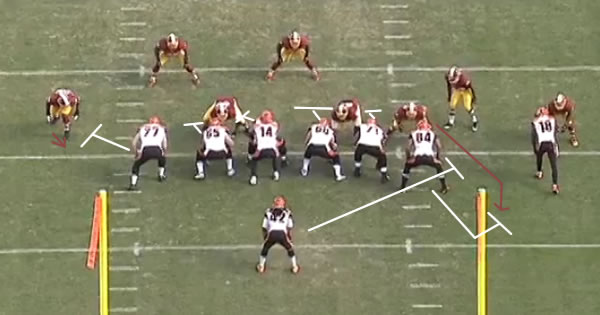 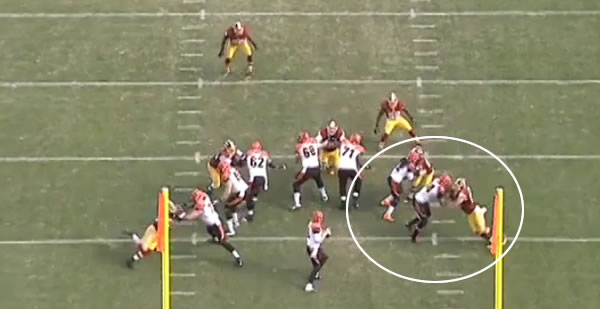 Yet sometimes the quality of a pass rush only succeeded based on Andy Dalton's fearlessness to withstand a hit on the pocket. Seeing A.J. Green's vertical route develop down the right sidelines with DeAngelo Hall covering, linebacker Markus White's pass rush against Andrew Whitworth would have severely crippled an offensive possession that would eventually result in a touchdown.

Dalton released the football prior to White's attempted strip (he was going for the ball, not the hit), connecting with A.J. Green on the 31-yard reception. It was one of Whitworth's poorer efforts, when speed and agility trumps his somewhat statuesque frame.

However it wasn't all peaches and cream either. There were struggles. We detailed one of those here. 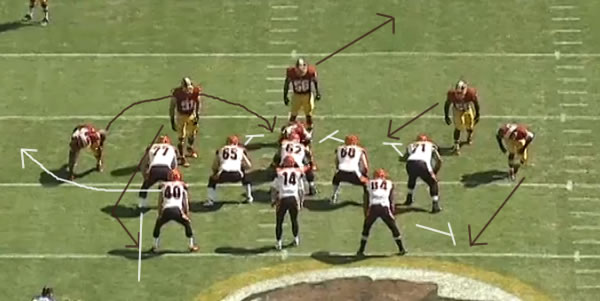 Now the play actually offered pocket stability roughly four seconds after the snap, until Kerrigan's swinging arm penetrated Dalton's space and peripheral vision. By that time the quarterback was looking to ditch the play with a scramble but was subsequently sacked by Kerrigan and Wilson. Whitworth was also called for offensive holding, which the Redskins declined.

The Bengals entered the redzone early in the second quarter but couldn't penetrate the dreaded five-yard line. With 10:33 remaining in the first half on second and goal from Washington's five-yard line, Andy Dalton takes the snap as outside linebacker Perry Riley hovers around in coverage momentarily. As the blocking assignments settle, with Jermaine Gresham blocking Markus White, Clint Boling locked into Stephen Bowen and Andrew Whitworth patrolling his zone, Riley blitzes without contest. 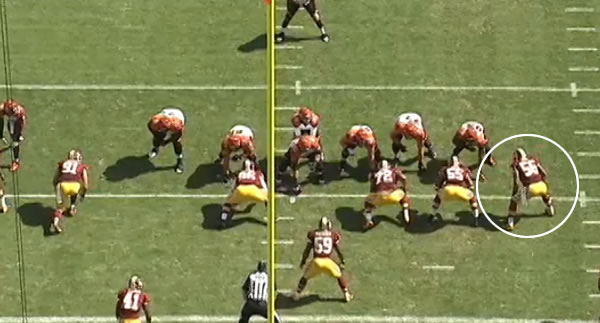 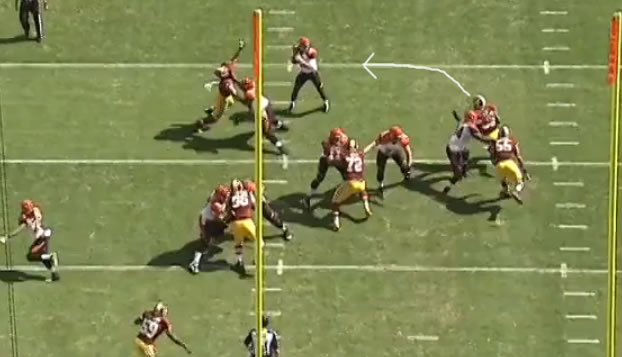 Andy Dalton is sacked and the Bengals failed to recover for a first down. Now we should point out for those that check the grades, Pro Football Focus credited the sack to Jermaine Gresham. But we have a problem with that, considering he was already established on a blitzing linebacker. If he releases White for Perry, White has the free shot on Dalton. If anything Andrew Whitworth could have monitored the scheme to his left, picked up leftovers and given Dalton more time during his progressions. Regardless of how it should have worked out, perhaps it's somewhat aggressive to assign a quarterback sack on Gresham.