The Cincinnati Bengals will play their first of two games with a 4PM(ish) kickoff time this season, heading to Jacksonville for an epic battle against the Jaguars.

Share All sharing options for: Television Coverage Map For NFL Week Four Game Between The Bengals And Jaguars

The Cincinnati Bengals head down to Jacksonville, playing the Jaguars in a game with a 4:05 PM kickoff time. Remember that. It's 4:05 PM (ET). An unusual for a non-national game of the week between two East Coast teams. Sure our friends in California are stoked about that one. Not having to wake up and prep for a 10:05 AM start. But then they lower their heads in disappointment realizing that the game won't be on television -- unless they have the NFL Ticket, but then those people are just happy about everything. In fact not many people will see the game between the Bengals and Jaguars. As you can presume, the game will be mostly in Ohio, save for Cleveland, Kentucky and West Virginia. Parts of Florida, Alabama and Georgia will also have the game.

If you're in Cincinnati, this will be the lone CBS game for the lot us. The early Fox game this week features the New York Jets hosting the San Francisco 49ers and the New Orleans Saints at the Green Bay Packers for the late game. But you won't watch that game, will you? Because what time does the Bengals kickoff? That's right. On a personal note, as a Time Warner subscriber finally bringing the NFL Network into my home, it'll be a little neat to try out the RedZone channel.

Now the map for the Cincinnati Bengals this weekend. 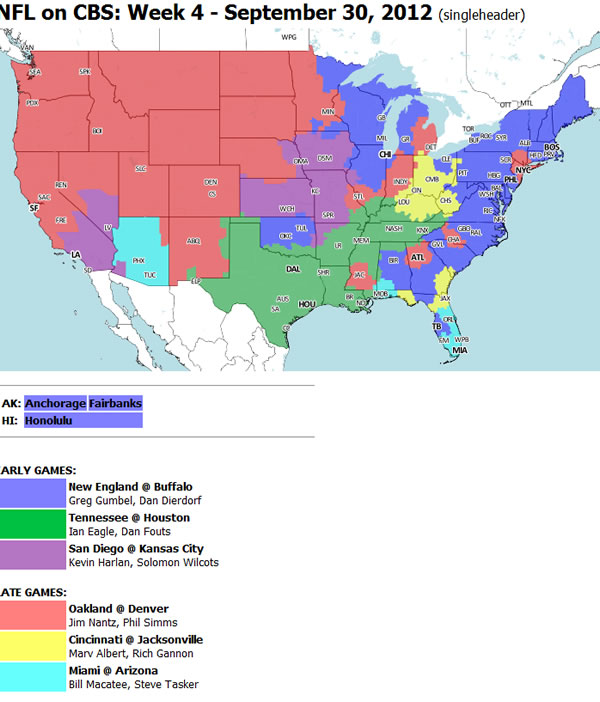