Cincinnati Bengals quarterback is clearly showing growth as a quarterback in the NFL, quickly recognizing coverage schemes with a weapon of wide receivers.

Lost in the trivial debate about Andy Dalton's arm strength over the offseason, generating questionable comments from respected analysts, is the solid intangibles that Cincinnati's franchise quarterback keeps developing. Noted for leadership, his pose has gained attention dating back to last season. Yet in three games this year, Dalton has generated a league-high 158.3 passer rating in the fourth quarter, the same quarter when half (3) of his total touchdowns (6) are scored. And during the fourth quarter when the game is within seven points either way, Dalton has completed 14 of 15 passes for 249 yards passing with three touchdowns.

It's the mental superiority that's establishing a path of confidence surrounded by an armada of weapons that's allowed Dalton to score four of his six touchdowns from 40 yards or more. Yet this is the core of Andy Dalton.

And that's the thing. It's his decision-making that's taken a significant jump since being drafted in the second round of the 2011 NFL draft.

Late in the third quarter with 3:29 remaining, the Washington Redskins show Man Cover One before the snap. Cincinnati lined up using their favored single-back formation with Andrew Hawkins in the slot. Andy Dalton already has the matchup he wants during his presnap reads. A.J. Green against DeAngelo Hall with the Redskins playing Cover One and Madieu Williams playing centerfield? 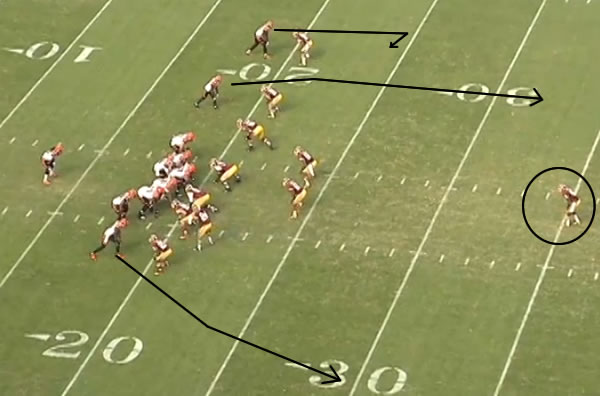 Surprisingly the Redskins offer Hall no help against a receiver that will beat most defensive players in the NFL. The pass was underthrown but appears designed as a back shoulder throw. Green's athleticism makes the 27-yard reception possible anyway, shielding Hall while securing the back-shoulder throw. It was well after the catch that another Redskins defender entered the television frame.

Even before the snap Dalton read the defense and took advantage of Green's superior advantage over Hall. 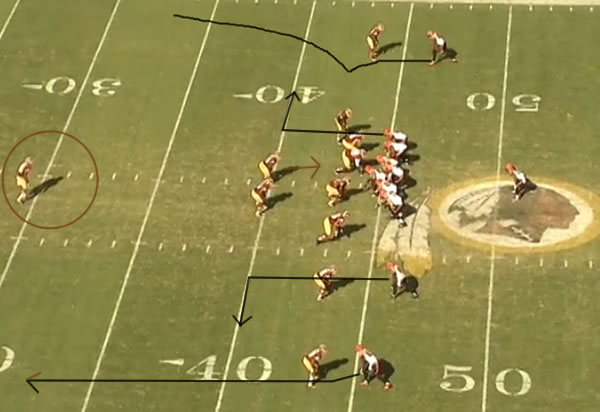 And much like the play before, once Dalton recognized man coverage, the quarterback's internal instinct to rely completely on A.J. Green kicked in. He threw the perfect pass down the right sidelines to A.J. Green, whose double-move generated good separation for the 31-yard completion, hitting the receiver in stride.

Yet the more impressive intangibles of Dalton's game is his intelligence and recognition. Eventually the Redskins adapted, learning that you can't leave A.J. Green single-covered on anyone. He'll burn them. With 7:17 remaining in the game, the Redskins countered with a Cover Two, keeping the cornerback inside with a safety over top on Green and Binns. From their perspective it was the perfect call because both receivers ran a vertical route down their respective sidelines. 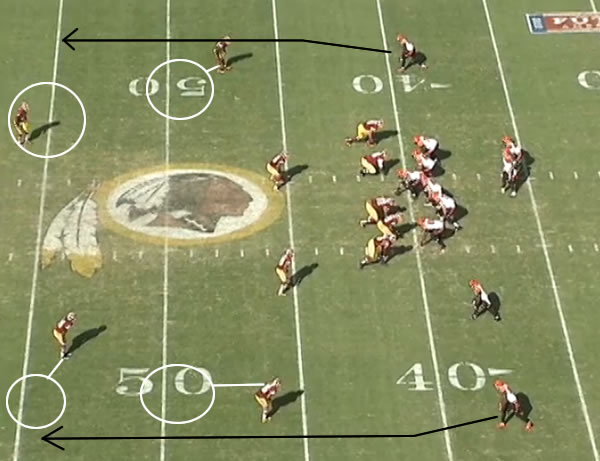 Now the result of having safeties playing cover two, opens a known weakness over the middle, which forces the nickel in man or the inside linebacker in zone to cover. These can develop matchup problems, especially with speed in the slot. Jermaine Gresham occupied a linebacker underneath while Richard Crawford played nickel, well off the line scrimmage with his assignment being the speedy Andrew Hawkins. 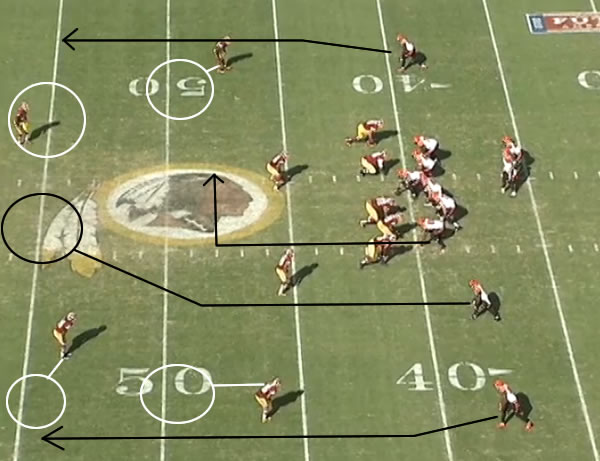 Dalton immediately recognized the coverage. London Fletcher completely mauled Jermaine Gresham, making that option impossible. And it wasn't going to be one anyway. Hawkins, clearly with a speed advantage over Crawford, was the route designed to expose the weakness of a cover two scheme. Crawford allowed Hawkins a free release; a decision that doomed him.

Already with a two-yard advantage over Crawford, Dalton eases a floater over the defender hitting Hawkins.

Hawkins scored turned turf into dust, leaving Washington's secondary behind him for the 59-yard touchdown that gave the Cincinnati Bengals their game-winning touchdown and a 38-24 lead midway in the fourth.