Cincinnati Bengals cornerback Adam Jones denied the horse collar tackle against the Redskins. He might be right.

Bengals cornerback Adam Jones told reporters that he had a serious problem regarding his $15,000 fine from the NFL earlier this week. Not because he had to pay a fine. Rather because he didn't commit a horse collar tackle in the first place.

"They say horse collar, but it wasn’t a horse collar," Jones said. "If you rewind the film and look at the film like you should look at it, it was clear that I had his jersey."

That's what they all say, right? I'm innocent! Well. He might be right. So took we took a look at the film.

It's the third quarter with 11:58 on the clock, second and one from the Bengals 40-yard line. Redskins running back Alfred Morris takes a handoff up the middle and gains five yards, with Adam Jones making the stop. When Jones makes the initial contact, his hand is placed near the collar. One can assume that alone may prompt the official to watch closely. 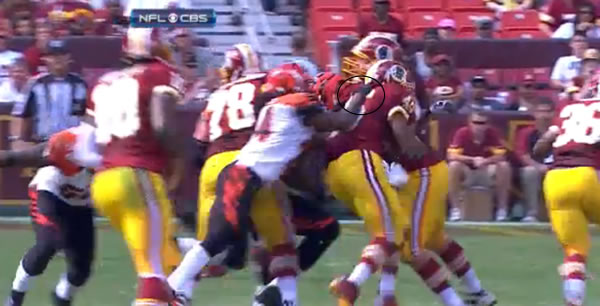 As Jones twists around to drop Morris, you can clearly see that Jones with a fist-full of jersey. 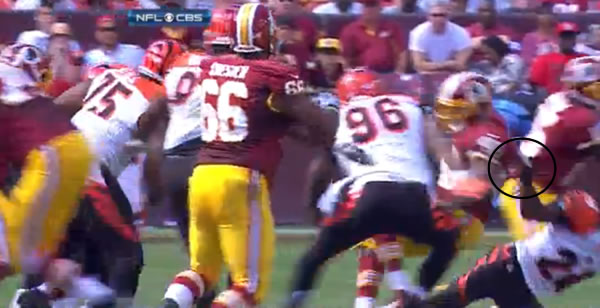 What's interesting isn't so much that he was flagged for a horse collar. Look. Just like the replacements, regular officials will get calls wrong from time to time. And since football fans have never ever done something wrong at their respective places of employment, we'll just have to assume that mistakes tend to happen.

What's odd is that the league, supposedly reviewing these calls during the week to assess actual penalties, still elected to fine Jones. Based on this, apparently they don't, hand-picking penalties on a chart like the Game Books and assessing the fine. Unless you hit someone really hard. Then they'll suspend your disobedient nature.