The Cincinnati Bengals have several trends to extend, including a career-run for Dalton as well as the first consecutive wins in franchise history at Jacksonville. We preview that as well as other items heading into Sunday's game.

Andy Dalton is on fire (and we're not referring to the lame references about the color of his hair). For the first time during his promising young career, Dalton generated consecutive 300 yard passing performances against the Browns and Redskins. Dalton also surpassed a 10-yard average (twice), including a career-high 12.15 yards against Washington last week, recorded two of his highest passer rating scores in his career and thrown six touchdowns in a two-game span. Then there's perfection with a 158.3 rating in the fourth quarter this year. At this pace Dalton will surpass 4,624 yards passing and 30 touchdowns.

Last week against the Indianapolis Colts, Jacksonville forced nine Andrew Luck incompletions in the fourth quarter, completing only five of 14 passes. Though Luck took chunks with completions of 17, 32, 39 and 36 yards. 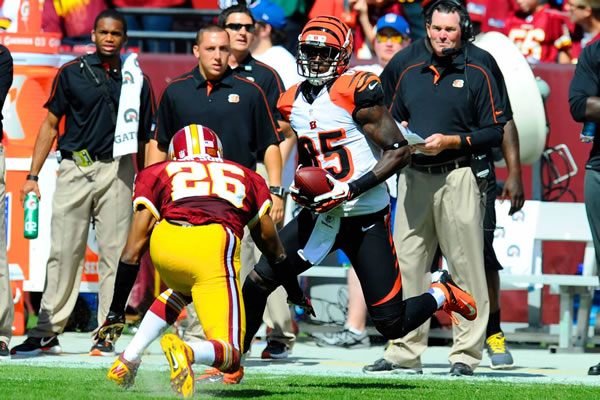 However unlike the Colts, Andy Dalton has an armada of weapons that's already cashed in with an evolving quarterback capitalizing on distribution. After A.J. Green's team-leading 21 receptions (20 from Dalton), Andrew Hawkins, Armon Binns and Jermaine Gresham are all tied with 12 grabs. Five Bengals have at least one receiving touchdown through the previous two games (no touchdowns against the Ravens) and every receiver and tight end with one recorded reception is averaging over 10 yards. Yet it's not all Dalton. Much of the quarterback's yardage is coming from receivers after they've caught the football.

KEEPING AN EYE OUT FOR MINCEY 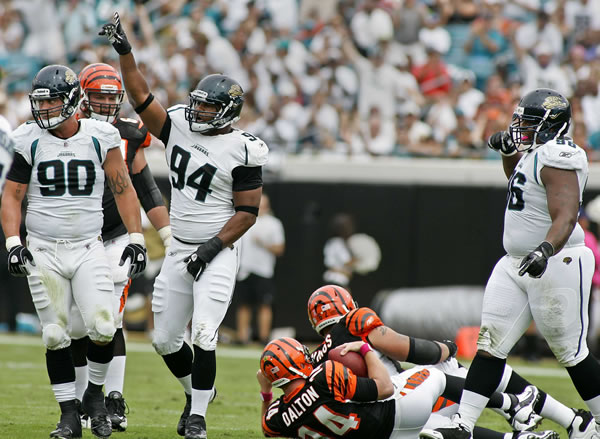 Last year when these teams met in Jacksonville, defensive end Jeremy Mincey, who the Bengals were interested in during free agency, turned in a decent performance against Andrew Whitworth and Nate Livings. Along with a quarterback sack, Mincey put Dalton on the ground four times after the quarterback released the football and totaled five tackles for the game.

That being said Andre Branch, the other pass rushing defensive end for the Jaguars this season, and Mincey have combined for zero quarterback sacks, one hit on the quarterback and 12 pressures, which amounts to one pressure every nine drops backs.

The lack of production not only puts pressure on Jacksonville's defensive schemes against the pass, it forces Tyson Alualu and Terrance Knighton to add inside pressure. They've helped with each generating a quarterback sack, plus five hits and two hurries. But then we're not talking about the Jaguars version of Geno Atkins either. Poor pressure from the front four by the Jaguars will force the defense to blitz Dalton, who will subsequently have a field day with receivers in single-coverage.

OH WHERE, OH WHERE COULD MY RUNNING GAME BE 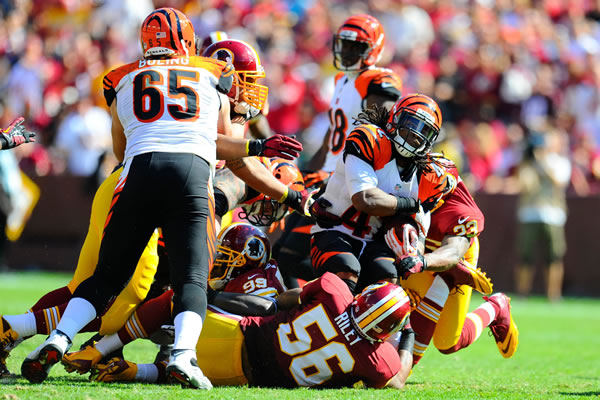 After posting 91 yards rushing on 18 carries (5.1 avg) against the Baltimore Ravens, BenJarvus Green-Ellis has combined for 113 yards rushing on 38 carries since (3.0), including his first professional fumble against the Washington Redskins. It's those types of performances that noticeably delinced support for former running back Cedric Benson. Of course Green-Ellis can only established so much with this offensive line.

According to Football Outsiders, the Bengals have one of the poorer offensive lines when running behind Andrew Whitworth or outside his left shoulder. Yet their tendency to learn sometimes takes moments of ingenious flashes because 33 percent of their runs this season have targeted outside Whitworth, where they've been the least productive in the running game.

Bernard Scott, who returned last week after a six-game hiatus (preseason and regular season) with a broken hand, generated negative five yards on three carries, including an eight-yard loss thanks to a failed crack-back block from Mohamed Sanu.

Ironically the Jaguars, much like the Cincinnati Bengals, are one of the worst rushing defenses at this point, allowing 154.3 yards rushing per game.

Should we expect a great performance from BenJarvus Green-Ellis and hopefully Bernard Scott (if he plays)? The signs are starting to point in that direction (as long as it's to the right), especially with the attention that Cincinnati's offense is generating with big-play touchdowns from A.J. Green, Andrew Hawkins and even Armon Binns.

Yet last week wasn't so much about the Jaguars defense, as it was a clutch 80-yard Blaine Gabbert touchdown and 177 yards by Maurice Jones Drew. As we alluded to earlier this afternoon, the Cincinnati Bengals rushing defense will have their hands full against Jacksonville's ground game. Yet against the Bengals last year Blaine Gabbert completed a 74-yard touchdown with 8:37 remaining in the game, giving the Jaguars a 20-16 lead midway through the fourth quarter.

On Cincinnati's ensuing possession, Jerome Simpson picked up 17 yards but the drive stalled at their own 40-yard line. Punter Kevin Huber subquently dropped a 58-yard rock on Jacksonville's two-yard line. Following Jacksonville's fifth three-and-out possession of the game, Matt Turk, like a golfer trying to rip a drive, shanked a 22-yard punt out of bounds at the 28-yard line with a five-yard penalty tacked on. On third and six from the Jaguars 19-yard line, Dalton threw an incomplete pass and Dennis Roland was called for illegal formation. The Jaguars declined the penalty, forcing Cincinnati into a fourth and six. Dalton converted with a nine-yard pass to Jermaine Gresham, eventually scoring the winning touchdown with a two-yard run up the gut.

But that fourth down throw. Poise, kid. Poise. 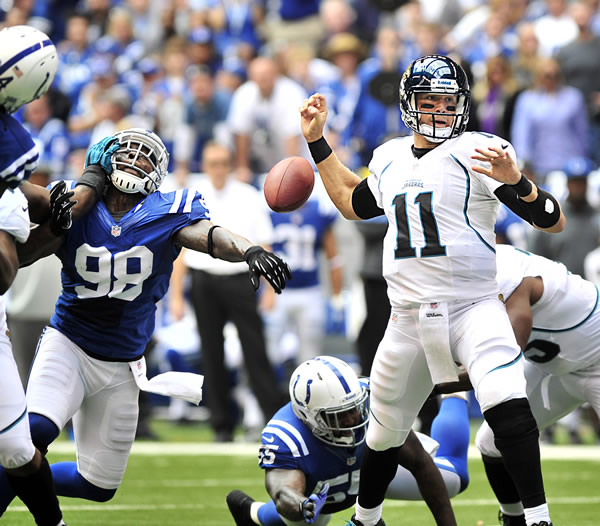 Compounding the defensive issues this year is Cincinnati's inability to force turnovers against the opposing offense. Through three games the Bengals defense has forced two fumbles and generated a "-3" turnover ratio. Without turnovers it presents an opportunity for offenses to sustain drives, wearing down an already thin defense with questions at depth. Though oddly enough Cincinnati haven't been a great turnover ratio team recently. During their previous two postseason runs, Cincinnati had a turnover ratio of zero.