The Bengals And Rey Maualuga: What Happens Next?

Rey Maualuga is in the last season of his contract and the Bengals will have a big decision to make when it comes to his future and the future of the defense.

Share All sharing options for: The Bengals And Rey Maualuga: What Happens Next?

I remember watching the 2009 NFL draft from a bar outside of Cincinnati with a buddy of mine. When Rey Maualuga fell out of the first round and was suddenly available when the Bengals went on the clock in the second round, I started to get really excited. I had watched Maualuga lead a very tough USC defense in college and knew he had the potential to be good in the NFL. The Bengals didn't have much of a choice but to draft him. Not only was he the best player on the board, but Dhani Jones was nearing the end of his career and the Bengals needed to think about the future of the middle linebacker position.

Four years later, Maualuga is about to become an unrestricted free agent. He has started every year, two at SAM and two at MIKE. He has played great at times and at times he has been terrible. If Maualuga's four years in Cincinnati could be summed up in one word, it would likely be inconsistent.

2012 was an interesting year for Maualuga. He had a career high amount of tackles, but he also struggled throughout the season in multiple aspects of the game. Now the Bengals have a big decision to make. They have rookie sensation Vontaze Burfict, who led the team in tackles and could probably slide to the middle linebacker position, which would be his natural position, or they could re-sign Maualuga and bring him back. If they go the second route, what's the right price?

Let's take a deeper look into Maualuga's 2012 season so we can hopefully predict what the Bengals will do.

Of all Bengals defensive players, you may not be surprised to learn that Rey Maualuga had the lowest grade through the regular season, according to Pro Football Focus. He finished the year with an overall grade of -29.8. The next lowest grade belonged to defensive end Robert Geathers, which was a -13.3. That gives you an idea of how bad the folks over at PFF believe Maualuga was.

Maualuga's struggles, especially in the passing game, were painfully obvious in the team's playoff loss to the Houston Texans. Matt Schaub picked on Maualuga's inability to cover running back Arian Foster or tight end Owen Daniels and constantly targeted them constantly. Maualuga dropping back in coverage began to be just an exercise in futility. In his defense, he was asked to cover two of the best at their positions, but a top-ranked defense should have a middle linebacker capable of handling that job.

On the second play of the Texans' first drive, Schaub threw a pass to Owen Daniels for 18 yards and a first down. Daniels ran a quick drag rout, cutting in front of Maualuga. He caught the pass and quickly got up field with little to no opposition from Maualuga.

Here is Daniels about to cut across the field in front of Maualuga:

Now let's take a look at the distance Daniels creates from Maualuga once the pass is caught: 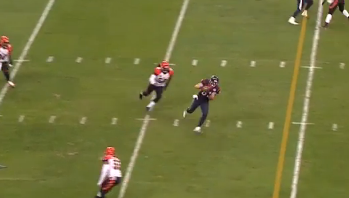 The Bengals had the Texans backed up in the shadow of their own goal post when this drive started. Thanks to Maualuga's inability to cover a decent tight end, the Texans were able to drive down the field. And this happened over and over again on Saturday afternoon and throughout the season.

Let's look at another example. This time Maualuga was covering Foster, and as you can see, he didn't have a chance from the get go as Foster was wide open in the flat.

Schaub connected with Foster and at that time all Maualuga could do was dive for Foster's feet. He missed and Foster was able to tiptoe up the right sidelines for a first down.

Now let's take a look at Maualuga trying to stop the run.

In this next play, Schaub handed the ball to Foster on a delayed hand off. The offensive line had allowed the defensive line to rush up field and opened up a large hole for Foster to get to the second level, where the only person standing in his way was Maualuga. 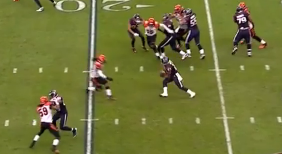 Foster cut to his right, making Maualuga miss badly and was able to get within a yard of a first down. He picked up the first down on the next play.

The Texans, and many other teams, did this over and over all season long to the point that we can safely assume that they target Maualuga as a weak point in the Bengals defense, especially inthe passing game.

So what are the Bengals to do? On one hand, Maualuga was second on the team with a career high 122 tackles in 2012. On the other, tackles may be the most overrated stat on defense because it doesn't show any big plays. Burfict made big plays almost all season long. Maualuga gave up more big plays than he made.

If the Bengals let him go, though, who will play MIKE. The answer to that is likely Burfict, but the Bengals would then either have to re-sign Manny Lawson for SAM and Thomas Howard for WILL, or they would have to bring in new outside linebackers through the draft or free agency.

If they do bring Maualuga back, how many seasons do they sign him for and for how much? Certainly they wouldn't want to spend a lot of money on a player that can be a defensive liability, especially when they're going to have to re-sign Michael Johnson and Andre Smith, and worry about keeping guys like Geno Atkins, Andy Dalton and A.J. Green happy in the very near future as well.

What do you think the Bengals should do?