There will be high-profile names surfacing during free agency. Just don't expect them to sign with the Cincinnati Bengals. But then again, is that a conditioned response from an older Bengals fan?

The very core of our existence as experienced Bengals fans once laughed in the face of offseason progressionism. Maybe next year began with questionable draft picks, silence on the free agent market and multiple-game losing streaks that diminished hope already on life support. Before the leaves wrapped themselves with autumn-shaded winter coats, most of us scouted next year's stock of draft picks. We were a beaten bunch base that viewed the Bengals front office not unlike... 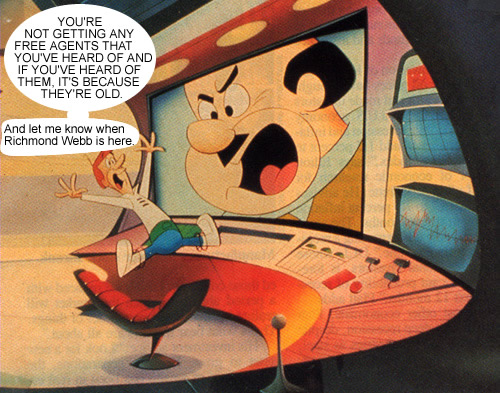 In a way it still exists.

My original opening line to this posting began with "STOP IT, LEAVE ME ALONE, GO AWAY WITH YOUR UNPURE THOUGHTS!", eventually transforming into a classical anti-hyme: "Tis the season to be speculative. Fa-la-la-la-la, just stop it." Stop asking about every high-profile free agent that 1) you find on a list of free agents and 2) was recently releases or rumored to be released or rumored not to return.

It was controlled irritation using a blank canvas that failed to articulate unsubstantial speculation. All of which begins with: The Bengals could be interested in _________ (high-profile name), using a formula of knowing the player's name and knowing that your team could use help at the position that that player plays.

Eventually irritation reverted level-headed thinking. Again it occurred to me that speculation is the engine for conversation, discourse and debate during the offseason. It's the stationary bike that keeps our football minds alert. It's not only mostly idle entertainment, but somewhat necessary.

According to Jason La Canfora with CBSSports.com, New York Jets owner Woody Johnson doesn't believe cornerback Darrelle Revis will stay with the team when his contract expires after this season (Revis has a three-year player option that he can decline). To maximize the return for one final investment, the Jets are reportedly open to trading Revis.

Makes sense. If you are unable to vision a scenario for your best player returning after his contract expires next season, milk his value through a trade. New York's roster is hardly made up to rotate new and improved talent, idly waiting for their opportunities as future All Stars. Not to mention that they're $17 million over the projected 2013 salary cap, making free agency somewhat unreliable and very untenable. The Jets need draft picks. And we doubt a two and/or a five will satisfy the need. You have someone like Revis to dangle on the trade stick, you're looking for an advantageous investment.

Yet do the Cincinnati Bengals need cornerback Darrelle Revis? My arguments side with "no" but they do need the money and draft picks it would take to acquire and keep Revis. Would you rather have Michael Johnson, Andre Smith and the draft picks? Trading for and signing Revis would ensure that either Johnson or Smith are gone and the draft picks that would be used to replace them are also gone.

"According to someone familiar with his thinking," writes Mark Cannizzaro with the New York Post, "Revis is seeking a contract similar to or 'just north of' the deal the Bills gave defensive end Mario Williams — six years, $96 million with $50 million guaranteed. That is the largest contract for a defensive player in NFL history."

Go ahead. Scratch his name off the parchment. Unless you're going with the one-year rental route, losing the draft picks and Revis after 2013. If that's the case, we have your ticket to Briarcliff Manor.

Jason La Canfora also reported on Monday that it's "highly unlikely" Reggie Bush returns to Miami in 2013. Other free agency possibilities at running back include Shonn Green, Felix Jones (and you were worried about Bernard Scott's durability), Peyton Hillis (eww), Rashard Mendenhall (not a "team player"). Bush likely becomes one of the top running backs in a weak class of free agents.

According to Pro Football Focus, Bush is one of the worst free agent running backs in the NFL with a -2.6 grade. Peerman again ranked No. 8 with a (positive) 2.7 score. Plus if you had a problem with Cedric Benson's fumbling woes in 2010-11, get used it from Bush, who has fumbled it 14 times in four seasons and 27 times in his seven-year career.

Granted the cost for Bush wouldn't promote hesitation for discovery that begins with a phone call. Yet only 18 days after the Miami Dolphins reportedly made a "team-friendly contract offer", reports surfaced that it was "highly unlikely" he'd return to Miami. On the other hand Miami has been dealing with Jake Long demand for a reported $10 million per season, by reportedly making a "low-ball" offer last week.

The moral of the story is this.

The Bengals have over 20 free agents this year to worry about, as well as contract negotiations for players entering free agency in 2014. Darrelle Revis won't happen. Call that as close a guarantee without actually calling it a guarantee. Reggie Bush is as possible as any free agent, completely depending on whatever grossly overestimated value he holds within himself.

Maybe we've become our own version of Cosmo G. Spacely, intellectually instinctually shutting down the idea of something new like acquiring a high-profile free agent during their prime. Don't get me wrong. We're open to the idea. We're just armed with heavy weapons to shoot that idea into smithereens.

There we go again.