Physical defense is defining the Bengals identity in 2013

The Bengals defense did what they do best against the New England Patriots. Stone the opposing offense and put the entire team on their collective backs.

Share All sharing options for: Physical defense is defining the Bengals identity in 2013

If you need a big play to win the game, just call Mike Zimmer and the fearsome Bengals defense. There has to be a tee-shirt idea somewhere in there. Maybe we'll include Marvin Lewis' postgame comment that "we're not going to out-cute anybody" when defining the team's evolving identity. While the Broncos and Cowboys challenged the 100-point milestone during Denver's 51-48 win over Dallas (the fourth-highest scoring game in the NFL), the 2013 Bengals are buckling the league's offensive trend.

Whether it's the 58-yard fumble return for a touchdown against the Packers, the game-sealing interception against the Pittsburgh Steelers (twice) or the constant pressure on Tom Brady and Adam Jones' fourth quarter production against the Patriots, you will not find a greater source of motivation than what defines the Cincinnati Bengals this year.

"Coach Zimmer does a good job. We have a good enough defense to stop anyone."-Geno Atkins

It was only fitting that head coach Marvin Lewis handed the game ball to defensive coordinator Mike Zimmer. Not only did the Bengals limit Tom Brady to less than 50 percent passing (18 of 38), but the future Hall of Fame quarterback nervously generated only 197 yards passing, was intercepted late that led victory formation, and posted a passer rating of 52.2 -- his worst performance since Dec. 16, 2007.

Snapped is Brady's streak of 52 games with a touchdown throw. Snapped is the 74 consecutive games that New England scored a touchdown. And taking a break for the evening is the emphasis regarding Cincinnati's ineffectual offense (for most of the afternoon), thanks to a defense that's breaking Super Bowl winning quarterbacks.

Cincinnati's defense was on task early, holding New England to five punts, a fumble and a last second field goal in the first half. Geno Atkins and Wallace Gilberry, who replaced the concussed Michael Johnson, set the tone. On the second play from scrimmage, Geno Atkins dropped Brady for an eight-yard loss on a sack. Gilberry added enough pressure on the following play to influence Brady's progressions into a six-yard check down on third and 14. 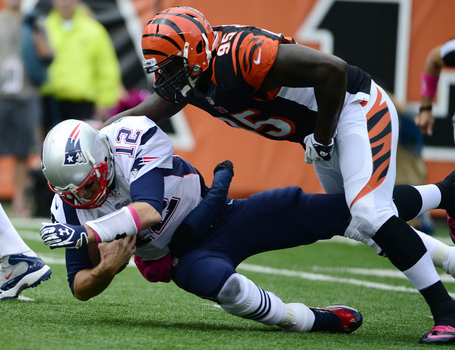 On the following possession, Gilberry continued with excellence dropping Brady on third and two with 9:27 remaining in the first, forcing the Patriots to punt after consecutive three and out possessions. Then on the possession after that, second-round rookie Margus Hunt put a hand on Brady that forced a bad throw to Julian Edelman with over four minutes remaining in the first quarter.

"They call (Gilberry) one of my nuts and bolts, just a guy who keeps working his tail off and keeps doing what he’s supposed to do. He’s good for the football team," said head coach Marvin Lewis after the game in one of the more understated comments of all-time. 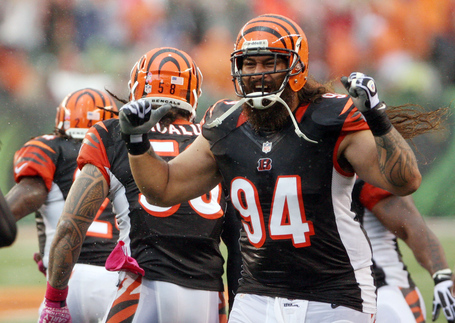 "It seemed like, right away, we were getting pressure in his face," said defensive tackle Domata Peko. "We got him on his back all day today, and a lot of guys were dropping balls — more than usual. It seemed like we executed our game plan. We stopped the run and got after Tom, made sacks, and got the win."

"We just wanted to hit him, and hit him constantly," said Gilberry. "And that’s what we did. Geno Atkins, Carlos Dunlap, myself, Domata Peko and Margus Hunt, we just got pressure consistently up front and kept him rattled all game."

The defensive line was responsible for three quarterback sacks (two by Gilberry, one by Atkins), six hits on Brady, two tackles for loss and a bunch of pressures that forced errant throws.

Give credit to a motivated secondary, led by the cagey Chris Crocker whose seven tackles ranked second on the team. With 1:50 remaining in the third quarter, Crocker dropped Aaron Dobson for a four-yard loss forcing the Patriots to convert a third-and-14 from the Bengals 46-yard line. A low throw to Kenbrell Thompkins forced New England to punt.

Crocker called it a personal challenge.

"We felt like all anyone was talking about was Tom Brady and the offense. We feel like we have great players on defense, so we took it as a challenge," said Crocker. "We wanted to hear people talk about our defense. We were able to put the team on our back and let loose today."

The Patriots only scored twice (field goals) during the six possessions in which the offense crossed midfield. Cincinnati's defense forced two turnovers and two punts on the other four possessions.

And there was the obvious cooperative effort. 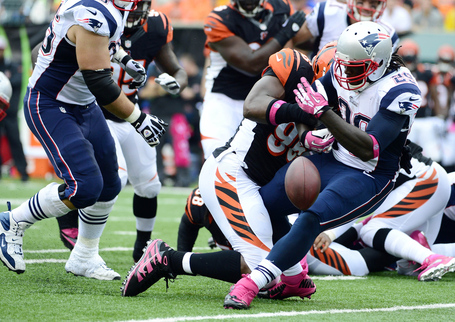 With 8:02 remaining in the second quarter, the Patriots had reached Cincinnati's 32-yard line, in position for a long-distance field goal. Carlos Dunlap, who was called for a horse-collar two plays earlier, yanked the football out of LeGarrette Blount's hands and Reggie Nelson returned the fumble six yards. Offensively, the Bengals stabilized just enough to string together a 49-yard drive that resulted in a Mike Nugent 39-yard field goal and a 3-0 lead.

During New England's first possession in the third quarter, the Patriots reached the Bengals 42-yard line. Tom Brady searches for something, but the coverage was perfect, allowing Vontaze Burfict to sack Brady and force a Patriots punt. Burfict ended with a team-leading eight-tackles -- the fifth time this year he's lead the defense in tackles.

If Cincinnati's defensive performance against the Packers was one of the best we've seen, then Mike Zimmer's crew blew that performance away.

Leading 13-3 with 7:18 remaining in the game, the Patriots quickly moved downfield to the Bengals one-yard line. Blount is stoned by Vinnie Rey and Brady overthrows Nate Solder (OK, then) setting up third and goal from the one-yard line. Adam Jones yanks the football out of Julian Edelman's hands on a sure-touchdown in the endzone, forcing the incomplete pass. Instead of going for it on fourth down, Stephen Gostkowski converts the 19-yarder, reducing Cincinnati's lead to the eventual final score of 13-6.

Giovani Bernard fumbled on Cincinnati's ensuing possession, giving the Patriots a first down with 3:26 remaining in the game. Not only did Cincinnati's defense stonewall New England for no yards, Wallace Gilberry posted his second sack and a forced fumble (that New England would recover) that would drop New England back five yards. They were forced to punt. 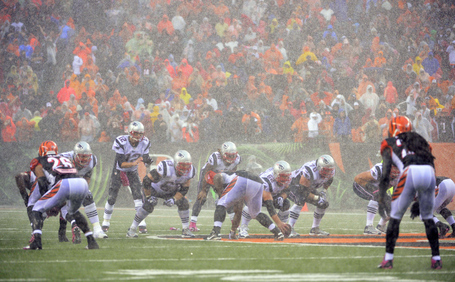 As the football gods dropped buckets of rain with a decent wind that crushed the football's trajectory, and despite Cincinnati's penalties that helped sustain New England's possession to tie the game, Adam Jones sealed the game with an interception on an errant throw.

"We went back to work like training camp and practiced that way," Lewis said. "It showed out here today. Today we competed and we covered. We got away from man-to-man coverage, we played physical and that’s what we have to do. That’s our calling card. Otherwise, who are we? That’s the way we have to play football all the time. We’re not going out-cute anybody. We’ve got to be physical and we’ve got to body up on people and play that way."