There is no bigger hot button issue currently than that of Andy Dalton as the QB of the Bengals.

Share All sharing options for: Andy Dalton - A QB comparison

Recently I have been accused of being an Andy Dalton supporter. If you follow me on Twitter (@WhoDeyFans) you see I am a bit of a Dalton apologist. I can tell you I am not a firm believer, I just withhold my knee jerk reactions and give thought to what I throw out there. I shook my head at the decision making on his red zone interception. I wondered allowed if he was going to be able to "put it together" for this team. I just don't see value in wishing he was dead on Twitter and copying him on the tweet.

Part of me though is still in Dalton's camp. First, the guy is incredibly nice, he is still my daughters hero after hanging out with her at a charity event and is the kind of character guy you want in the NFL. 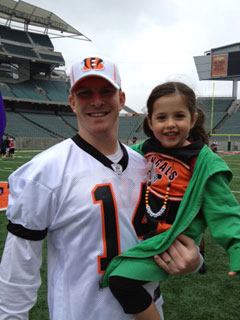 That alone is not enough to sway me. So what is it about Dalton that I still want to support? I think about his throw to Marvin Jones in the 3rd quarter for a 28 yd completion on 3rd and 15. It was perfect. He hit both tight ends in stride to pick up chunks of yds against the Patriots. There is talent, but all NFL QB's have talent.

I start by comparing him to some other quarterbacks in the league. I try and think of similar guys and wonder how they compare.

Below is what I came up with:

When the information is laid out in that table it is fairly telling. Dalton has the top completion percentage, is middle of the line in yds, and touchdowns and is fairly high in quarterback rating. This table shows that Dalton is comparable to all these other QB's. 3 of them have Super Bowl rings. Are there quarterbacks in the table you would rather have leading this team? Why?

Dalton has not had to put this team on his back and win games. The Bengals are built on the foundation of a great defense. Tom Brady looked horrible yesterday and that was by design. Dalton did enough to win the game for the Bengals. In the end, this is all you ask for.

The QB I most compare Dalton to is Alex Smith. As you remember Smith was released by the 49ers and signed with the 5 and 0 Chiefs. This is a Chiefs team that is holding opposing offenses to an average of 11 points a game. This is much better than what the Cincinnati defense has done to this point. Smith is reaping the benefits of the defensive unit in KC.

Do you have confidence that Alex Smith could rally from 16 points down in the second half to come back and beat the Packers? I don't. Yet you don't hear Chiefs fans screaming for the deep ball or cursing his inaccuracy.

Can Alex Smith take the Chiefs to the Super Bowl? When the defense holds opposing offenses to under 12 points he can.

The point is, I think Dalton is a fine quarterback for this team. He does misread, he does have accuracy issues at times and he has thrown some terrible interceptions. 3 of the 5 are arguably not his fault. The hope is he continues to progress and has a defense that can back him up doing it.

Teams have made deep runs on the strength of their offense or the toughness of their defense. The Bengals have the potential to pull both together this season.

The Bengals have topped the Steelers, Packers and Patriots in this young season. This is the part of the schedule where everyone thought they would struggle. They did, but it was against the Browns. This team is in better shape then some on the web would have you believe.

Winning has a way of changing peoples minds. As long as the Bengals continue to win, the anti Dalton crew will become a little quieter. But, just like all of you who can't wait to say I told you so on the next bonehead Dalton play, I am crossing my fingers that I can say "I told you so" at the end of this season.