Examining the rest of the offense and their production issues

As Andy Dalton shoulders the blame for Cincinnati's 20-17 loss to the Baltimore Ravens, we take a look at the rest of the offense and their issues.

Share All sharing options for: Examining the rest of the offense and their production issues

No doubt that Andy Dalton is shouldering much of the blame from Cincinnati's overtime loss in Baltimore. Some of it warranted, a lot of it isn't. Deflecting the need to justify our viewpoints as one-sided in the sphere of poor political decorum, the reasonable question is, how is the offense performing collectively.

The worst of it comes from Jason La Canfora with CBSSports.com, who justifies a two-game struggle as "regression". In one of the more inflammatory pieces authored on Monday, not only does La Canfora fail to account for more than just the quarterback, he writes that Dalton "gave the Ravens' season new life." Not the two first down gains allowed by the defense after the 11-yard loss on Giovani Bernard's scramble on fourth down. Nor the 42-yard Mike Nugent miss earlier in the game that should have turned A.J. Green's 51-yard touchdown into a game-winner.

Dalton's three interceptions against the Dolphins, and the game-ending sack he took in overtime, prevented Cincinnati from coming away with a victory in Week 9.

You're in luck Mohamed Sanu, whose failure to haul in a reception against Miami directly led to an interception. You too, Kevin Zeitler, who allowed Cameron Wake's game-winning safety for a quarterback sack. 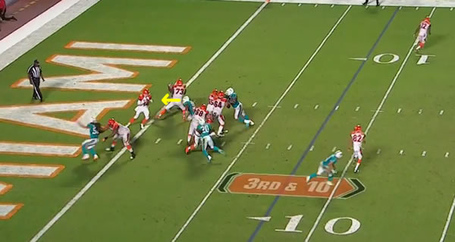 And somehow La Canfora, who gave Lardarius Webb credit for "prying the ball away" from Marvin Jones in the third quarter, blamed Dalton for that because that "turnover would end up looming large in such a close game." Actually Baltimore failed to pick up a first down and punted after Cincinnati forced a three-and-out.

Dalton struggled. Quarterbacks struggle. Even elite Pro Bowl players struggle. Unfortunately an unsuspecting public may take a perspective like La Canfora's as gospel and that's dangerous. We could argue that half of Dalton's six interceptions in the past two weeks weren't his fault -- the others clearly were.

But why completely ignore the other talking points about struggling offensive players? Is it because Dalton is the obsessive microscope that gravitates the less-informed or does it help prevent kidney stones?

"They were catches we’ve seen our guys make, it wasn’t like they had to be circus catches or anything. They were balls in our hands that we can catch and make plays. One was for a touchdown, others for first downs. We’ve just got to keep going. So that’s why I say, the quarterback always get to be the focus of things, but his day would have been helped out by some of these other things, finish what we’re doing and making sure guys are 100 percent on everything on their jobs. And he cleans them up a bunch which is good. He bails them out a bunch. But we need to be better."

Marvin Jones failed to secure a second and eight pass in single-coverage over the middle with 3:56 remaining in the first. A bit high sure, but catchable for the player that caught four touchdowns only two weeks ago.

With 10:38 remaining in the second, Dalton lobs the football over Baltimore's defense for Tyler Eifert. But in his defense, there was a roaming safety readying a significant pop.

Eifert had two more drops on Cincinnati's opening possession in the third quarter, including one that could have gone for a touchdown (admittedly the defender made it extremely difficult and it would have been labeled as amazing... not that we drafted him in the first round for that or anything).

"Everybody has a bad day. You try to come back the next week and have a great one," said Whitworth via Bengals.com. "To me, that’s the most crazy stat in the world. D-linemen can have one sack a game and you're a Hall of Famer. That means you win one out of 40 times. Whereas an O-lineman, you lose one out of 40, you're never playing in the NFL again."

Bengals starting center Kyle Cook, who had the greatest pass blocking score on Sunday (per PFF), didn't see issues with the protection scheme itself, but did note that Baltimore's coverage may have forced Dalton to hold onto the football entirely too long.

"I don’t think there were any protection issues as far as responsibilities," center Kyle Cook via Bengals.com on Sunday. "Maybe coverage forced some protections to break down late. It’s hard to know without watching the film."

"We can't get down on ourselves," Dalton said via ESPN. "There's a lot left in the season, and we can control our own fate. We are still in a very good position with a lot in front of us, and we just need to play our best."

Now if those words can only be translated on the field.

Bengals starting guard Kevin Zeitler was seen wearing a boot on Monday after suffering an injury against the Baltimore Ravens. We suspect that the play might have been the first in the fourth quarter. At the end of the GIF (below), you see Zeitler gripping his leg after being rolled up from behind.

It's not uncommon for a player to wear a protective boot following a game. There are instances where players have worn one but were capable of playing the following week. And if not the next game, then the week after that. However, Zeitler was also sporting crutches on Monday to keep as much pressure off the leg as possible. The Bengals may elect to sit Zeitler against the Browns, giving him two weeks with the bye week afterwards.

Still, that's one tough dude. He didn't miss a snap at all with an entire fourth quarter and overtime remaining.

I'm disgusted by the lack of confidence in Mike Nugent.

There are some questioning why the Bengals didn't attempt a field goal in overtime to give Cincinnati a 20-17 lead. Due to the league's relatively new rules on overtime, it wouldn't have been a game-winner because Cincinnati didn't score a touchdown and Baltimore was due a possession as a result. Had Mike Nugent attempted the 50-yard conversion, he'd have battled significant enough winds that twisted a 42-yarder wide left earlier in the game.

Instead, Jay Gruden drew-up a quick flair out of the backfield for Giovani Bernard. With James Ihedigbo quickly reading and reacting to the play, Bernard changed directions and eventually lost 11 yards.

Hindsight is a bitch.

Had Mike Nugent missed, the field position would have been similar to the placement following Bernard's lost yardage. Punting the football is an option, but if rolled into the end zone, then the net gain is only 13 yards.

The greater question is why not pounding the football with BenJarvus Green-Ellis on consecutive runs.

Would you extend Michael Johnson's contract?

Per league rules, Cincinnati isn't allowed to sign Johnson beyond 2013 until free agency. My overall perspective last year, when this topic was raised, was based out of hesitancy. A significant jump in Johnson's production from 2011 to 2012 could have been an aberration, therefore the team risks applying prohibitive contracts for defensive ends like the one's they had with Antwan Odom and Robert Geathers several years ago based entirely one great year.

Clearly, he's one of the best defenders on Cincinnati's roster and has sustained that production, if not become an even better all-around player. Considering that he rejected a five-year deal worth $40 million a couple of months ago, you have to realize that he'll be fairly expensive to keep in Cincinnati, especially with A.J. Green, Andy Dalton and Jermaine Gresham entering the final year of their respective deals.

However, I'd love to see Carlos Dunlap and Michael Johnson book-ending this defensive line for many seasons.

Should the Bengals draft a quarterback in the first round of the 2014 NFL draft.

Is it time to call Dre Kirkpatrick a bust?

Using the term "bust" is an inflammatory description, but calling Dre Kirkpatrick a bust is entirely unnecessary right now. A perfect example would be to apply the story of Andre Smith, who not only had questionable work ethics, motivation, and durability concerns, he didn't have the most promising start when he actually played.

While you'd hate to sit around and wait for a first-round pick to develop into a significant contributor, giving up on Kirkpatrick isn't necessary right now. Plus the team is secured with contracts in the defensive backfield; Leon Hall (2015), Terence Newman (2014) and Adam Jones (2015) are signed through next season. But we have to see something before the end of the year to keep an optimistic mindset.

By virtue of a tie-breaker, the Cleveland Browns maintain second place at 4-5 while the Cincinnati Bengals, once again, are in a confidence-building scenario. Perhaps they'll actually be a little pissed off for some redemption against Cleveland for a second-half run to claim the division.