The Cincinnati Bengals may have one of the best tight end teammates in the NFL with Jermaine Gresham and Tyler Eifert.

When it's all said and done, Cincinnati Bengals tight end Jermaine Gresham and Tyler Eifert will pool together one of the best seasons by any combination of tight ends in franchise history.

Through 11 games (Jermaine Gresham missed the Ravens in week 10), both have combined for 66 receptions for 725 yards and three touchdowns. At this pace, Gresham and Eifert will combine for 96 receptions, 1,055 yards receiving but only four touchdowns.

Drafted to be a compliment to Jermaine Gresham, not a replacement, Eifert has seen his share of targets (50), comparable to Marvin Jones (50), Mohamed Sanu (59), Giovani Bernard (50) and even Gresham (53).

"I don’t think a lot of people have two tight ends like we have," said offensive coordinator Jay Gruden. "We are just trying to make it hard for the poor coach on the other team to break us down (in game-planning). We’re just scratching the surface here, but I think we’re throwing a lot at defensive coordinators and making them work a little bit."

Eifert has already accumulated a handful of impressive catches, from the 61-yarder against the Steelers (longest by a Bengals tight end since 2004), the 32-yard touchdown against the Lions against tight coverage and the 40-yarder against Baltimore, tip-toeing the sidelines.

With over two minutes remaining in the first quarter, the Bengals have first down from their own 26-yard, down by three points. Eifert's go-route took him into a region uncovered by the Steelers zone defense. 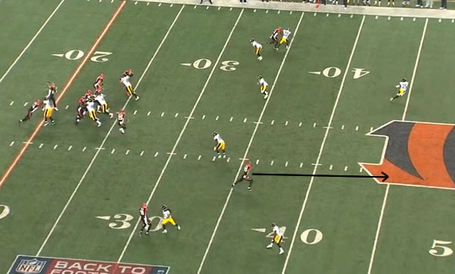 With over 11 minutes remaining in the third quarter in Detroit, the Bengals have second and five from the Lions 33-yard line. Eifert and Gresham are in as the Bengals played a run-first package keeping a fullback (Alex Smith) and A.J. Green as the lone wide receiver. Eifert ran an out and up against defensive back Rashean Mathis, out-jumping him at the front of the endzone for a touchdown. 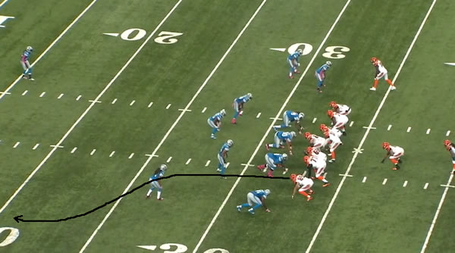 "(Eifert will) go up and fight DBs for balls and out-jump them," former Colts General Manager and current ESPN analyst Bill Polian said. "He’s got long arms and a long body. He’s a good jumper and he can make catches in the air, which is hard for people to do. Dallas could do that, too. He can get off the ground and catch the ball exceptionally well. At the college level he won the vast majority of contested balls that were thrown to him. He’s unique in that way."

Gresham hasn't been the big-play tight end like Eifert, instead more of a power player in short-yardage scenarios while monstrously running through tackles requiring multiple defenders to bring him down.

"Jermaine is really good at that," said QB Andy Dalton. "Once the ball is in his hands, he makes guys miss and finds ways to get first downs."

The aspects of their game that could use work currently are penalties, drops, and run blocking. By penalties, we really mean Jermaine Gresham's eight fouls (one declined), six of which are false starts (3) and offensive holding (3). That currently ranks second on the team and first on offense.

Tyler Eifert is currently tied for second on the team with most drops (five with Mohamed Sanu), all sitting behind A.J. Green's eight. Gresham has dropped three passes, but that's comparable to the three drops by Jason Witten, Vernon Davis, Brandon Pettigrew and less than Antonio Gates, Julius Thomas, and Scott Chandler.With both plays scoring poorly in run blocking, it's just another aspect for their eventual development as teammates.

One they get those things figured out, there's only one direction for these tight end teammates to go.