Unsure if you'll see the Bengals and Ravens on Sunday? We have your answer.

The Cincinnati Bengals will kickoff their series opener against the Baltimore Ravens -- their division rivals, and preseason favorites. Both teams are facing critical scenarios; Cincinnati needs to wipe the stain from Thursday's loss to the Miami Dolphins and the Ravens need to get back into the race to prevent a 3-6 record through ten weeks.

It'll be a divisional slobbernocker.

Fortunately, mostly the entire country will see the game live on CBS -- save for the markets showing their own home teams. 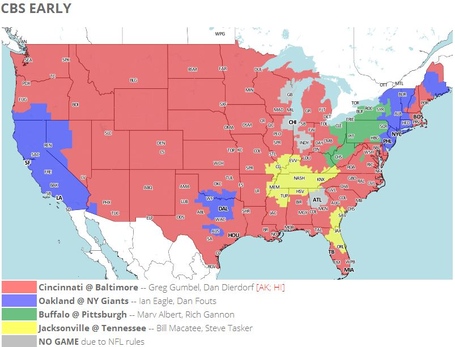 CBS has the double-header this weekend and the late afternoon game will feature an AFC rivalry between the Denver Broncos and San Diego Chargers. Like the Bengals and Ravens, this game will be show prominently throughout the states, save for southern Texas and most of Arizona due to the Texans playing the Cardinals.

Cincinnati will also have the late afternoon game on FOX between the Carolina Panthers and San Francisco 49ers.