Bengals wide receiver Andrew Hawkins is slowly returning after spending the first half of the season with a high-ankle sprain. When he's fully integrated and healthy, someone will lose playing time.

With 5:08 remaining in the fourth quarter and the game tied at 17, the Bengals have second down from the Dolphins 34-yard line. Andy Dalton takes the shotgun snap and delivers a well-placed throw over linebacker Dannell Ellerbe. Sanu couldn't complete the transaction and the football shot into the air like a volleyball. 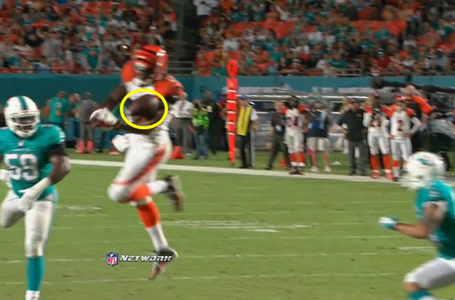 Ellerbe returned the interception nine yards, driving a stake through the Bengals offensive possession that was destined to for points and an eventual lead. It's not the only time that Sanu has been featured as the main antagonist in a critical fourth quarter turnover. While holding a 21-17 lead early in the fourth quarter against the Bears in week one, Sanu lost a fumble at Cincinnati's 17-yard line. Chicago's resulting possession resulted in a touchdown to take a 24-21 lead -- the game's eventual final score.

Admittedly Sanu has been dealing with a shoulder recently, which may reflect his overall struggles recently. On the other hand, while setting a season-high six receptions on nine targets against the Dolphins, in two of the past three games, Sanu has only caught one pass and three of the past five, he's recorded only two receptions or less.

Last year's second-leading receiver Andrew Hawkins played his first game of the year last week after missing the first eight with a high-ankle sprain. Granted, Hawkins, who posted a ten-yard reception in the second quarter against the Dolphins, only played seven offensive snaps, but that will change. His speed, evasiveness, quickness and improvisation are too great to leave on the bench and with the team having ten days between games after Miami, he'll continue to re-integrate as a significant threat while accelerating his conditioning.

The question, which has patiently hidden itself in the shadows, asks: Who would be odd man out when Hawkins returns?

At this stage, the answer has to be Sanu.

It sounds funny, to be honest. Sanu has started every game this year. He's third on the team with 31 grabs, and fourth with 316 yards receiving.

Yet he's the only player with more than five receptions and no scores. He has surpassed the 50-yard milestone three times... but blaming that on him might be unfair -- considering Dalton's obsession with A.J. Green earlier this season, limiting the opportunities for other players. Sanu has also dropped five passes (according to Stats, Inc), which ranks as the tenth-most in the NFL (Green has six but also has double the amount of targets).

But it's not about that.

It's the others that are simply out-performing him. Only four players in the NFL have more touchdown receptions than Marvin Jones, who leads the team with seven scores. And 22 of Jones' 28 receptions have led to first downs. A.J. Green leads the NFL with 862 yards receiving and two receivers in the league have more receptions than Green's 57. They're obviously not losing their playing time.

It's all a matter of when Hawkins is 100 percent.

He was clearly not the ol' Hawk last week and arguably, at this stage, the recovery is as much mental as it is physical -- does he have the confidence in his ankle for sudden cuts and redirection.

If the team feels that he's ready to become the greater contributor that we're expecting in the second half this year, the ideal scenario has Jones and Green on the outside with Hawkins in the slot. Perhaps the team will keep a Green/Sanu combination in two-wide sets, which has been the overall philosophy this year allowing the distribution to be more balanced behind Green. Yet, with tight end Jermaine Gresham dealing with a groin and a game-time decision this Sunday against the Ravens, the Bengals may apply more three-wide sets than they have all season (even if he does play).

This isn't to say that Sanu isn't worth believing in.

To me, he has every skillset required to become the best possession receiver on Cincinnati's roster while being versatile enough to play anywhere on the field. But as has been the problem for many this year, it's a numbers game. Someone has to be take the fall for those that rise and right now, that might be Sanu.