The Bengals have extreme interest in the Patriots and Dolphins game, considering that either team will benefit the Bengals in some way.

Share All sharing options for: TV Coverage Map: Cincinnati has Patriots and Dolphins

With the Cincinnati Bengals playing Sunday Night Football (NBC) against the Pittsburgh Steelers, it means that, as Bengals fans, we have a completely free afternoon to watch, do, say, and enjoy as we please. If the goal is to sit around and watch football, then you might have an interesting game to watch. Several regions in the country, including Cincinnati, will have the New England Patriots and Miami Dolphins on CBS this afternoon. 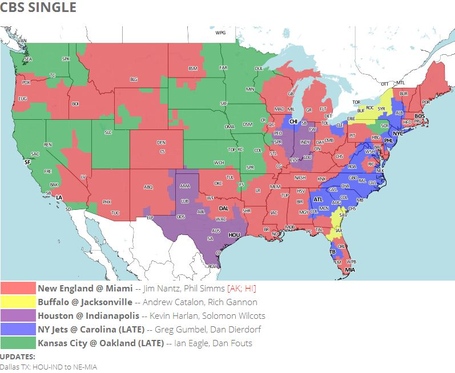 Considering that the Bengals to win, Cincinnati clinches a postseason berth with a Miami loss or slides into the No. 2 seed with a New England loss (however they won't know if they're in the postseason until the conclusion of Monday Night Football). But yes, ultimately a Patriots loss (more rewarding) is more important than a Dolphins loss (immediately satisfying).

If you're in the Cincinnati region, you'll also get the Chicago Bears at Cleveland Browns (1 p.m) and Green Bay Packers at Dallas Cowboys (4:25 p.m) on Fox. Check to see your coverage at 506Sports.com.