Not sure if you'll get the game this weekend? Because the game still isn't sold out, you might not. But for the rest the country, you probably won't.

Either way, if you're anticipating watching Sunday's game from anywhere outside of the Cincinnati market and surrounding regions, you're probably out of luck.

The Bengals will be FOX this weekend (Dick Stockton, Ronde Barber), which only has one game this week (CBS has the double-header). That translates into six games on FOX being jammed into the nation limited the coverage for Bengals fans.

If the game sells out, most of Ohio will have the Bengals and Vikings, as will eastern Kentucky, parts of West Virginia, Pittsburgh and Indiana. The Boston region will have it, presumably due to the impact in the race for the second seed, and an extreme northern tip of Maine. 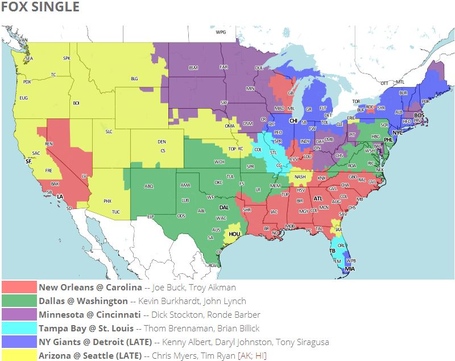 If you're in Cincinnati, we won't get an early CBS game but the late afternoon contest will be the Ravens and Patriots for obvious reasons.