We picked three random completions against the Minnesota Vikings, showing why Andy Dalton is clearly improving as the year comes to a close.

When all of the "strong armed" arguments are made about Dalton, many had concluded that it's an issue of throwing the deep pass -- considering he's statistically one of the more successful deep-throwers this season (with a little help from his receivers), that argument seems silly. But it wasn't really that. The argument was based on the arm strength on 10-15 yard routes on an out-pattern.

With over 14 minutes remaining in the second quarter, the Bengals have third and seven from their own 22-yard line. Marvin Jones is wide left, opposite of a trips formation with Andrew Hawkins, A.J. Green, and Jermaine Gresham on the right. Dalton quickly looked right, then scanned towards Hawkins' crossing route before he eventually settling on Marvin Jones' out. Dalton artistically placed the football in an area only accessible by Jones.

Not bothering to risk a challenge on the play (Jones appeared to have gotten a second knee down), Dalton rushed everyone to the line of scrimmage and ran the next play. Solid read. Good throw. Great catch. First down. This has only been a part of Dalton's overall progression that we've seen recently.

From developing a greater comfort and confidence in Marvin Jones, Dalton's presnap reads against the Vikings (who, seriously shouldn't be confused as the greatest defense or anything), and his confidence coming through on his touch-passes, it's evident that Dalton is improving.

Two plays later, Dalton hit on 13-yard gain that crossed midfield at the 13:17 mark in the second. It's not the ease from which Jones ran the slant; rather Dalton's throw over two surprised defenders, who were tracking Jermaine Gresham out of the backfield with a defender in front of him. Read. React. Throw.

Let's backtrack a little to the 2:30 mark in the first quarter. The Bengals have third and ten from midfield and spread formation with Jones at wide left. Jones, A.J. Green and Mohamed Sanu run deep curls while Jermaine Gresham and Giovani Bernard chip-block before setting off to their flair routes. 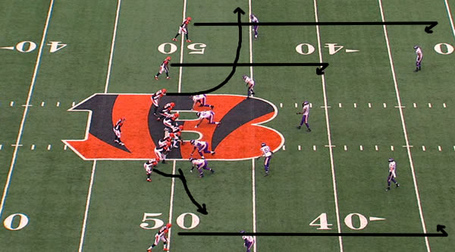 When Jones broke down to spin around for his route, Dalton started his release, seeing that coverage had allowed a significant amount of space for Jones. Dalton's throw was perfection with just enough touch to glide over the defender.

Back to the deep pass argument? Two plays later, Dalton and Green did this: