Of Facebook's 35 million account holders, one out of ten have declared their allegiance to an NFL franchise. The results may surprise you.

If you've ever wanted to know how the Bengals fan base looks when illustrated onto a map of the United States, Facebook has compiled some nifty illustrations based off of data they compiled by tracking "likes" of an NFL team for every Facebook user. Roughly 3.5 million Facebook users have "liked" an NFL team, and Facebook is calling their research "one of the most comprehensive samples of sports fanship ever collected."

"While winning seems to matter, NFL teams have local followings that are probably heavily influenced by family ties and/or where a person grew up, so we were obviously curious to see where the fans for various teams live now. By considering the physical locations of NFL fans, we can construct a map of the top team for each county in the US. It tells an interesting story about the ways that football rivalries and allegiances alternately divide and unite the country, and sometimes even individual states." 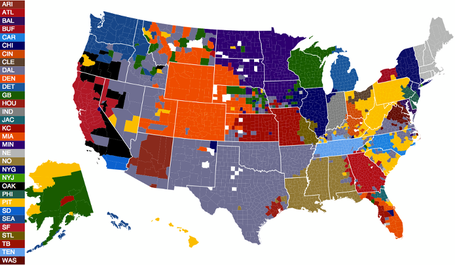 Now, if you're even partially colorblind, you may need some help with this one. 32 teams leads to three different shades of orange on this map, but I think we can all conclude which orange is Miami, Denver, and so on. What's fairly alarming in this map is the fact that Pittsburgh fans override about half of the state of Ohio. In other words, Bengals fans and Cleveland fans collectively tie Pittsburgh fans in the Buckeye State.

There are a few things to consider as we look at a sea of yellow oozing all over the state of Ohio. First, it's important to mention that Facebook's conclusions act almost as the Electoral College. The true numbers are taken away and each county is given a sort of winner-take-all scenario. In other words, we don't really know exactly how many Bengals fans (or Browns fans, for that matter) are "liking" their team. We only know who's winning over a specific county and therefore getting their pigment on Facebook's fancy map. Second, naturally geography comes into play. A large portion of western Ohio is closer to Pittsburgh - simple as that. Also, Ben Roethlisberger's legacy is littered all over the state of Ohio. Rothlisberger was born in Findlay, OH (or Lima, OH depending on which source you believe) where he also attended high school, and he played for three years at the University of Miami in Oxford, OH. See the chunk of yellow in the Northeast? It's likely that Big Ben's hometown fans occupy that space.

A reason for fan saturation that we shouldn't overlook is the success of a particular team. The Steelers have experienced so much success in the AFC North that it shouldn't be too much of a surprise that they're "liked" all over Facebook. Some of it may truly be fans, and others may be individuals that just want to get behind something popular.

"Making the playoffs, whether you win or lose, seems to give a team's Facebook page a huge boost in fans. Some people just like to hop aboard the bandwagon."

Fair enough. One map that I particularly enjoyed more than the one illustrated above, is how playoff teams swarmed the map in January. Take a look at the Bengals when the 20 non-playoff teams were removed from consideration: 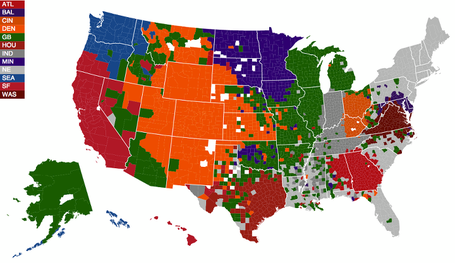 After the Bengals were eliminated from the playoffs, the Packers took over most of the Midwest. Today, most of Ohio is rooting for the 49ers with a tiny little chunk in the southwestern corner of the state rooting for the Ravens.

I highly recommend checking out some more of Facebook's research. It may have some flaws, but it's hard to argue that it's one of the more comprehensive studies of fan loyalty, as they've proclaimed.