The Walking Dead: Comparing The Characters To Bengals Players and Staff

The Walking Dead mid-season premiere is this Sunday on AMC at 9/8c. Let's compare characters of the show with Bengals players (and staff) so we have an excuse to discuss The Walking Dead on Cincy Jungle.

Share All sharing options for: The Walking Dead: Comparing The Characters To Bengals Players and Staff

As much as I enjoy writing about and discussing sports, a big part of my interests involves movies, television shows and literature, much of it favors fiction, specifically science fiction. I'm a nerd.

With the mid-season premiere of AMC's The Walking Dead this Sunday, I got to thinking: I've read every issue of The Walking Dead comics to date, and the television show is a wonderful interpretation of the dreary and desolate universe that Robert Kirkman has created. I also love talking and writing about the Cincinnati Bengals as an unconditional fan. Can we combine the two?

So without further delay, I bring you The Walking Dead: Bengals Edition.

(This list will contain some minor spoilers and refer specifically to the television show and not the comics.) 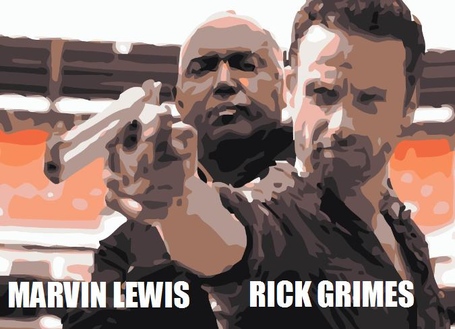 Rick is the sheriff/leader of the lot. He emphasizes morals and values and is left making the tough decisions for the betterment of the group. He's the (mostly) undisputed leader, though criticized at times for his tough decisions, and can be empathetic to a fault.

There are moments when Rick has to make decisions while in the moment that in hindsight were maybe not the best.

Marvin Lewis, much like his superior Mike Brown, can be loyal to a fault at times. He stands by his convictions and makes decisions based on what he believes to be right regardless of how you may feel about it. As a fan, you know the feeling: Marvin goes for a fourth and long, or throws a challenge flag that you could dispute from the vantage point of being on a barge on the Ohio river, and you simply shake your head in disappointment. I did the same when Rick opted to visit the Center for Disease Control in season one rather than continue with the original plan of driving to Fort Benning. What Grimes and Lewis both share is integrity. Both put themselves on the line for the sake of the team and don't dabble in deception. 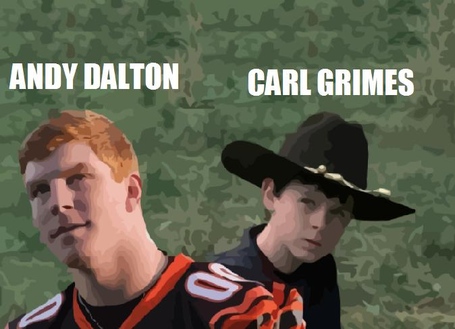 Carl began as an innocent youth in the series, but as the barren and threatening world around him becomes more of a reality, Carl begins to adapt to his surroundings. He's been toughened by an apocalypse of the undead and witnessing those he loves die around him.

Okay, so maybe Andy Dalton didn't have his loved ones perish all around him (I'm trying so hard to avoid Walking Dead spoilers here), but Dalton's bright-eyed innocence in 2011 was met with the apocalyptic force that is the AFC North. A specific moment for Carl that can easily be compared with Dalton is in season two when Carl became extremely ill, only to rise up and earn a rite of passage into adulthood by facing his fathers enemies as well as the usual plethora of zombie havoc.

Carl had to accept his leadership role after being challenged by both his father and the circumstances surrounding him. Dalton was specifically challenged by Marvin Lewis to step up and lead the Bengals. Shortly after, the Bengals went on a tear as they recovered from a 3-5 start to the season, winning their remaining seven of eight games.

Dalton may have helped lead the Bengals to consecutive postseason berths, he's had his share of struggles. He was tormented behind his offensive line, especially later in the season, while being sacked 46 times. There were games when Dalton seemed to lack focus while under pressure, and the offense as a whole experienced games where they almost completely slumped on the field. Could Dalton emerge from the darkness to become a true leader of a championship caliber team? Was 2012 Dalton's "Empire Strikes Back" only to lead to a celebratory "Return of the Jedi" in 2013? Sorry, I'm getting off track here and adding way more nerd than what you signed up for. But is that really a surprise here? 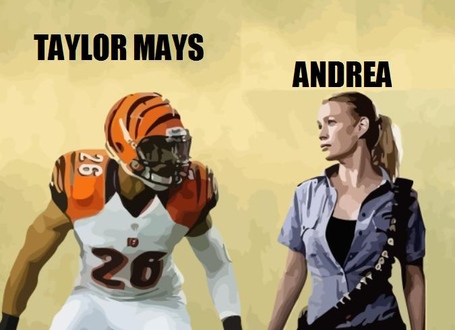 Oh boy. Where to start with Andrea?

She's easily one of the more polarizing characters of the group. Andrea may have good intentions, but she's repeatedly made rash and irresponsible decisions. Clinging to hope of a better life and the constant need to prove her worth at any opportunity has been the downfall of Andrea's faulty logic. She tends to jump at any opportunity to prove herself as a serviceable member of the group, but gets tunnel vision when she believes she gets her "moment," at the risk of everyone around her.

Thinking of Andrea brings me back to preseason 2012 and Taylor Mays. Like Andrea, Taylor Mays wants so very badly to prove he's a playmaker. Dating back to preseason, Mays showed a tendency to zone-in on making a play to the point where he loses his surroundings to a point that both Rey Maualuga and Vontaze Burfict were injured bystanders from his actions.

In The Walking Dead, Daryl knows all about what happens when Andrea selfishly wants to take her shot and prove herself (see season two). Mike Zimmer was quick to get Nate Clements involved at the safety position so crisis averted in Cincinnati, but Andrea could still be responsible for a lot of destruction if someone doesn't put her in check. 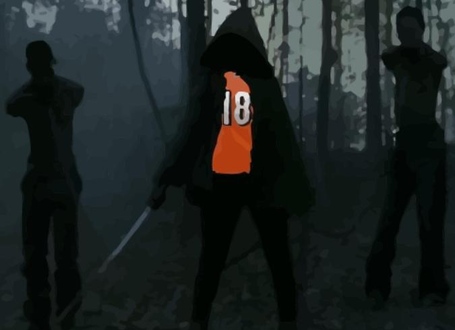 Michonne is an independent survivor that doesn't exactly show the widest range of emotions. However, she's arguably one of the best survivors of the group. She's clever, hardened by years of isolation, but still empathetic for others around her. In terms of zombie manipulation and eradication, she's a veteran with a pretty awesome katana that she wields around the wastelands.

While A.J. Green doesn't have the tragic backstory of Michonne, he compares to her in many other ways. Green, like Michonne, is one of the most valuable players on his squad. He's generally quiet. He goes about his business and only speaks when necessary, but he cares for his team and his craft. Michonne operates the same way. Her skill set is invaluable for any group she's a part of, and even the Governor would do anything to bring her to his side. 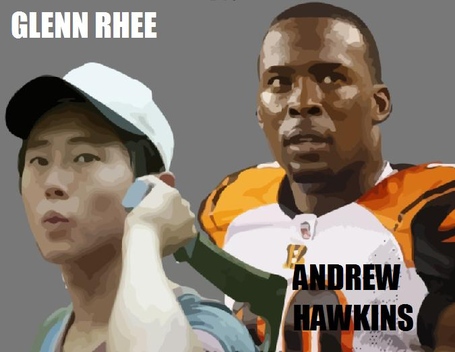 Glenn went from being a pizza delivery boy to a valued member of Rick's zombie-surviving group. Andrew Hawkins went from working in a wind-turbine factory in Toledo to becoming one of the more valued offensive players on the Bengals roster. Both are skillful and quick-thinking individuals that are strong contributors to their group. Both have a passion for life and for what they do on a day-to-day basis, and are always a source of optimism when times are bleak. 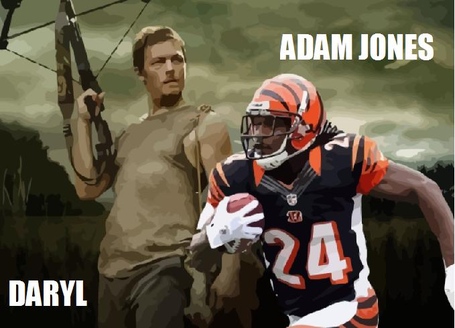 Daryl is a hunter and expert tracker living in the shadow of his brother Merle. He was initially a volatile member of the group, but his survival skills are practically second to none. Over time, Daryl became a supporting member of the group both as a proficient zombie annihilator as well as a personal friend to many.

Adam Jones was big play-maker, but he was trouble. He had plenty of run-ins with the law before he even considered becoming a Cincinnati Bengal, and many fans were concerned that bringing Jones along for the ride would only cause more trouble than it was worth.

Daryl was a potential hazard primarily because of his brother Merle possibly influencing his decisions over time. Many people in the group viewed Daryl as an extension of his sinister brother, and Daryl's off-putting attitude didn't seem to help matters.

Like Daryl, however, Adam Jones buried his dark past and became an extremely productive member on the Bengals. He's always quick to rally fans through social media and in interviews. He seemingly is sincere in his love for Cincinnati, and its fans have learned to embrace Jones in stripes. 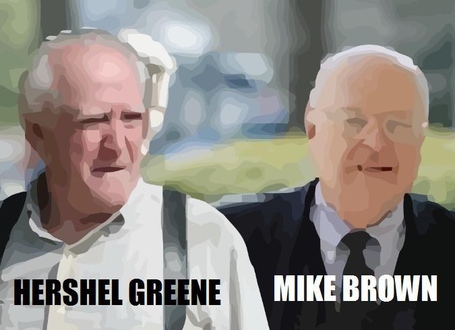 Hershel is the former farmer of Georgia that gave Rick and his crew shelter after Carl was critically shot in the woods by accident. While Hershel is a kind man, he can be stubborn in his views. He absolutely refused to allow Rick access to his barn because he was protecting friends and family who had turned, in a belief that they were still human deep down.

His loyalty to his community is practically unconditional, but his stubborn ways almost led to everyone's death. Ultimately, Rick's crew eliminated Hershel's barn-o-zombies and Hershel eventually gave up control and subscribed to the survival efforts of Rick.

Like Hershel, Mike Brown has been a stubborn owner for over two decades. He's set in his ways and rarely gives control to any other person in position of making decisions for the organization. Over the past several years, Brown has seemingly given more control to his head coach and other members of the front office. It seems to have helped the team, as Brown's loosened grip has given the Bengals a new identity and back-to-back playoff years.

Oddly enough, Brown has presumably given more control to Marvin Lewis, who we just compared to Rick Grimes earlier. Isn't that convenient? 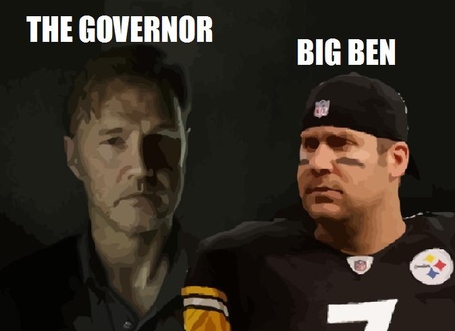 There are plenty of characters and Bengals players to compare, so feel free to add to (or alter) the list in the comments below.

Be sure to check out the Walking Dead premiere Sunday February 10 at 9/8c on AMC.