Friday at the 2013 NFL Combine brought another flurry of press conferences of coaches, general managers and future players answering the same questions..... mostly.

If there's one thing I learned on Thursday, it's that the NFL Combine is crazy. Friday was no different. In fact, as more and more former college players filed into the media room, things just got crazier and crazier. Here's how things went down on Friday. 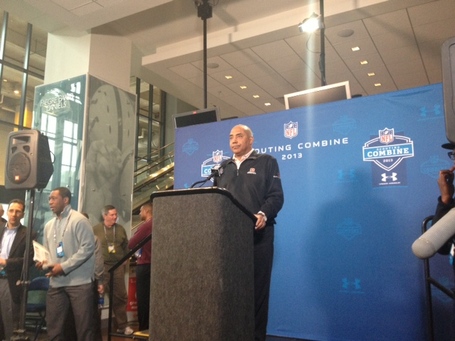 The press conferences are set up on two separate stages facing each other with a large, elevated grouping of network cameras separating them. The majority of the coaches and general managers gave their press conferences from Podium A, while big-name players took Podium B. There was also a smaller stage off to the side, Podium C, where other players address the media. 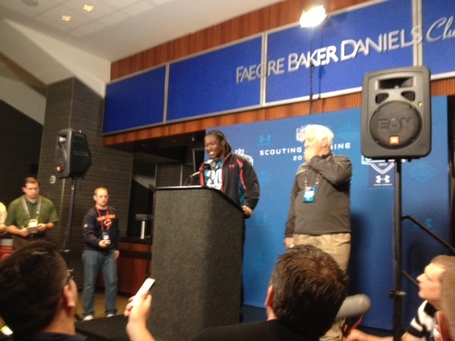 For the players who were from smaller schools or aren't considered top-tier prospects, there are several round tables where they sat. Some were swarmed by members of the media, others were left to sit alone for several minutes while reporters scurried by to interview players they considered more important. 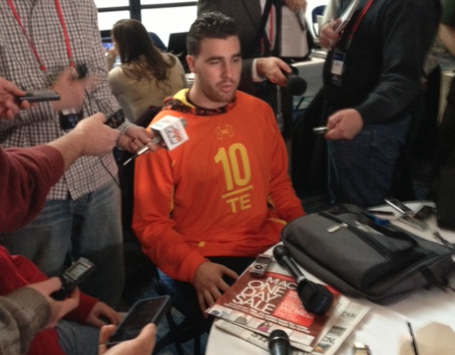 The combine is a funny thing. Since it's only late February, it's a little too early for a team to divulge their draft plans and coaches play their cards a little too close to their chests to discuss their free agency plans. Like every other coach, Marvin danced around the subject of free agency and avoided in depth questions about the upcoming draft. They did talk about certain players that they found impressive and updated the media on injured players, to a certain extent. It was all coach speak, which was to be expected. However, some information could be extrapolated from some of the general comments made by coaches.

As the day wore on, the coach press conferences were beginning to space out while quarterbacks, wide receivers and running backs began to filter into the media room for interviews. The questions players were asked were similar to those you would hear in an average job interview: what are your strengths and weaknesses, what can you bring to an NFL team and have you talked to any teams yet. Some strange questions were asked to throw the prospects off balance, but those were few and far between.

Geno Smith, Eddie Lacy and Giovani Bernard held some of the most packed press conferences as well as several other players including D.J. Fluker, Luke Joeckel and Kyle Long. While I was covering every press conference I could for SB Nation, I was also focusing on players that I could link to the Bengals, asking as many questions as I could. 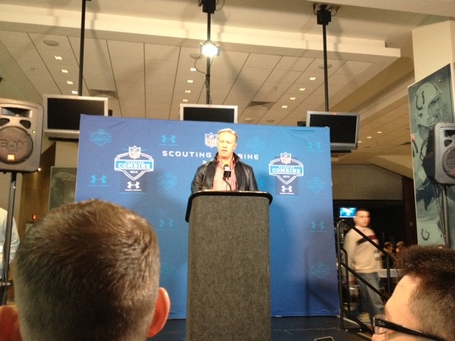 As you would expect, some players have professional help when it comes to how to deal with the media, and you could tell. Others were a little more flustered, but for the most part, all the players seemed professional and knew how big of an opportunity the Combine can create for them. There isn't a place in Lucas Oil Stadium where a player can hide from cameras, recorders or a reporter with a notepad. You almost felt sorry for them.

Most media members weren't able to make their way onto the field, where workouts will begin tomorrow, but, through several TVs in the media room and via Twitter, the results of workouts (many offensive linemen worked out on the bench press on Friday) were pretty much instantaneous.

The team personnel press conferences come to an end around 4:30 while a few players still filtered through. For the most part, though, the day comes to an end around 5 p.m. However, that's when it's time to write. Reporters make their way back to the tables where they set up their computers to transcribe interviews or write the articles for their prospective websites or newspapers.

There are just a couple more coach interviews on Saturday as Giants general manager Jerry Reese and Jaguars head coach Gus Bradley will step up to the podium in the morning. The majority of the rest of the combine will be revolving around player workouts and interviews. Offensive linemen and tight ends will be the first to run the 40-yard dash starting on Saturday. Quarterbacks, running backs and wide receivers will run the 40 and do on-field drills on Sunday and a few will run through the bench press on Saturday.

It may sound stupid, but the Combine is literally exhausting. While I wasn't the one being interviewed about my favorite color, or whether I would rather have five 100-pound ducks or one 500-pound duck (real question), hurrying from podium to podium and player to player with little to no break all while writing, or trying to write, articles in the short time in between is tiring.

Maybe I'm just extremely out of shape, but I don't think I'm the only one.

Still, this has been one of the most exciting experiences of my life. 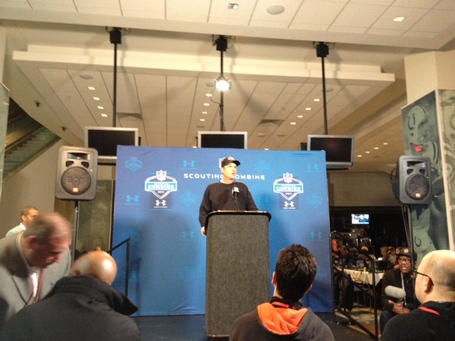