The focus of the 2013 NFL Combine switched from coaches and team personnel to almost exclusively players on Saturday as linebackers and defensive linemen addressed the media.

INDIANAPOLIS -- There were only two more team personnel interviews left by the time the Combine began on Saturday. Jaguars head coach Gus Bradley and Giants general manager Jerry Reese were the only two left after the majority held press conferences on Thursday and Friday. Naturally, the focus shifted from the 32 teams to the hundreds of players cycling through the combine.

Defensive linemen and linebackers addressed the media mostly on Saturday as there were a few straggling running backs, quarterbacks and wide receivers to make their rounds in the media room. Saturday brought two things: on-field workouts and Monti Te'o.

First, the on-field workouts consisted of some special teams players and offensive linemen, who participated in agility drills and the 40-yard dash. I didn't get to go out on the field, but there were several TVs broadcasting the results and players in real time and, besides, my hands were full with press conferences.

The highlight of the day was by far Te'o's time at the podium. His "hoax" story is one of the weirdest stories ever to break on a player for as long as I can remember. There have been players with character concerns before, but not any that had fake girlfriends die from cancer that ended up being a guy online.

The original announcement was that Te'o would address the media at noon. Naturally at 11:45 I made my way over to Podium C and grabbed one of the last seats alongside The Cincinnati Enquirer's Joe Reedy. It wasn't long before we were completely surrounded by hundreds of reporters, all hoping to ask the same questions. People were literally standing on chairs. 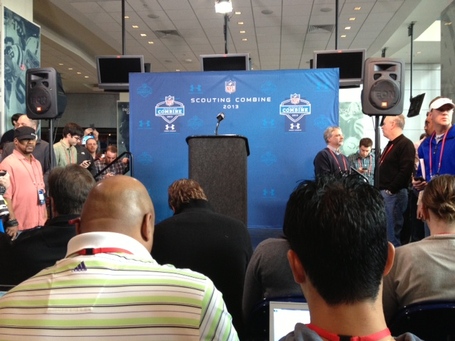 However, as people packed in, it was revealed that Te'o wouldn't make it to the media room until later in the afternoon.

Reporters eventually wondered away, mainly because lunch was being served, and other players were filing into the media room. Eventually, a large mob began to gather around Podium C again as Te'o was on his way.

This time, I didn't get a good seat. 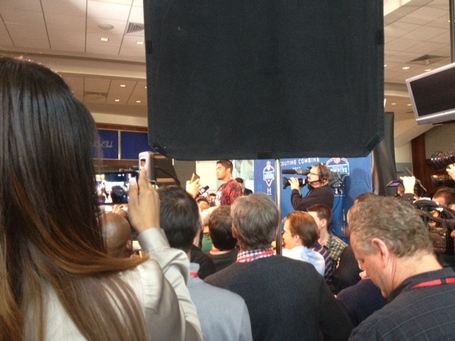 If Te'o fielded 100 questions, 99 of them related to the fake girlfriend hoax and the other one probably had something to do with it too. However, Te'o handled himself like a true professional. It was painfully clear that he had some professional training on how to deal with the media and he graciously asked, repeatedly, that he gets to talk football.

That wasn't going to happen, though. He knows that he'll have to deal with this situation for a long time and, I have to give it to him, he couldn't have handled things any better considering the situation he's in.

Once the Te'o presser came to an end, everybody made their way back to their computers to write the exact same article while more players made their way into the media room. There were several big-name players and some local ones too, like Florida State defensive end Tank Carradine, a Cincinnati native. 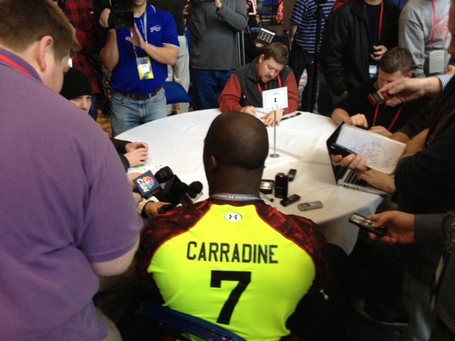 When it comes to the Bengals, though, players that drew my attention as possible early draft picks didn't come until late in the day when Georgia linebacker Alec Ogletree and Kansas State linebacker Arthur Brown made their way to the podium to address the media.

Ogletree was the first to go of the two and had quite a few hard questions to answer, revolving around his DUI charge from two weeks ago. He apologized for what happened and said he was sorry, but also knows that the only way to go is forward.

"I'm a good person at heart," Ogletree said. "Everybody makes mistakes. I feel really bad about the situation. I'm learning from it and I'm moving forward." 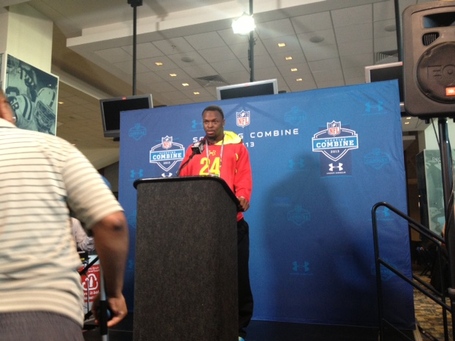 Ogletree did try to sell himself based on his athletic ability, especially his speed, which gives him the ability to help defenses stop some of the newer offenses, like the read-option or the pistol.

Brown came to the podium shortly after Ogletree and seemed to be a complete pro. He was well spoken and sold himself on his versatility and his ability to play at any linebacker position in a 4-3 defense. He discussed his work ethic and his relentlessness as well as what he's learned from his brother, Eagles running back Bryce Brown, and his trip through the combine and draft in 2012. 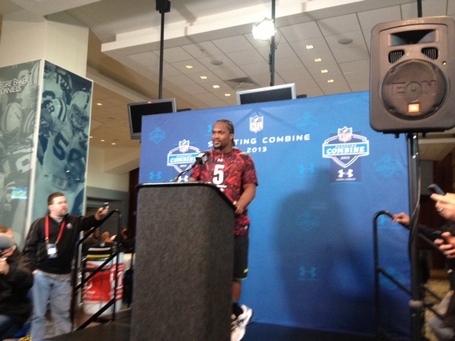 "My goal is to be who I need to be as a linebacker," he said. "Relentless pursuit is a key element to my game, and any defensive player's game. That's something that I definitely strive to always consistently do is pursuing to the ball aggressively downhill. I'm always confident in my ability in open space to get a job done."

On Sunday, cornerbacks and safeties as well as the final defensive linemen and linebackers, will address the media and running backs and quarterbacks will take to the field for workouts, which, in my opinion, is always the most exciting part of the combine, especially when the Bengals are looking for a running back.

Make sure you follow me on Twitter @JGarrisonSBN for live updates of the Combine from Lucas Oil Stadium on Sunday.