Bengals Round Table: Experiences At The 2013 NFL Combine

Jason Garrison has spent the entire weekend in Indianapolis observing and reporting from the NFL Combine. We talk about his experiences up to this point.

Share All sharing options for: Bengals Round Table: Experiences At The 2013 NFL Combine

Our own Jason Garrison has spent the weekend in Indianapolis for the 2013 NFL Combine, rubbing shoulders with the league's top prospects heading into April's NFL draft. With an intense couple of days opening the event, Jason took a few minutes Sunday morning to talk about his experiences and observations.

Josh Kirkendall: How would you define your experience this weekend?
Jason Garrison: Exciting and exhausting. It's awesome to see these guys face to face and have conversations with them and it's even more awesome to realize that they're just people and a lot of them are just as nervous, if not more so than I was. Having the access to coaches and general managers has probably been the highlight for me but getting some one-on-one time with guys that the Bengals could have some interest in is a close second.

I'm staying at a terrible hotel, which won't be a mistake I make if I'm able to come back. Despite the fact that the bed feels like it's made of cinder blocks, I sleep like a baby because I'm so tired by the time I finally get in it.

Josh: Just based on talking with prospects or observing their press conferences, which prospect stood out to you the most?
Jason: Arthur Brown seemed like a true professional. He seems to have a good head on his shoulders and a passion for the game. From my one-on-one time with Giovani Bernard, I was really impressed with him as well because of his apparent willingness to do whatever it takes just to get on the field, whether that means he's a feature back or just a change-of-page guy. When it comes to stature, Eddie Lacy looks like a truck with legs and I'm excited to see his speed, though he won't be running here. Also, as played up as it has been, I couldn't help but be impressed with Te'o's composure. Same goes for Alec Ogletree, who had to answer some tough questions about his DUI charge.

Josh: The T'eo press conference was insane. Television didn't really do it justice, other than the continuous highlights and replays. Some said that there were more media than with Tim Tebow.
Jason: I was sitting next to a guy who has been coming to the combine for years. We were talking and he said the biggest three were Tim Tebow's, Cam Newton's and now Te'o's but he thinks that Te'o's may be bigger than all the other ones. I mean, the "hoax" story that broke this winter was weirder than anything anybody had every been through before so it's not a surprise.
People are still talking about it this morning.

Josh: The timing was good for him though. Save for personal chats with teams, this should be largely behind him. Have you met any prospects and thought to yourself, I'm not sure about that guy if the Bengals draft him?
Jason: Well everybody is trying to be as impressive as ever because they know it's a job interview and they know that the media can spoil their chances at potentially getting millions of dollars. However, just from talking to them, I was more impressed with Brown than Ogletree, though Ogletree looks like more of a physical threat on the field. There have been a player here or there that raised some eyebrows, like when LSU defensive lineman Barkevius Mingo said that he needed to be drafted so he could support his family, and then said he was making $5,000 bets with Sam Montgomery about who would get drafted first, but for the most part, everybody knew what was at stake.

One more player that I forgot to mention who was especially impressive just in conversation was Montee Ball.

Josh: While interviewing players, what was the weirdest question(s) you heard around you?
Jason: It was 100 percent this: "Would you rather have five 100-pound ducks or one 500-pound duck".
Josh: How does someone answer that?
Jason: I don't remember who the player was, but he looked completely confused. He did answer it, though, by saying he would rather have five 100-pound ducks because, "I guess that way I'd have more ducks." Then he said that was the weirdest question he'd ever heard and laughed.

Josh: The Combine started with press conferences with coaches and general managers. What stood out to you?
Jason: A few. Chuck Pagano's presser was really great and he was in good spirits and elevated the mood of the whole room. Of course Marvin Lewis' was great just because we talked about the Bengals. Jim Harbaugh's stood out as being somewhat weird because most of the questions were about his brother and he also went on a tangent about what he's learned from Judge Judy. He also looked really, really pissed off the entire time. Chip Kelly's and Andy Reid's were really great too, though no coaches divulged a lot of information.

Josh: Would you rather have five 100-pound ducks or one 500-pound duck?
Jason: After thinking about it, I think I'd go with one 500-pound duck just because a herd of 100-pound ducks would be harder to manage. I don't really like the taste of duck because it's greasy, but I think I could ride a 500-pound duck, once it was trained of course, kind of like the blue people rode the dragons in Avatar. That would save me quite a bit on gas money. All I would have to do is feed it bread crumbs.

Josh: Everyone knows that 500-pound ducks don't have a bread crumb diet. There's at least a Rally's meal in there somewhere.
Jason: Well Rally's is still cheaper than gas.
Josh: That's just lunch. The spread for dinner is insane. Speaking of which, would a duck eat a Turkey?
Jason: I don't see why not, especially if it was a 500-pound duck. I'm fairly sure it would eat almost anything.
Josh: Just have to wonder if there's some morality conflict there.
Jason: Nah. Duck eating duck would be forced cannibalism, but duck eating turkey is the same as a great white shark eating some lesser fish.
Josh: Yea, but sharks are dicks. Ducks are kind of cute. Even Joey Tribbiani had one as a pet.
Jason: I don't think a 500-pound duck would be cute. I think a 500-pound duck would be f***ing terrifying.
Josh: Like a Zombie duck? 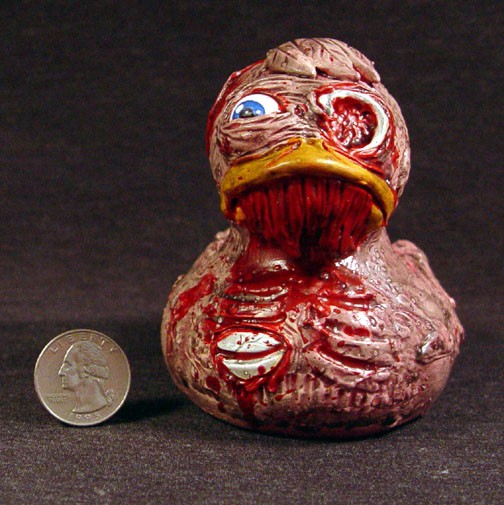 Josh: Makes sense.
Jason: Remember: dinosaurs evolved into birds. We're talking about a smaller Tyrannosaurus Rex with wings instead of stupid little girl arms and a beak without teeth.