Several reports surfaced about quarterback contracts on Monday, but first, let's do a poll. Since we have limited capacity with the promo headlines (what you see on the front page), we can't use lengthy morning tag lines and we'd like to keep it somewhat identifiable so you know that these morning postings are a collection of stories, reviews, recaps or the occasional soapbox rant.

At the end of this posting sits a poll for best morning tag line and if we get a fair amount of votes, then we'll run with it. We've removed Raw Meat, only because, well, we just did. "Josh's Fun-Time Happy Morning Hour" was a strong candidate, but then we ran into our headline limitations.

We also decided to remove anything with morning in it, only because once we reaffirm our existence as trend-setters, it won't be necessary. Anyway, make sure you vote. Moving on.

And that's exactly what it did.

Darrin Simmons loves him, need a threat at returner, and imagine coaches trying to figure out punt coverage with Cribbs and Pacman - Joe Reedy arguing for Cincinnati to sign Joshua Cribbs

Don't worry. Tom Brady and wife won't be resorting to paper plates anytime soon to help his team acquire new talent. According to Albert Breer with the NFL Network, if you combine Brady's old deal with the new one, the contract essentially becomes a five-year deal worth $60 million with every penny of that guaranteed.

+ According to SportsCenter, the top-nine projected cap values of quarterback contracts heading into 2013.

We're not sure where he ranks among the NFL quarterbacks, but we do know that Andy Dalton's $1.4 million cap number is outside the top-40.

+ Speaking of pricey contracts, reports are surfacing that the Oakland Raiders are going to either restructure Carson Palmer's contract and it's not out of the question they end up parting with Palmer all together. Palmer is scheduled to earn $13 million in 2013 and you've already noted his cap number above.

And the Bengals still have Oakland's second round pick. Perhaps draft a running back with that pick and allow Hue Jackson to coach him. Talk about poetry.

+ According to what Jason La Canfora is hearing, the salary cap could be anywhere between $122.5-$123 million. Franchise tag numbers can't be finalized until the salary cap is determined. This matters for the Cincinnati Bengals, who could be using their tag on either defensive end Michael Johnson or offensive tackle Andre Smith.

+ Reports are also surfacing that with Brady signed through 2017, the New England Patriots are putting quarterback Ryan Mallett on the trade market. For those you "throwing this out there", we know that Mike Brown favored Mallett over Andy Dalton, but don't expect a move to be made here. The last thing Dalton needs is someone looking over his shoulder that's in the same uniform. He's having enough issues of that from opponents.

But more reasonably argued, Dalton will be a free agent in two years, roughly the same time Mallett would be. Acquiring Mallett would suggest you're finished with Dalton and the Bengals aren't.

+ For local fans, Joe Reedy with the Cincinnati Enquirer details why Walter Fields with the University of Cincinnati wasn't allowed to workout at the NFL Combine this weekend.

Keith Fields, who is Stewart's foster father, said that Stewart was informed around 2:30 a.m. Monday that he would not be allowed to take part in Monday's workouts for defensive linemen and that he was red flagged medically. Stewart was born without the posterior arch of his C1 vertebra, which was discovered after he suffered a neck injury in UC's Oct. 13 win against Fordham. Stewart though did take part in interviews with teams.

+ The Boston Globe released a study over the weekend that explored just how much the charity organizations created by professional athletes actually give back. For example:

Some athletes are almost as good at bringing attention — and money — to important causes as they are at their sports. A nonprofit founded by San Francisco 49ers quarterback Alex Smith, for instance, raised $839,244 between 2008 and 2010 and spent 91 percent of the funds on scholarships and grants to help foster teens attend college and transition to adulthood.

Other organizations aren't so charitable or transparent at least:

A foundation started by New York Yankees third baseman Alex Rodriguez gave only 1 percent of proceeds to charity during its first year of operation in 2006, then stopped submitting mandatory financial reports to the IRS and was stripped of its tax-exempt status. Yet the group’s website still tells visitors the A-Rod Family Foundation is a nonprofit organization.

+ Oakland Raiders defensive tackle Desmond Bryant was arrested in Miami Sunday after allegedly going to a neighbor's house, wasted out of his god-loving face and caused a ruckus.

Now he has the mug shot of mug shots. Just. Wow. 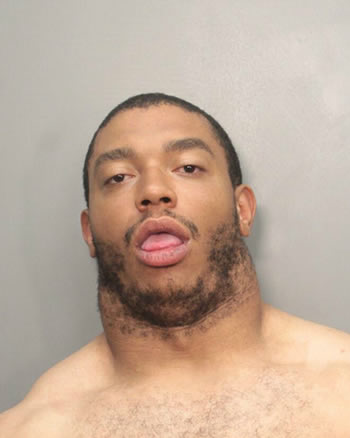