We take a look at Rey Maualuga's history playing SAM compared to MIKE and how Andre Smith's agent could make the difference.

BBB stands for Bengals Bits O' Bacon until you guys finalize the vote.

+ It's understandable that fans would feel a measure of hesitancy with Rey Maualuga. Because in these bones, writing words that you're reading, it feels like Maualuga is returning. His role, a little uncertain. Defensive coordinator Mike Zimmer suggested moving Maualuga back to SAM if Cincinnati re-signs him. Bengals head coach Marvin Lewis told Around The League's Gregg Rosenthal that "he's one of the guys you got to get back in the fold." Even if you're attaching his comments as a diplomatic response, head coaches avoid certainties like that during uncertain times. Even the riddler Marvin Lewis.

"He's one of the guys you got to get back in the fold. -Marvin Lewis on Rey Maualuga

After two solid years as the team's strong-side linebacker, the transition inside left resulted in a failed experiment, attacking incorrect lanes, over-pursuing, terrible coverage, missed tackles but more importantly, carrying the failures along in his mind when he should forget about them and move on. But let's compare his time at SAM and MIKE.

Grade-wise Maualuga was superior at SAM. Production-wise, he appeared more effective at middle linebacker, however his missed tackles exponentially increased and his snaps per tackle was actually better (7.97) from '09-10 than at middle linebacker (8.84).

+ Unfortunately after the 2010 season, flowing with a heavy demand from fans to move Maualuga for the departing Dhani Jones, the growing (and suspenseful) feeling is that Maualuga will return where played originally entering the NFL, which leaves the question: Who plays middle linebacker? 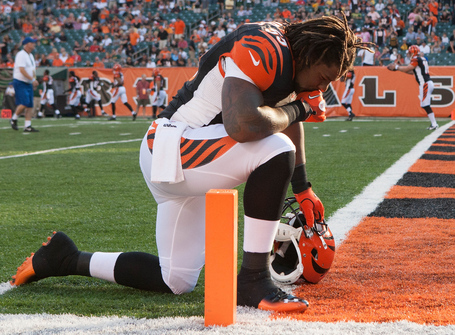 Of course, d'uh. Not like an outside linebacker moving inside is a can't-miss proposition.

Here's my thought. Bring Maualuga back at SAM, look at free agency and the 2013 NFL draft for a replacement at middle linebacker while keeping Vontaze Burfict where he played in 2012. My thinking: Did you see what Burfict did where he played last year? Why mess with that formula for what amounts to a technicality based on the position a player plays. Burfict still plays most of the defensive snaps, including as a cover linebacker during five-back formations, who scored a 1.9 grade in coverage according to Pro Football Focus.

+ Question from @QuizGuy66 on Twitter: Does Andre still have that same knucklehead agent he did during "Hard Knocks"?

This is an important consideration because a significant component getting a deal done includes the relationship between the agent and the organization -- this isn't just a Bengals thing either, it's true with mostly every agent and franchise.

Smith has gone through agents like a buffet since entering the NFL draft. First he hired Alvin Keels, then fired him after the debacle at the National Scouting Combine in 2009. He hired Rick Smith, who helped improve his stock. Yet once Smith was drafted by the Bengals, he fired Smith and re-hired Keels.

On October 23, 2012, Smith terminated his contract with Alvin Keels, entering the market for a new agent.

+ Reminder to vote for the new morning tag-line here.

+ According to reports New York Jets general manager John Idzik conducted trade talks with multiple teams regarding cornerback Darrelle Revis at the NFL Combine, who is entering the final year of his existing deal. The New York Daily News reports that Idzik is "flying solo" on the venture with the Jets coaching staff completely out of the loop.

"We will always field calls and always have internal discussions about how we can improve our team day-to-day, position-by-position," he said. "That’s an ongoing process."

Revis, who speculation suggests could ask for $16 million per season on his next deal (no matter who it's with), is coming off ACL surgery, entering year four of a $46 million contract that he signed in 2009 and is scheduled to make only $6 million this season.