The Chance He Took

Carson Palmer quit on the Bengals and ran the risk of a rocky football career outside of Cincinnati. Now that career is being challenged by his new employer who has raised questions about the veteran's value.

Share All sharing options for: The Chance He Took

Even though Carson Palmer is now thousands of miles West, he remains on the playbill of the Marvin Era theater and will therefore continue to be chronicled within these pages. He was a major player in the early going of the saga and was largely responsible for making football fun again in this town, but he was dealt a heavy hand of great expectation which, through cruel twists of fate mixed with his physical limitations, he was never able to live up to. Here in Cincinnati he had a contract that was as sure as the setting sun and an owner who drooled over him, positively mystified by his face-of-the-franchise charm. Yet as generic and routine as Palmer portrayed himself to the outside world, he apparently also had a brooding side that unexpectedly lashed out when he announced his immediate resignation as quarterback of the Cincinnati Bengals.

That must have been an emotionally challenging moment for Carson. Something frustrated him enough for him to leap into that wildly unpredictable void of a future rather than to carry on with his safe and blasé life with the Bengals. Whether it was the lackluster season his team turned in after the 2010 campaign, the fans, the city, his wife or all of it, has yet to be shared by the man himself, but it had seemingly built up over time before erupting into one giant and rash decision.

During the week Cincinnati hosted the Oakland Raiders last season, Carson Palmer was asked by the Cincinnati media about his reasons for leaving. Being an otherwise enigmatic character, the former 2003 first overall pick shrugged off the media's attempts for answers. “Just a culmination of things. Some things that I had learned that ownership ... just some things that built up over time, and it was just time for a change.”

If not for consecutive postseason appearances, the sting of his betrayal could have been more severe. However two draft picks inside the first two rounds over a two-year period, including this year's No. 37 overall pick, the Bengals clearly won the biggest headline trade in recent franchise history.

Had Carson not gone public with his frustrations, I think he would still be the Bengals quarterback today. Mike Brown wasn't going to cut him; he was going to pay him. He may not have resigned him once he became a free agent, but he wouldn't cut him. Palmer would have had A.J. Green to play with and be coached by Jay Gruden. Life wouldn't have been so bad here after all in retrospect.

I think he is happy in Oakland, though. He is a California dude, been there most of his life. He probably feels more comfortable operating in the Pacific Standard Time zone. Probably eats way better tacos on a regular basis. His daily life has likely become more comfortable for him.

The football side though isn't as sure of a thing outside the cozy and forgiving confides of Paul Brown Stadium. Here he could have coasted on decent numbers but lower win totals for a good five or six more years before some mutual departing decisions would be necessary, but already in Oakland his value is now being scrutinized. 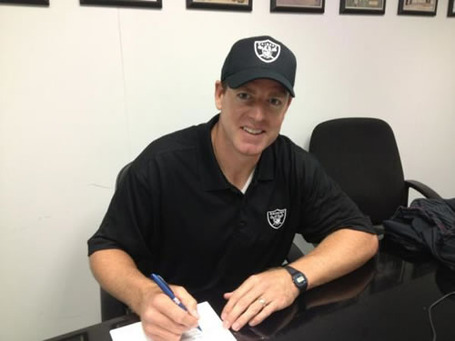 When the Raiders traded for him, they signed him to a funky contract that paid him only $2.5m in the first year but double-digit numbers in the next three years. That means he makes $13m in 2013 with a cap number north of $15 million which forces the front office to fix their eyes a bit more firmly on the young and athletic backup quarterback, Terrelle Pryor, as the team's future at the position. The Raiders gave him a start in the season's finale and the kid didn't look too bad, a clear indicator what the thinking might be this offseason.

Dolphins quarterback Matt Moore just signed a two-year deal worth $8m and was considered the best QB available in this year's free-agent class had he hit the open market. Moore is a backup to Ryan Tannehill, and is likely one of the better-paid backups in the league.

This forces the question: has Palmer reached backup status at this point of his career?

I still think he is a pretty decent player. His numbers were good last year (4,018 yrds, 22 tds/14 int, 85.3 rate), he's been healthy with Oakland, and he is well-trained for his position. Yes, his turnovers are a problem. Yes, he still throws too high too often, and yes, his mobility gets worse every year, but his arm is still strong and his mind still sharp and in this league, that alone will find you a job.

But what kind of job?

If Oakland were smart, they wouldn't low-ball Palmer out of town. Sure, Pryor is an interesting player whose skill set fits in nicely into the perceivable future of the quarterback position, but you can hardly call the guy proven. Also, can Pryor take a season of hits? If that answer is anything other than a resounding yes!, than it would be prudent to have somebody around who can. Pryor might dazzle from time to time, and might even turn out to be a great player himself, but to go "all in" on the young man seems hasty.

I'm sure Palmer would rather not be a backup quarterback, and I think he would command a bit more coin elsewhere (Arizona?), but I think he might sign a contract around Moore's number and risk riding pine in Oakland because of how comfortable life is in California for him. It's not all that unlikely that the offense and the game itself is still too large for Pryor to lead his team to the playoffs any time soon and that Palmer could be reinstalled fairly early to salvage the season. Though, in fairness, I have read how diligently Pryor has prepared for this season and is working his way into serious contention in regards to the starting job. I would think Palmer would also be of tremendous value for Pryor as a person to learn from, and while I don't know exactly what kind of guy Carson is, I would also think he would help Pryor in this way. 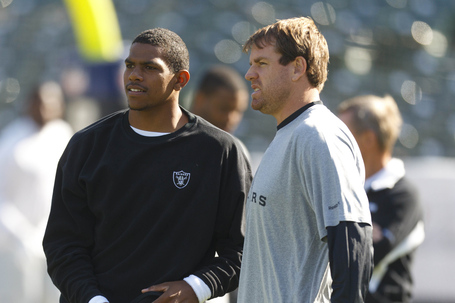 Like many of you, I relished seeing him sacked numerous times by the Bengals when he returned to town last November, and felt vindicated after they kicked Oakland's ass all the way back to the West Coast, but I have made my peace with the man and would like to see him succeed again. The parallels between him and Drew Bledsoe continue to be spot on, and if that comparison carries on this way, Palmer will bounce around to a few different teams before hanging it up, but I would rather not see it that way. I would rather see Palmer stay a Raider and lead them back to respectability. I would like to see him win a playoff game and be remembered as a good quarterback in his later years. And someday, I would like him to tell us why he left Cincinnati they way he did.

No matter how it ends up, it will be detailed here. He is a polarizing figure in the annals of Bengal lore and invokes feelings of both gratitude for his many years of service here and betrayal for his abrupt and heartless departure. He is so predictable, so hum-drum as he heavily tows the company line, yet at the same time was so mysterious and surprising with his "retirement" that no one can know for sure what he will decide. For a pretty regular guy, he brings about a thick cloud of drama wherever he plays football. I'm not sure he wants it this way, but such is his life. The unpredictably mundane.