The Cincinnati Bengals signed Mike Nugent to a two-year deal on Sunday and it has us wondering if we're just complaining because it's in our nature.

Share All sharing options for: Bengals Bacon: Filing Under Justified Complaining To Complain

We've complained about every free agent signing and draft pick since the first rains cooled a violent planet Earth billions of years ago. We've complained about Marvin Lewis (a lot), Jay Gruden, every quarterback since Boomer Esiason, most assistant coaches, virtually every new acquisitions and anything about those that didn't return. We complain about Jermaine Gresham, a two-time Pro Bowler with the counter-argument that he was just an alternate that made the all-star game thanks to injuries and Super Bowls. Some of us will even complain about Carlos Dunlap's injury history, despite sporting a better ratio of quarterback pressures to rushes than that of Geno Atkins. We don't complain about Geno Atkins though. Not yet at least.

But that's what we do. We complain no different than active political observers or people reacting to their favorite shows. Even The Walking Dead has generated more than enough complaints about stale storylines that bookend exciting season premieres and finales with slow burning moments in the middle. It's a human thing. During a commercial of the Bulls and Lakers on Sunday afternoon was a promo for the Evil Dead remake. My first instinct: "Well they're just going to butcher the original because that's what remakes and reboots do these days. #NoAshNotInterested." Yes, I speak in hash tags: "Honey, take out the trash." "#WhenIDecideToPutPantsOn" 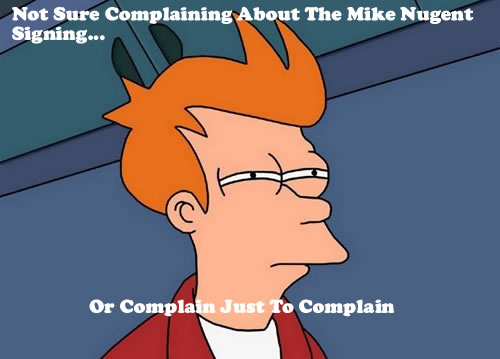 It's understandable that some are resisting Cincinnati's choice of Mike Nugent over Josh Brown after the team announced Nugent's two-year deal on Sunday. Brown, who converted 11 of 12 field goals including a game-winner against the Steelers that ultimately clinched a postseason berth, was signed a day after Nugent hurt his calf during practice in early December. Subsequently he won over everyone's heart, including Kate Austin whose only role was to implement a stale love triangle that writers blindlessly feel "spices things up" as the "go to" story arc. But we're not complaining.

Over the last three seasons, Nugent and Brown were comparable in their production with Nugent converting 67 of 80 field goals (83.8 percent) while Brown nailed 65 of 79 attempts (82.3 percent). Cincinnati essentially ignored Mike Nugent's durability issues, having missed 12 games since joining the Bengals in 2010 with only one full season in the past five years. Brown, on the other hand, returns to where the Bengals found him. The street... for now.

That being said none of Nugent's misses in 2012 directly resulted in any of Cincinnati's losses. A 41-yard miss with 3:05 remaining against the Miami Dolphins is the closest, which would have reduced Cincinnati's four-point deficit to one. Instead Andy Dalton completed his second interception two minutes later and the Dolphins won 17-13. Nugent also failed to convert a 46-yarder against the Denver Broncos in the closing seconds of the first half, but the miss wasn't a direct influence in a game that featured Cincinnati's fourth quarter collapse, transforming a three-point lead into an 11-point loss. Nugent's remaining two misses in 2012 came during wins.

Brown was damn-near heroic in December last year, even winning AFC Special Teams Player of the Month. People feeling the need to complain about the Bengals choosing Nugent over Brown won't get opposition from us. Debating the topic in our free agency round-up, our conclusion went something like this: If the Bengals choose Brown, fine. If they choose Nugent, fine. One or the other works.

"There's no doubt in my mind that Josh Brown should be kicking in the league this year. He's one of the 32 best kickers out there,"Simmons told Bengals.com on Sunday. "I would have been happy with either one of them. What Josh did when he came in here and what he did for us, he hit us right where we needed it."

However we don't think this boiled down to a money issue. Six months ago Josh Brown was a street free agent, without teams calling his elite services. He's not going to be picky, nor demand anything that removes himself from probable negotiations -- not during a time when rookie kickers are making immediate impacts. In the meantime the Bengals used the franchise tag on Nugent, so it's not like they're playing a game of nickel, dime, quarter with kickers.

+ Football Sunday may be in hibernation mode now, but Sundays still hold a tremendous enough of a sports foundation to keep us entertained. And if you love sports, Sunday was choreographed just for you. My Sunday evening recap.

6:01 PM: Los Angeles Lakers easily beat the Chicago Bulls 90-81 for sole possession of the No. 8 seed. [Editor's Note: Deleted 11,000-word complaint how the San Antonio Spurs, with the second-best record in the NBA, are never featured during Sunday afternoon games on ABC]

6:03 PM: Watched the final 17 laps of the Kobalt 400 at Las Vegas Motor Speedway, with Matt Kenseth holding off a superior Kasey Kahne, winning by only a tenth of a second on his 41st birthday. During most of those final laps (aka, when we prefer tuning into a NASCAR race), Kahne was within two car lengths of Kenseth.

6:10 PM: Picked up the Indiana Hoosiers at Michigan with the Wolverines holding onto a two-point led with the final minute remaining. Glenn Robinson III made one of two free throws, giving Michigan a three-point advantage before Cody Zeller converted two frees to reduce Indiana's deficit back to one. Trey Burke missed the first free throw, which Zeller converted into another field goal and a one-point lead with 0:14 seconds remaining in the game. Burke missed the lay up and Jordan Morgan barely missed the tip, leaving the basketball to slowly roll off the rim, rebounded by Indiana to win the Big Ten Title outright.

6:18 PM: Tiger Wood leading the Cadillac Championship by four strokes through 15 holes. We'll come back to that.

6:19 PM: The United States is losing 3-2 to Canada in the final game of the first round of the World Baseball Classic. Top of the eighth, one out with Willie Bloomquist and David Wright on first and second. (the not Bengals) Adam Jones (guy) cracks the baseball in the gap of left-center field, driving in both runners and giving the States a 4-3 lead. Shane Victorino singled in Jones one out later, giving the good guys an insurance run, which helped.

6:30 PM: Tiger boogied 16, but holds onto a three-stroke lead with two holes to play.

6:42 PM: Canada's Chris Robinson drives a single to right field, loading the bases with Cincinnati's own Joey Votto on third.

6:47 PM: Brandon Phillips makes a great play on an Adam Loewen grounder, limiting the Canadians to a Votto run but holding onto a 5-4 lead. The inning ended eight minutes later with no changes.

7:00 PM: Phillips opens the ninth with a stand-up double, later scoring an insurance run on a single by Jonathan Lucroy.

7:15 PM: The States opened the flood gates with an Eric Hosmer three-run double, extending our lead to 9-4.

+ During the debate between kickers, Mexal offers this comment to this thankful bacon chef (who now doesn't have to piece this together):

Where does this come from that Josh Brown is better at kickoffs than Nugent? I see it all the time but I don’t see any stats that actually back up that assertion.

+ Details for Kevin Huber's contract has yet to be broken down, but the basics right now is that his five-year deal is worth $14 million.