Three Bengals were named in the top 10 in their respective positions by Bob McGinn.

Smith was ranked as the fourth best free agent offensive tackle behind Jermon Bushrod, Jake Long and Sebastian Vollmer. Both Bollmer and Smith are unsigned as of Tuesday while both Bushrod and Long signed with new teams.

Here's how the offensive tackles break down: 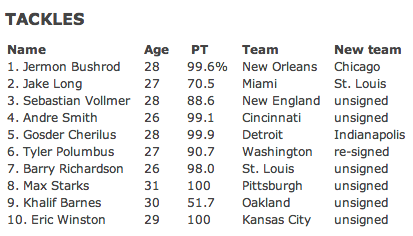 Gradkowski was ranked as the league's seventh best free agent quarterback. As Andy Dalton's backup over the last two seasons, Gradkowski hasn't gotten much playing time. However, when he was on the field, he played well. His highlight was leading the Bengals to a win over the Browns in 2011. He was signed by the Pittsburgh Steelers as Ben Roethlisberger's backup. 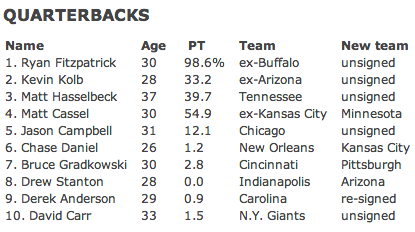 Maualuga was ranked as the third best inside linebacker to hit free agency behind Dannell Ellerbe and Brian Urlacher and ahead of Dan Connor. Maualuga was re-signed by the Bengals on a two-year deal and on Tuesday Marvin Lewis stated that he was planning on keeping Maualuga at MIKE and Vontaze Burfict at SAM despite the fact that Maualuga struggled at inside linebacker over the last two seasons. 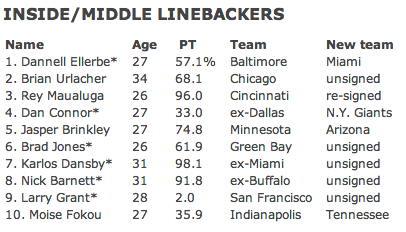 The Bengals have made it clear that they would like to re-sign Andre Smith and they have been working towards bringing him back to Cincinnati for the 2013 season and beyond. They have also expressed their desire to re-sign Adam Jones and Terence Newman. A new round of free agency is expected to begin once coaches and general managers return from league meetings. The Bengals are typically more active in the second week of free agency and will likely make a move in the coming week.

Rumors Regarding The Cincinnati Bengals And Free Agents