The Dontay Moch Question: Does He Have A Chance In 2013

The Cincinnati Bengals used a third-round pick on Dontay Moch during the 2011 NFL draft.

Share All sharing options for: The Dontay Moch Question: Does He Have A Chance In 2013

For three dominating seasons, Dontay Moch shattered conference records, generating 63 tackles-for-loss and falling one sack shy (30) of the WAC record for most sacks in a career. As a senior, helping his school finish 13-1 with an AP ranking of 11, Moch posted 8.5 quarterback sacks and 22 tackles-for-loss and the year before that, he won the WAC Defensive Player of the Year.

The Cincinnati Bengals selected him in the third round of the 2011 NFL draft, just after A.J. Green and Andy Dalton in the first and second rounds respectively.

Aaron Maybin To Compete At SAM 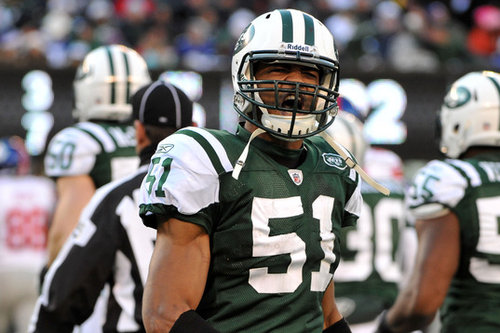 A gameday inactive throughout the entirety of his rookie season with a foot injury that he suffered during the preseason, migraines and a four-game suspension in 2012 (performance enhancing substances) have kept Moch off the field in 33 of 34 games (including the postseason). Moch made his debut and lone participation against the Cleveland Browns on October 14, 2012, contributing with five defensive snaps, of which four were pass rushes (no pressures). He was later placed on Injured Reserve on November 2 when his migraines returned.

Even before the migraines resurfaced, defensive coordinator Mike Zimmer was becoming frustrated with Moch.

"He's been here for a year and he's making mistakes that he shouldn't be making," DC Mike Zimmer said. "He's sat in the meetings and heard stuff but that's not the best way for him to learn. He has to get out there and do it. He's behind schedule that way."

Strong-side linebacker, where Moch has made his home on the depth chart, will feature a competition battle between unprovens like Brandon Joiner or former NFL-busts like Aaron Maybin. Mean to tell me that he doesn't have a chance? Rey Maualuga is believed to be moving to SAM if he returns as well, which puts the damper on things. Defensive end is an interesting theory as well, especially with Robert Geathers and Wallace Gilberry entering free agency.

Either way Moch has to get a handle on his migraines or none of that matters.