BB: Grabbing a Running Back In The SB Nation Mock Draft

The bacon sizzles with visions of a running back during our final selection for the 2013 SB Nation Mock Draft.

Share All sharing options for: BB: Grabbing a Running Back In The SB Nation Mock Draft

At least our participation with it. On Wednesday our final selection in the SB Nation writers mock draft has been submitted and published.

During the first two selections, we applied defensive upgrades by selecting Texas safety Kenny Vaccaro (No. 21) and defensive end Alex Okafor (No. 37). Our thought process was this: Safety is a significant need and Okafor offers a short and long-term solution. [Note: we made the selection without once suggesting that James Harrison would be in the free agency mix].

Should the team fail to sign Carlos Dunlap and Michael Johnson to long-term deals, they have a ready-made in-house replacement ready to install. Additionally Okafor provides a viable solution for an inside pass rush beside Geno Atkins during nickel situations this year, absorbing the defense during his rookie year.

That leaves one final selection in the two-round mock draft. With the No. 53 pick of the 2013 SB Nation writers mock draft, we selected North Carolina running back Giovani Bernard. Jason Garrison filed the explanation.

"The Bengals are in need of a running back to complement BenJarvus Green-Ellis, who excelled as a short-yardage back and in the red zone, but isn’t a home run threat," writes Garrison. "The addition of Bernard, who can serve as a change of pace back and on special teams, will boost the team’s running game which will, in turn, help Andy Dalton and the passing game. Bernard could also potentially take the reins as the team’s primary back once Green-Ellis hits free agency following the 2014 season. A solid running game could help the Bengals reach the playoffs for the third season in a row."

+ The Cincinnati Bengals began voluntary workouts during Monday, with newly minted tee-shirts that read: Get Better Together. These shirts that Cincinnati hands out every year are typically three-worded phrases to help motivate and inspire players, a practice generally applied to most teams in the NFL, college and even high school. It was "Destination: New Orleans" during training camp last year. Following voluntary workouts, the Bengals will conduct a rookie minicamp during the weekend of May 10, and OTAs during the following week. 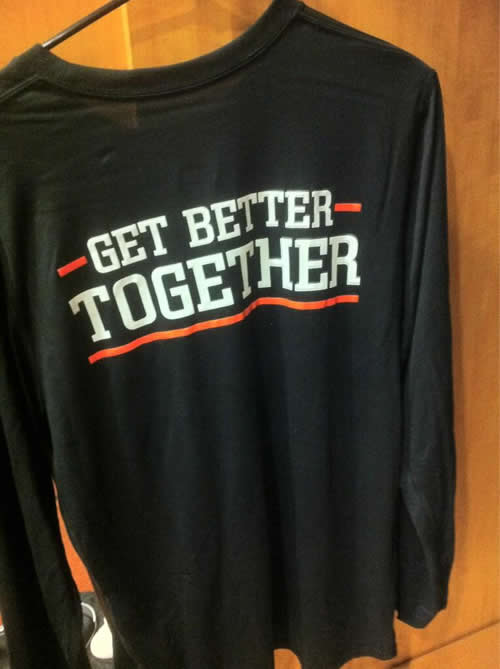 + Wide receiver Mohamed Sanu called himself 100 percent after surgery in December repair a stress fracture in his foot that forced him onto the season-ending Injured Reserve list. Offensive guard Travelle Wharton is also expected to be 100 percent by training camp.

Our top five position battles as of this posting.

Offensive Guard: Clint Boling was a nice surprise last season (especially as a run blocker) after Wharton suffered a season-ending injury during the first preseason game last year. Wharton on the other hand is an excellent run blocker that's prone to struggling in pass protection. Two men enter, one man leaves (that wasn't too corny, was it?)

Backup Quarterback: Boils down to Josh Johnson (free agent signing), John Skelton (waiver claim) and Zac Robinson (career practice squatter squader). We have no dog in this fight, other than to say, if Andy Dalton sustains a significant injury, then you better hope for the best defensive performance ever witnessed in Cincinnati.

No. 2 Wide Receiver: Personally comfortable with seeing what Mohamed Sanu does as an every down wide receiver, there will be a camp battle between Sanu and Marvin Jones. The loser may be listed below Andrew Hawkins, who may be the team's early slot receiver favorite. But even that might be a battle within itself.

Starting Center: Bengals head coach Marvin Lewis admitted during the NFL combine that Trevor Robinson and Kyle Cook will wage battle for the starting center position. In fairness, he said that about everyone -- save for the golden boy quarterback.

Backup cornerback: We're expected to believe that Leon Hall and Terence Newman will start with Adam Jones playing a significant number of snaps in nickel formation. Though we haven't seen anything from Dre Kirkpatrick to warrant any suspicions to upset those perceived plans, we're comfortable in saying that Kirkpatrick fully intends to finally make his presence known.

+ The FBI and IRS reportedly "locked down" the headquarters of Pilot Flying J, a truck stop business in Tennessee. Cleveland Browns owner Jimmy Haslam is also the CEO, taking over for his father in February with his brother, Tennessee Governor Bill Haslam.

Per the Associated Press Monday night:

FBI spokesman Marshall Stone told The Associated Press that the move was part of an ongoing investigation, but he would not provide additional details. FBI and IRS agents were expected to remain in the building into the evening, he said.

The FBI was keeping all traffic away from the company property, and Knoxville police patrol cars and officers could be seen outside the headquarters.

"Any details that would be released to the public would not be available for some time," Stone said.

The Cleveland Browns have refused comment at this time.