The Cincinnati Bengals have selected Notre Dame tight end Tyler Eifert with the No. 21 pick of the 2013 NFL draft.

Share All sharing options for: 2013 NFL Draft: With The No. 21 Pick The Cincinnati Bengals Select Notre Dame TE Tyler Eifert

At one point during the 2013 NFL draft, it appeared that the Cincinnati Bengals would have an opportunity to select a safety that they wanted. After the New Orleans Saints selected Texas safety Kenny Vaccaro at No. 15, the Dallas Cowboys swapped first round selections with the San Francisco 49ers, who snagged LSU safety Eric Reid. This left the door open for the Cincinnati Bengals to select FIU safety Jonathan Cyprien, who underwent a private workout with Mike Zimmer late during the predraft process.

Our own Joe Goodberry writes:

"Eifert is like a bigger, slower WR. He can hold his ground as a blocker, but he isnt going to be your lead guy. The effort is there though. He has Great hands and is an instant red zone threat with his size and ball skills. His ball-tracking and hand/feet coordination are RARE for a TE. Safe pick."

Some thought an average tight end class would push the tall, athletic Eifert into the 2012 draft as a redshirt sophomore. After all, it was the decision of Kyle Rudolphs to leave a season early for the 2011 draft (he was picked in the second round by the Vikings) opened the door for Eifert to become a star. And while a freshman at quarterback hurt his production as a junior, he still led the team in receiving in 2012 with a team-best 50 catches for 685 yards and four touchdowns, winning the Mackey Award (Nations top tight end). Eifert decided to skip his final season of eligibility and enter the 2013 NFL Draft.

The son of former Purdue basketball player Greg Eifert led all FBS tight ends with 63 grabs for 803 yards in 2011, and his five touchdowns made him a nice red zone complement to first-round receiver Michael Floyd. Even with Rudolph starting ahead of him in 2010, Eifert made enough of an impact (27 catches, 352 yards, two touchdowns) as a redshirt freshman to earn the teams Offensive Newcomer of the Year award. 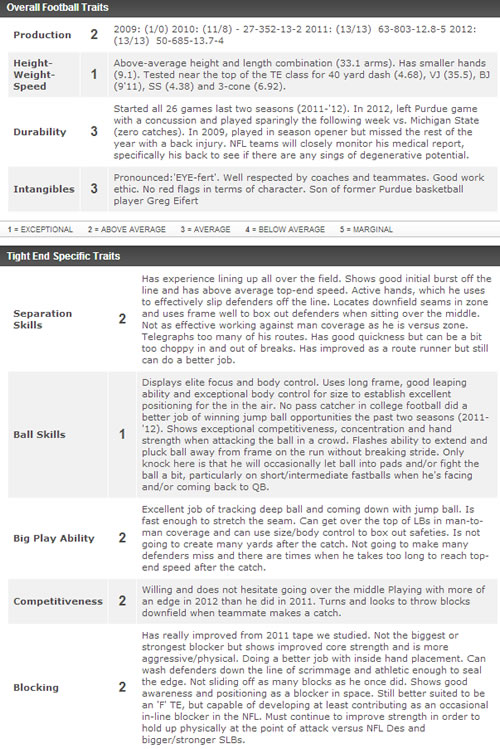