2013 NFL Draft: With The No. 37 Pick The Cincinnati Bengals Select RB Giovani Bernard

The Cincinnati Bengals have taken their running back, selecting Giovani Bernard with their No. 37 pick in the 2013 NFL draft.

Share All sharing options for: 2013 NFL Draft: With The No. 37 Pick The Cincinnati Bengals Select RB Giovani Bernard

The Cincinnati Bengals addressed one of their pre-draft needs by selecting North Carolina running back Giovani Bernard No. 37 overall.

"Gio Bernard is blessed with good speed, agility and acceleration to go with an ideal power/balance ratio", writes resident draft expert Joe Goodberry. "His best attribute is everything that makes up the Pre-LOS ability. Think of Arian Foster and his ability to see the hole being created on the backside, yet he strings along the linebacker, presses the hole then violently cuts back into the open field. He's the best in this class when it comes to that. He will not be dependent on a good offensive line. He's also a great in the passing game; probably the best blocking/receiving combo in the draft. Will also help as a return man. He's had average success with ball security once every 85 touches.

"Gio's biggest knock is his health/durability. While he's only combined for about 550 touches, Bernard missed all of 2010 with a knee injury. He then missed a handful of games in 2012 with a knee issue. After passing medical checks, I'm not sure I see a major flaw in his game. He doesn't break as many tackles as you'd like, but he avoids tackle attempts." 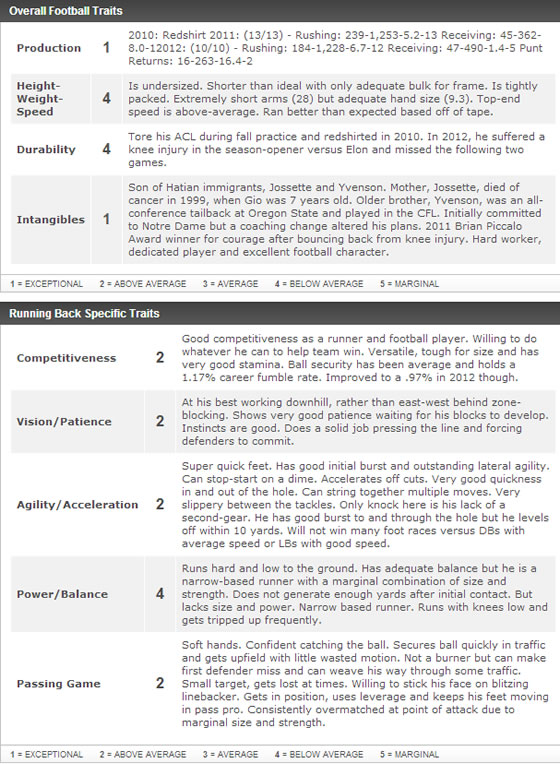