Share All sharing options for: 2013 NFL Draft: With The No. 84 Pick The Cincinnati Bengals Select Georgia S Shawn Williams

"Williams is thickly built with a strong upper body," writes resident draft expert Joe Goodberry. "He's comfortable against the run and should be an In-the-box safety at the next level. He's an average athlete and a risk-taker in coverage. That combination spells disaster in the NFL.

"He doesn't have the physical ability to stick with offensive players in man coverage and he doesn't have the recoverability when he makes a mistake in zone. Williams seems to have tunnel vision; unless he's looking directly at the intended receiver, Williams can easily get lost. I think he's a backup in the NFL. Smart player."

Lewis: "Williams has great physical tools and been a great leader on that team at Georgia. He can compete for an opportunity to play."

Carrier: "He played in an NFL Pro Style defense. They give you a lot of different looks. Not afraid to stick his face in the fire."

Georgia coaches give out a "True Grit" award after spring practice for an offensive and defensive player who stands out for his toughness and pure determination on the field. Despite the large number of NFL-caliber players on the Bulldogs’ defense, Williams has picked up the award each of the past two years. That attitude and voraciousness has shown itself on Saturdays, as opposing receivers and running backs will tell you as they get iced down after the game.

The former Georgia high school all-state pick put his hard-hitting style to work primarily on special teams during his first two seasons in Athens. Williams was named one of the team’s top newcomers after his true freshman year, finishing strong by making three of his season total of five tackles against Texas A&M in the Bulldogs’ Independence Bowl win.

In 2010, he was one of the team’s Most Improved Players on special teams but also started three contests (34 tackles on the year). When a spot in the starting lineup opened up his junior year, all he did was lead the team in tackles (72, five for loss), intercept four passes (including one in the Capital One Bowl loss to Michigan State), and break up six others. As a senior, Williams made headlines for calling out his defensive teammates as "too soft." That description certainly doesn't fit Williams, who racked up 98 tackles (5.5 for loss), with four passes defended. 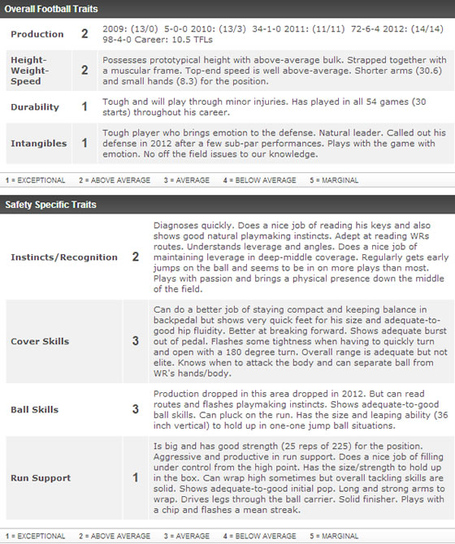