The Cincinnati Bengals have completed their first four selections of the 2013 NFL draft. We review the team's selections in round two and three.

Heading into second and third rounds of the 2013 NFL draft, the Cincinnati Bengals clearly identified a handful of needs, from running back, defensive end to safety. On Friday the Bengals addressed all three positions, though through an unexpected route.

Giovani Bernard was announced as the team's early second-round selection at No. 37 overall, the first of five running backs drafted in the second round. With the departure of Brian Leonard to Tampa Bay and a steep decline with Bernard Scott (who is returning with a one-year deal, though not locked into a roster spot), Cincinnati desperately needed to rebuild the backfield. Hell, they've needed to rebuild the backfield since 2010.

Second And Third Round Draft Stories

The Bengals coaching staff felt that they've added their play-maker, who could replicate a much needed role as a scoring machine... from anywhere on the field. BenJarvus Green-Ellis will join Bernard, idealistically developing into an impressive one-two combination; Green-Ellis pounding the tough yards and Bernard looking for the big-plays. A very promising marriage.

"I'd like to see him improve his pass protection a little bit," NFL Network's Mike Mayock reacts. "Dalton needs to take another step if this team is going to get over the hump. They gave (Dalton) a tight end last night, and now they've given him a quick-footed running back."

Mike Zimmer found a development project with SMU defensive end Margus Hunt at No. 53, whose athleticism inspires hopeful translation in the NFL. A late bloomer, Hunt is ideally positioned as a contingency with upcoming negotiations with Michael Johnson and Carlos Dunlap, each entering a contract year on their respective contracts. Obviously Hunt doesn't project as a starter and may not participate with a significant number of snaps during his rookie season. Yet. An obvious luxury pick, the Bengals find themselves with a quality prospect that won't provide a defined story of instant gratification. That's what happens when you have a talented roster like what Cincinnati has. Bookmark this page.

In the meantime, most of the top safety prospects were removed from the board and the Bengals effort to grab one felt nonexistent. Maybe it was because of their best player available philosophy, unconvinced of their value during the selection. The Bengals waited until the third round (their fourth selection), to select Georgia safety Shawn Williams. 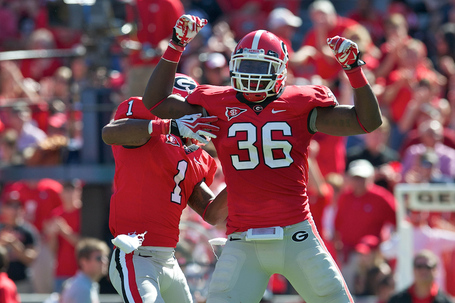 Though the first two picks in tight end Tyler Eifert and Bernard were widely praised, there were some scratching their heads with Williams, especially with teammate Bacarri Rambo remaining on the board. Williams, a three-year letterman at Georgia, played 54 games and generated 209 tackles, 10.5 tackles for loss with 15 pass deflections, four interceptions, two forced fumbles and two recoveries. As a senior Williams started 14 games and generated 98 tackles, 5.5 tackles for loss, a quarterback sack, eight passes broken up and a forced fumble. He's strong against the run, questionable against the pass. Little was improved against constant weaknesses in coverages against tight ends and running backs.

Ultimately Cincinnati picked the players that they wanted; fan reaction be damned. By re-signing most of their own during free agency, many of whom participated during Cincinnati's back-to-back postseason runs, the Bengals enjoyed a luxury to grab players that they felt fit within their system. Whether or not these players lead to productive success stories, it's impossible to diagnose right now. That's why most fans are advised to wait three years. I guess that's why they play the games.