While at the 2013 NFL Combine I was able to spend a little time with both of the Bengals' second-round picks.

Share All sharing options for: February Impressions Of Giovani Bernard And Margus Hunt

Some would call it ironic that the two players I was able to get a little time with at the 2013 NFL Combine ended up being the Bengals' two second round picks. Josh would call it fate or destiny. Either way, it's cool to know that I know each of these players on a somewhat personal level, even if I just scratched the surface in my few minutes with them.

Bernard and I sat down at a table and had a one-on-one conversation in which I asked him about his thoughts on carrying the load for a team like the Bengals, who would face the Ravens and Steelers stout defenses every year. Bernard impressed me with his responses.

Bernard said he wants to fit in where ever a team decides to put him and the biggest thing for him is just getting his "feet on the field."

"Being physical is the biggest thing about being a running back"

The Bengals surely selected Bernard to be a compliment for BenJarvus Green-Ellis, but he is also likely the future of the position as well. While he doesn't quite have the bulk that Green-Ellis has, he may have the ability to carry the ball between the tackles as well. He is a reliable receiver, though, and should help the Bengals ground game as well as their passing game.

My time with Hunt was far less personal, but he still impressed me just as much. He's not only a physical freak and an extraordinary athlete for someone his size, but he seemed intelligent and had a good head on his shoulders. He's new to football in general, though, which may make some people worried about what he can do in the NFL. However, somebody this athletic should be a massive weapon, especially if they're willing to learn.

Hunt, if you didn't know, is not American. He was born and raised in Estonia and came to this country as a track and field star. While at SMU, though, he turned to football. Because he is still learning the game of football, his potential could be considered almost unlimited. He also let slip that he learned the majority of what he knew about football at first from the Madden video game series.

Hunt said he now pays attention to players like J.J. Watt to better himself.

"J.J. Watt is definitely one of the biggest one," he said on Sunday. "He's a big dude. He can move really well. He can play every position in the defensive front. I like to look at him a lot. The entire New York Giants defensive line. They're talented. The 49ers as well, with Justin Smith and Aldon Smith." 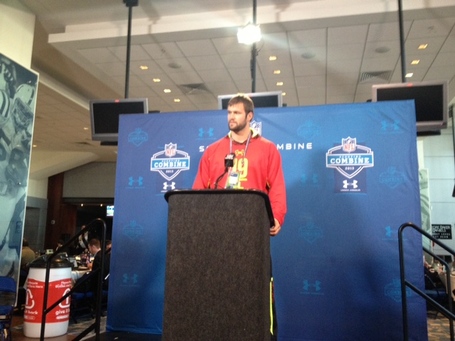 Hunt was also asked to describe his country. Estonia is a small country in Northern Europe north of Latvia and west of Russia. The country was declared independent following the Bolshevik Revolution and was occupied by both the Soviets and Germans durring World War II. Of course, all of that happened before Hunt, 25, was born. To Hunt, Estonia is a beautiful and modernized country.

"It's a great country," Hunt said. "If you want to visit, go in July. We do have houses. It's not a third-world country. We do have roads. We do have electricity and Internet. It's a tiny country. It's a beautiful country."

Also, Hunt in Estonian translates to Wolf. That is awesome.

Bernard and Hunt weren't the only players I found impressive at the Combine, but their time at the podium stuck with me more than many of the other players I listed to as they answered questions. Regardless of what any analyst says about the picks, I'm happy with their selections.