The Cincinnati Bengals continue a theme of defense, using their third consecutive pick at the needed outside linebacker position.

Share All sharing options for: 2013 NFL Draft: With The No. 118 Pick The Cincinnati Bengals Select Texas A&M OLB Sean Porter

The Cincinnati Bengals addressed another "need", selecting outside linebacker Sean Porter with their first and only selection in the fourth round. During his junior season in 2011, Porter generated 9.5 quarterback sacks and 17.0 tackles for loss.

Lewis on Porter: "Has great athleticism. He has played inside and outside. He can run and cover. Guy similar to Thomas Howard."

Guenther on Porter: "He's a good cover guy. Took over Von Miller's spot. He offers a lot at the table as far as the different things he can do for us.

Porter can also play inside and is expected to help special teams immediately.

"They need an outside linebacker, and with Porter they got a player who brings them versatility," said Mike Mayock.

"Very athletic, but technically/fundamentally raw," writes resident draft expert Joe Goodberry. "Too reliant on athleticism at times. Did it all for A&M (Pass Rush, Drop into Coverage)."

Porter committed to then-Houston head coach Kevin Sumlin out of high school during the recruiting process, but decided to take his game to a better league (Big-12 versus Conference USA) when Mike Sherman and Texas A&M called. Now that Sumlin has relieved Sherman as the Aggies’ head coach for the 2012 season, Porter gets to suit up for the player-friendly but stern coach that once recruited him.

Sherman made good on any promises he may have given to Porter about playing time in his freshman year. He played in all 13 games, starting twice -– including the team’s Independence Bowl loss to Georgia, while making 42 tackles, four for loss, and a sack. The following year he was credited with 74 stops, seven for loss and six pass break-ups (with three against Oklahoma) while starting every contest. Once Porter’s All-American teammate, Von Miller, was picked second overall in the 2011 draft by Denver, the pass-rusher mantle was passed; the honorable mention All-Big 12 selection accumulated 79 stops, 17 tackles for loss and 9.5 sacks as a junior in the Aggies’ 3-4 defense.

With a new coaching staff came a new scheme, and in Porter’s senior year he played both the strong side and weakside linebacker spots in a 4-3 defense. He went through some growing pains and saw a dip in production (66 tackles, 6.5 tackles for loss, 3.5 sacks, 1 interception), but developed in many key areas, particularly in pass coverage. 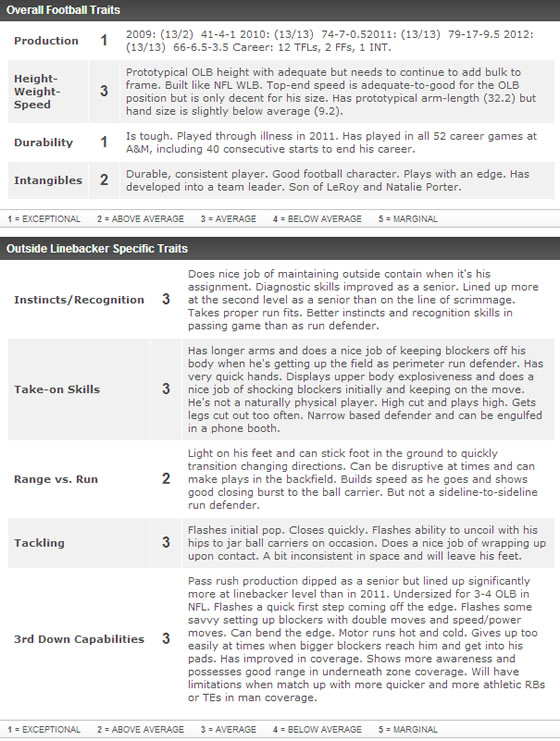