The Cincinnati Bengals added another running back with the first of their two sixth-round selections.

Share All sharing options for: NFL Draft: With The No. 190 Pick The Cincinnati Bengals Select Nebraska RB Rex Burkhead

Even after selecting Bernard Giovani in the second round, the Bengals needed to continue building the position with prospects after it was left unattended for several years, save for signing BenJarvus Green-Ellis and drafting Dan Herron last year during the sixth round.

"Below average speed, athleticism and power, but he takes angles to use against defenders well, knows where the first down marker is and has VERY natural hands," writes resident draft expert Joe Goodbery.

Bengals will love Rex Burkhead. Tough guy, will be good on special teams. under-rated back who can catch, too.

Mel Kiper Jr on Rex Burkhead: Nice kid to have on your football team. Can help on special teams.#Bengals

Slasher who uses his foot quickness to find his way through traffic to move the chains. In one-back or two-back sets, can start with the flow then cut back into a running lane, spinning through trash on his way to consistent four or five-yard rushes. His lateral quickness comes into play when penetrating defenders look to corral him; somehow he finds a way to cut left or right to run away from their waiting arms. There's no questioning his toughness, carries the mail 30 times a game and gives great effort trying to use his good lean to plow through arm tackles for extra yardage. Not used as a receiver very often, but his solid hands, quickness and agility will make him a valued weapon in the passing game. Those hands make him a solid safety valve punt returner, as well, even if he hasn't yet shown explosiveness in that duty. 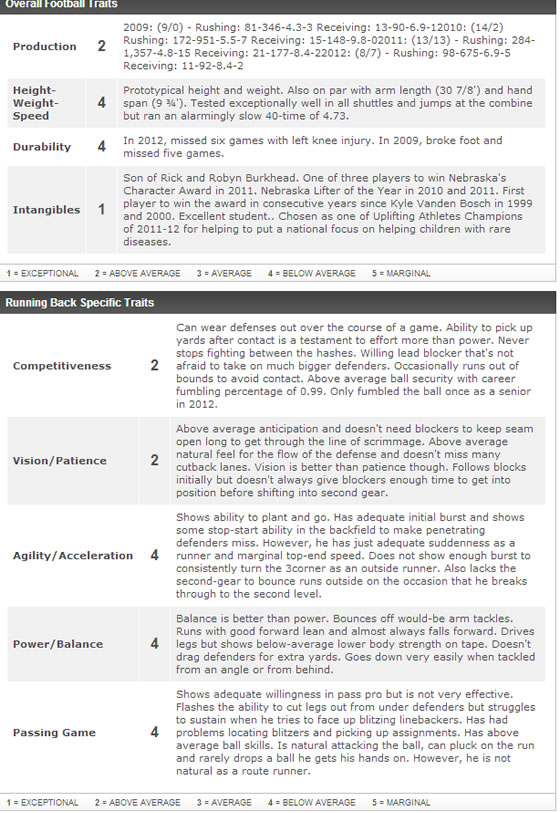