Share All sharing options for: 2013 NFL Draft: With The No. 197 Pick The Cincinnati Bengals Select Arkansas WR Cobi Hamilton

"Hamilton has nice speed and size," writes Joe Goodberry. "He's mostly a one-speed guy with a longer stride. He offers some YAC, but it's reliant on speed and space. His routes need work and Hamilton isn't physical at all. Any contact or disruption of his sight-line to the ball causes him trouble. He catches better with the ball in front of him; he doesn't attack it."

Big target with a well-built frame who projects as a potential outside starter. Uses his body to get position on his man on inside routes. Displays an extra gear once he gets the ball in his hands. Physical after the catch, showing the ability to break arm tackles. Flashes a quick move after the catch and the balance to leave a leaning cornerback behind, can also stiff-arm smaller defensive backs trying to wrap him up in space. Will through jams at the line of scrimmage, but still needs to improve in this area. Sharp cuts on inside breaking routes at the top of his stem. Adjust well to the flight path of the ball in the air. Should only improve his overall skill set with more opportunities. 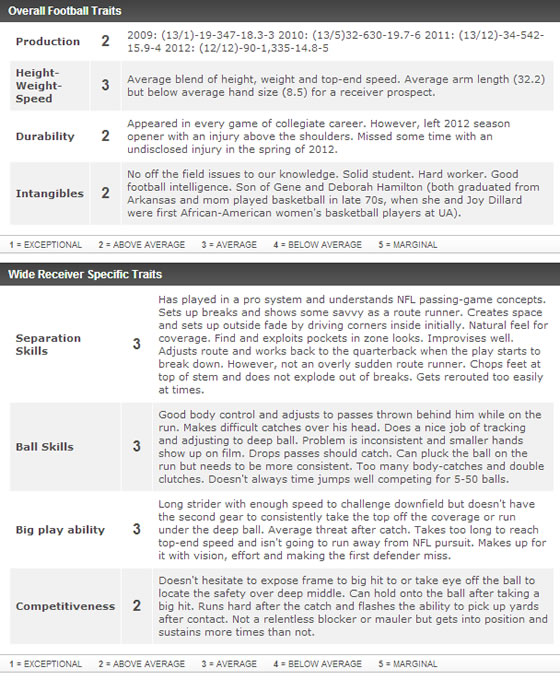