The Cincinnati Bengals added their second offensive lineman of the 2013 NFL draft.

Share All sharing options for: 2013 NFL Draft: With The No. 240 Pick The Cincinnati Bengals Select OSU OT Reid Fragel

The Cincinnati Bengals added their second offensive lineman with their No. 240 pick with Ohio State offensive tackle Reid Fragel.

"A former tight end that converted to offensive tackle, Fragel is athletic with good balance that's really progressed in the run game as he's gotten bigger and stronger," writes resident draft expert Joe Goodberry. "He flashed very high potential in a few games and he's viewed as a future NFL left tackle. Consistency and technique need refinement, but at the rate he has progressed so far, it gives you an idea of where he's heading."

The departure of both of Ohio State’s starting tackles from the 2011 season forced Buckeyes coaches to look for answers at those crucial spots. It was no surprise that they picked Fragel to move inside from his blocking tight end role last spring, and during the offseason his frame easily added the weight necessary to play in the Big Ten. He then went on to start all 12 games at right tackle for the Buckeyes during his senior year.

Fragel was a Detroit all-metro pick as a senior, and played every game his first three years in Columbus. After playing on special teams as a true freshman, he started five games in 2010, catching nine passes for 121 yards and a touchdown against Iowa. Fragel started four games in his junior year, but continued to be mostly used as a blocker in the run game (five receptions, 64 yards) for a team lacking a great passing offense. 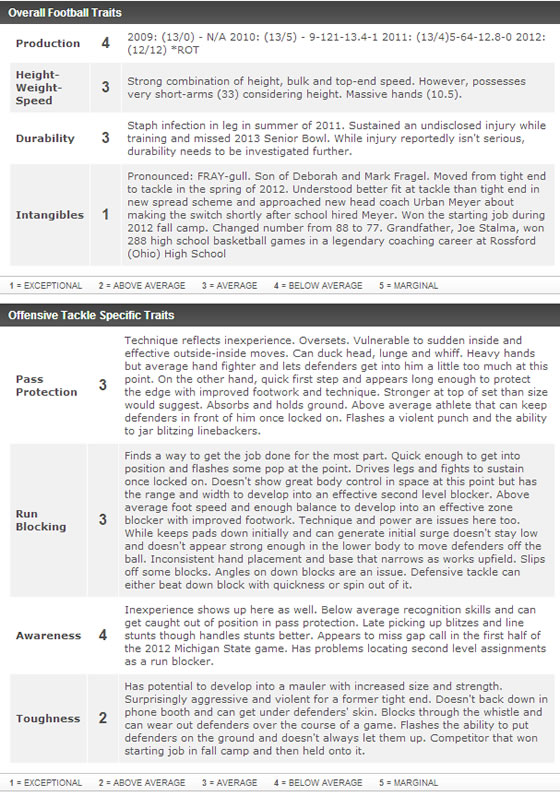