The Bengals added an offensive lineman with their fifth round pick in the 2013 NFL Draft.

Share All sharing options for: 2013 NFL Draft: With The No. 156 Pick The Cincinnati Bengals Select Kansas Guard Tanner Hawkinson

The Bengals added some depth to the offensive line in the fifth round by selecting Kansas linman Tanner Hawkinson. Hawkinson, listed as guard by some and tackle by others and has started in 48 consecutive games for the Jayhawks.

Hawkinson G-C type. Could back up all 3 spots behind Cook, Robinson

The Bengals have their starters likely set on the offensive line with an exception possibly being at the center position. A guy like Hawkinson is still valuable, though, as he can add depth to more than one position, helping the Bengals out greatly if players are injured.

Alexander on Hawkinson: "Smart guy. very athletic His athleticism reminds me in some style to Steinbach, not as good though. He needs some strength. Needs to grow into it and he'll be a good player."

STRENGTHS Frame has filled out during his career, should continue to do so early in his NFL career. Still possesses foot quickness to lead off-tackle runs, be effective on zone blocks, and reach/negate second-level targets. Lateral movement in pass protection is adequate to cut off the corner, has the length to push rushers around the pocket. Picks up twists adeptly. Quick getting down on back-side cut blocks.

WEAKNESSES Lacks adequete strength. Can be bullied into the quarterback by powerful linemen and lacks the upper body to hold off defenders once they get the advantage inside. Stops his feet in pass pro at times, causing him to bend at the waist. Also overextends when attacking linebackers off the snap and quicker defenders in space. Doesn't play with balance.

BOTTOM LINE Family tradition led Hawkinson to Lawrence, as several of his immediate family members are Kansas alums (except his father, who went to rival KSU). He's been a fixture on the Kansas line, as shown by 48 consecutive starts. He's showed off his athleticism while adding weight every season, but he'll need to prove he can play with better strength and balance in order to be selected late in the draft. 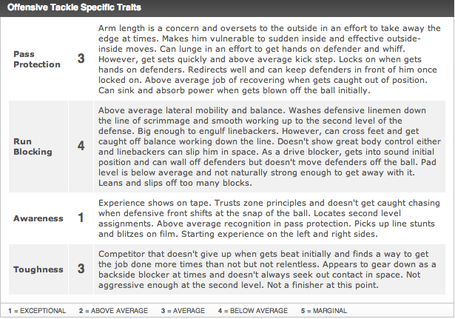