BB: Running Back Class Affords The Bengals Luxury And Options During The NFL Draft

We take a look at the possibility that the Bengals may delay drafting a running back until later during the NFL draft to address other needs and upgrades. We also look at backup quarterbacks and some bacon bits.

Share All sharing options for: BB: Running Back Class Affords The Bengals Luxury And Options During The NFL Draft

+ With Bernard Scott unlikely to return (though we're allowing the possibility in competition battle) and Brian Leonard signing with the Tampa Bay Buccaneers this week, the widening gap on Cincinnati's running back roster has become too extreme to sweep under the rug. BenJarvus Green-Ellis, a short yardage back that led the NFL with the most third-and-one conversions last season, figures to lead a trio of running backs with a balanced distribution philosophy. Yet there remains vacancies at backup (the "two" in the one-two punch) and the necessary third down specialty (though Cedric Peerman could factor into that role).

Despite a half-hearted effort that "went through the motions" to find solutions during free agency, the Bengals are clearly developing a gameplan to rebuild the position through the NFL draft.

We caution those with high expectations. Don't expect a first-round prize. Maybe disregard the first of two selections in the second round when Cincinnati cashes in from the Carson Palmer trade in 2011. Why, my obsessive brother and sister asks. The position is stacked with talent, but few experts believe that there will be a run at the position until the second round. Even if the Bengals neglect the retina-burning need at running back until their 53rd pick, there will be enough talent remaining to justify alternatives by bolstering their depth on defense (safety and linebacker).

"Running backs are spread throughout the draft somewhat evenly, and it's a crap-shoot position. We see it almost ever year," says NFL draft expert Dan Kadar from Mocking The Draft

"To call this year's running back class stacked is a fair assessment, for the most part," Kadar tells us. "There is a clear top tier of running backs this year. That includes Eddie Lacy, Giovani Bernard, Johnathan Franklin, Andre Ellington and Joseph Randle. A couple of those player should be available with the 53rd pick."

"This is one of the deepest classes in years and that's without mentioning Joseph Randle and Andre Ellington," our own Joe Goodberry reflects. "That's seven backs that could be drafted in the top 100 picks. I'm not even sure there are seven starting running back positions open in the NFL. After Eddie Lacy, there isn't a consensus number two running back. Many have (Giovani) Bernard penciled in there, but Johnathan Franklin is making a late push in media circles."

Let's project the idealistic realities of the NFL today with an honest assessment amongst ourselves. Of the positions facing the greatest necessity, the Bengals aren't necessarily tied to a running back with their first three selections - two in the second round. Applying a BPA (best player available) approach, the Bengals find possible (perhaps even probable) scenarios where running back can be delayed further while continually applying upgrades at positions that face similar shortages.

"There really isn't a specific round where value can be had," said Kadar. "Running backs are spread throughout the draft somewhat evenly, and it's a crapshoot position. We see it almost ever year. Whether it's a sixth rounder like Alfred Morris last year or a third rounder like Demarco Murray two years ago, good running backs can be found after the first two rounds." 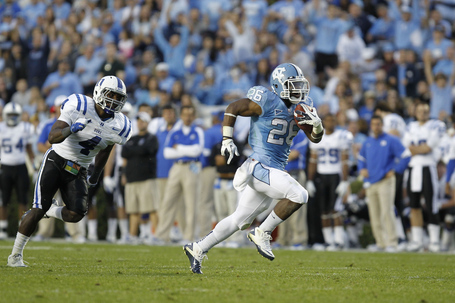 "If the Bengals are looking for a solid all-around back, there will be some with the 84th pick, most likely," Kadar continues. "Someone like Mike Gillislee of Florida is solid. He's a poor man's Doug Martin. Jawan Jamison of Rutgers hasn't been timing well during the offseason process, but he's impressive on the field. There are also some good speed backs like Kenjon Barner and Kerwynn Williams that will be around later in the draft."

Playing it smart while maximizing value, the Bengals should avoid touching a running in the first round to maximize the value elsewhere. Most of us realize that already, but if Cincinnati wants the cream of the crop, there's a decent enough chance that the Bengals have an opportunity to acquire one of the top running backs in this year's class... in the second round.

"The run on ball carriers should start when the second runner is drafted," said Goodberry. "The Bengals may very well start that run at pick 37, but by waiting until the Cardinals, Jets, Rams or Steelers start the run could allow the Bengals to wait until pick 53 and still get a very good RB prospect."

After the Cincinnati Bengals claimed quarterback John Skelton, now what?

Here's how we view the potential scenario. The recently signed Josh Johnson cracks his knuckles while the even newer acquired quarterback John Skelton figures to de-throne Johnson from the perceived title of backup quarterback. Experience benefits Skelton. Intrigue and unique packages benefits Johnson, as does Jay Gruden's familiarity. If we were to guess, Johnson has a slight advantage but the reoccurring (and nagging) thought continues to pound.

No one wanted him last year.

After being released from the San Francisco 49ers during final cuts, Johnson became another unemployed quarterback in a very long unemployment line. Finally the Browns signed him, but not until they faced a serious issue following injuries to Colt McCoy and Brandon Weeden. Granted, the issue for Johnson has always been the lack of opportunity.

Skelton, on the other hand, has the key word that obsessive analysts measure in a quarterback.

"My biggest strength right now is a strong arm," Skelton tells Joe Reedy with the Cincinnati Enquirer. "I’m still young. I’m still learning the game. But when it comes to driving a 20-yard comeback or a crossing route down the field, that’s a throw I’m comfortable making."

Unfortunately, when you look at the bottom line, the competing backup quarterbacks have a combined 20-35 touchdown-to-interception ratio in their erratic NFL careers.

I believe Cincinnati's suspected plan to draft a quarterback late during the 2013 NFL draft remains untouched; though my early projection is that a rookie quarterback becomes a developmental project (unless he dominates Johnson and Skelton during training camp). It's just as likely that Cincinnati goes with an undrafted free agent instead.

Most people will attempt arguments to feel good about Johnson and Skelton as competing backup quarterbacks... and God bless those people. However if Andy Dalton suffers a sustained injury, no one will feel good about that.

+ Once Vincent Rey was tendered, there was no chance of him leaving. As an exclusive-rights free agent, Rey isn't allowed to negotiate with other teams after the tender was given. Hence, the word exclusive. Special-teams is the most non-sexy aspect of football. Yet it proves time and again to be one of the most instrumental determining the success and failure rates of ensuing possessions, even before they begin (think field position). Rey has been part of the same special teams unit that's collectively viewed as one of the best units in the NFL.

+ Just thinking out loud. I'm not sure that the Cincinnati Bengals will be able to re-sign Michael Johnson, Geno Atkins and Carlos Dunlap to long-term contracts. The potential for those contracts combined will be astronomical. Two out of three? Yes, and I believe one of those will be Atkins. However, don't be surprised if the Bengals address this issue sooner rather than later with a pass rushing specialist during the first two days of the 2013 NFL draft. My dark horse corresponding to our opening story.

+ I have huge respect and love for Dave Lapham, but the more I think about it, no scenario exists that I can support projecting a tight end being drafted during the first three rounds.

+ Leon Hall and Terence Newman as the projected starting cornerbacks? I'm fine with that. Considering that the Bengals mostly use a five defensive-back philosophy to counter the increasing number of three-wide sets, especially in a division once known for power running, the Bengals need a trio of solid cornerbacks. Dre Kirkpatrick, it's up to you now.