Reggie Nelson is making a name for himself, closing games (or at least the opposing offenses chances to tie/win). And he did it against the Chargers.

Every win in 2012 has it's marquee moments. Memorable points that are easily recalled in the minds of fans, apparently bored enough to stage momentous day-dreaming sessions. The Geno Atkins sack early against Oakland, pile-driving Carson Palmer to the ground in front of an appreciative crowd at Paul Brown Stadium. You're smiling right now. Good.

Andrew Hawkins' magician-like sprint to score a 50-yard touchdown against Cleveland. Mohamed Sanu's touchdown pass against the Redskins, capped by a Michael Johnson performance that punished Robert Griffin III. A Cedric Peerman fake punt against Jacksonville, the defensive performance against the Giants, the first-half domination against the Chiefs, the Leon Hall interception against the Philadelphia Eagles that turned Cincinnati's tide, or half-a-dozen plays against the Pittsburgh Steelers.

Yet the Bengals beat the San Diego Chargers in week 13 and you're thinking, what exactly is the big deal about that? What do you recall, outside of Anthony Cosenza doing this? (yes, that really happened)

We could call it the forgotten win, the no-big deal victory -- though why not classify that to wins against the Chiefs and Raiders? The (6-5) Cincinnati Bengals, having rebounded from a four-game losing streak earlier during the season with a three-game winning streak, head west to open December in San Diego.

It was a battle of struggling offenses, bouncing turnovers and stalled three-down possessions, highlighted by intense pass rushers -- at least from Cincinnati's perspective. Another big run by BenJarvus Green-Ellis, scampering 41 yards, or twice as much as any reception by a Bengals receiver. There's the "9" route and the A.J. Green deception play that we'll discuss later.

Let's fast-forward to the 2:47 mark in the fourth quarter after Cincinnati secured a seven-point lead with a Mike Nugent 24-yard field goal.

Perhaps it's the most frustrating aspect of football when your favorite team secures the lead; the perceived inability to stop the opposing two-minute drill, which in reality is an approved philosophy. Go ahead. Enjoy the 17-yard gain. You're not getting in the endzone. You see it in every close game and you hate it more each time you watch it, even though you have a surplus of faith in defensive coordinator Mike Zimmer.

But sometimes it does backfire. Eventually San Diego has a fourth and ten from Cincinnati's 17-yard line with :55 remaining.

A 17-yard pass ties the game. And only ten yards sustains a possession with enough time on the clock that neutralizes the decreasing seconds due to the proximity of the endzone. In fact it's shifts into San Diego's favor, because now the Bengals would have no time to offer a response.

Hall, Maualuga and Burfict drifted to the first down marker. Newman and Jones played the sidelines while Crocker and Nelson played cover two. Rivers quickly identified Newman's coverage and immediately made an endzone attempt to Marcus Floyd down the right sidelines. 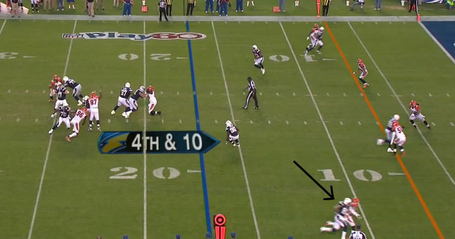 It was a dumb decision.

Nelson had been monitoring with comfort in cover two and considering he was already patrolling the "R" in the endzone, there wasn't much ground required for Nelson to break. Even less time considering that Nelson was reading the quarterback's eyes. 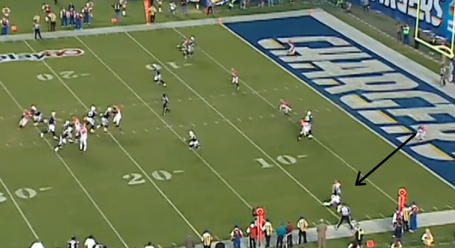 Nelson jumped the route and picked off the football in the endzone. 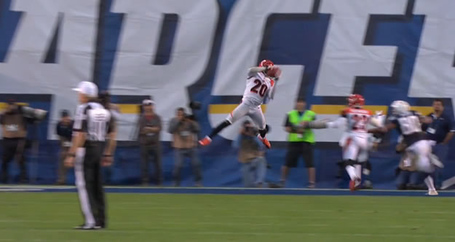 It wasn't even close.

If you're a fan of the San Diego Chargers, you have to ask yourself: Why would Rivers even attempt the pass?

Newman easily secured inside position throughout the entire route, locked into Floyd's hip-pocket. Even if Nelson stayed home, at the very least Newman deflects the football and the incomplete leads to a turnover on downs. Bengals win. Antonio Gates tries over the middle, but Nelson was already patrolling the area, and even hinted at Gates as his assignment. Maybe even goaded Rivers to make a bad read. 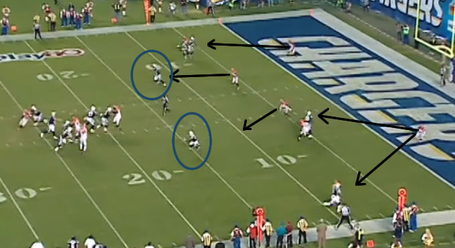 At best, two underneath routes were open, but would require at least one missed tackle (from either Maualuga or Burfict) to pick up the first down.

The other question is the play itself, essentially wiping out three routes against four defenders that expertly shutdown those routes. There was no reason to risk it on a single play and the Chargers coaching staff couldn't possibly be naive enough to think that Cincinnati wouldn't be sitting on those routes, maintaining an advantage in the endzone.

Maybe that's why they have a new coach and persistent questions about Philip Rivers remains unanswered.

Either way, Nelson earned the nickname "Closer" after an interception against the Chargers, and another several weeks later against Pittsburgh that put Cincinnati in an unexpected position to claim the final postseason berth in the AFC.

In the meantime, this game, somewhat of a forgotten win, put Cincinnati two games over .500, and save for a loss against the Cowboys, was just another step on that postseason ladder.