The Cincinnati Bengals couldn't get rid of the Browns in week two. During a third-and-ten in the fourth quarter, what almost started as a sack turned into a two possession lead and an eventual win.

Share All sharing options for: Top Plays of 2012: Andrew Hawkins being Hawkins-like

The Cleveland Browns tend to be a colossal pain in the (alternate name for donkey). They do this sometimes, either initiating a shootout or playing tough enough to force a final possession that dictates the game's outcome. And it frustrates us. It's not that we feel that Cincinnati is better than Cleveland... well, actually it's exactly that.

Holding off the Browns with a 24-17 lead and 11:01 remaining in the game, the Bengals have third and ten from midfield. And it began with prophesied visions of "uh oh". 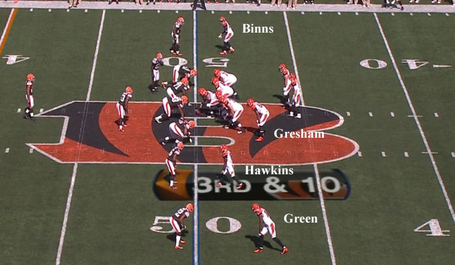 As Jake Liscow noted last week reviewing what he called the "improvised play of the year" (how about "improves play in the history of Earth), Dalton was forced to avoid a pass rush. Ahtyba Rubin played a one-technique between Jeff Faine and Kevin Zeitler; the rookie right guard picked him up. Strong was Zeitler, wide base, legs moving, a good technique was completely neutralized after Rubin used Andre Smith's block on Jabaal Sheard to pick Zeitler. 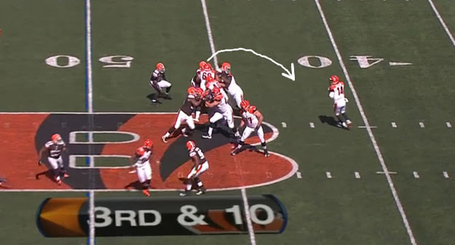 In the meantime, Hawkins uses a false outside step then slants inward. In reality, it didn't help Hawkins attempt at separation from defensive back Trevin Wade. When Dalton began scrambling, Hawkins took note, defied physics with an all-stop. Wade, unable to do the same, drifted away from Hawkins, giving the receiver plenty of separation for Dalton to comfortably make the completion.

Hawkins caught the football and then did what Hawkins typically does. Here's an accurate recreation of Hawkins' route and his post-reception run that scored a touchdown to give Cincinnati a 31-17 lead. 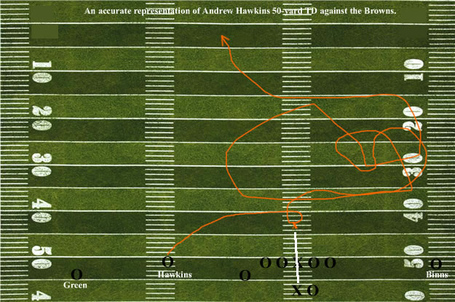 (analysis suddenly stops as Josh just stares at the GIF)