When the Cincinnati Bengals offense took the field for the first time against Cleveland, they were already winning 7-3. Here's why.

When Cincinnati changes pace by replacing Brandon Tate with Adam Jones on punt return, your hands rub together, as if you're anticipating a master plan taking shape that benefits the conductor. Admit it. When Dan Hoard updates you (because you're listening to the radio while watching) that Jones is returning, your eyes widen, your grin rises and you look at your wife/girlfriend (significant other) not unlike a cialis commercial.

Yes. Something is probably going to happen.

And it's going to be fantastically explosive.

Cleveland opens the game generating a first-down on a Travis Benjamin end-around that picks up 13 yards close to the left sidelines. Vincent Rey and Reggie Nelson limited Trent Richardson to limited two-yard gain, and eventually the possession ended with an incompletion (overthrown) and Michael Johnson quarterback sack (aka, the Ninja-like leg sweep).

It's fourth and 13 from the Browns 28-yard line with 13:35 remaining in the first quarter. Reggie Hodges punts the football 53 yards, easily clearing his coverage team where Adam Jones hauls in the football at the Bengals 19-yard line.

Jones avoids the first man, and then five other tackles. 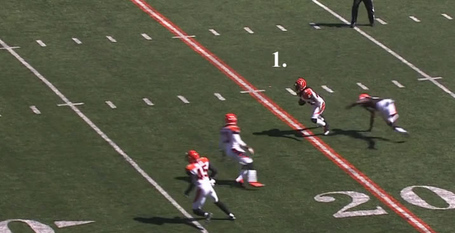 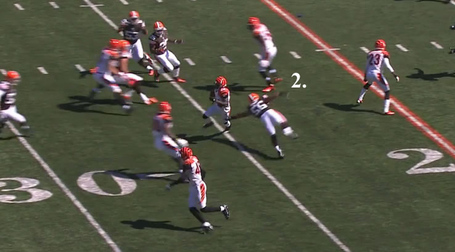 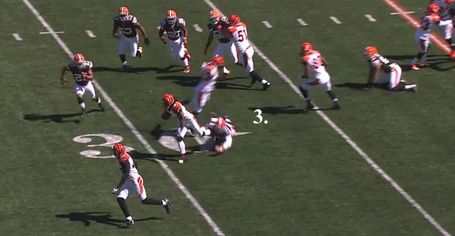 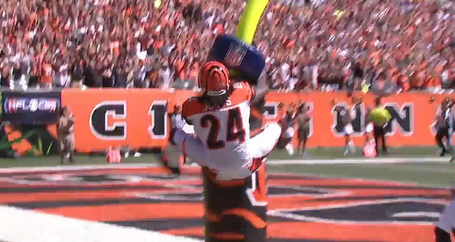