Top Plays of 2012: The perfect play-action against the Giants

We continue looking at the top plays of 2012 with the perfect play-action against the New York Giants.

Share All sharing options for: Top Plays of 2012: The perfect play-action against the Giants

There's a certain musical essence when the perfect football play is executed. Eleven chess pieces synchronizing with perfection, allowing for a quick strike that not only gives Cincinnati an early lead, it sets the tone for an eventual blowout. When that moment happens, the essence of everything culminating into the perfect play is euphoric. From the coaches that call and design the play, the players for executing the play and the fans for being rewarded with patience.

Maybe it's not the perfect play, but it's close.

After the New York Giants deferred the winning the coin toss, Brandon Tate returns the game's opening kickoff 24 yards to the Bengals 21-yard line. Four plays into a drive that gained seven yards (Green reception), five (Green-Ellis run), seven (Green again) and four (Green-Ellis again), the Bengals have first and ten from their own 44-yard line with 12:43 remaining in the first quarter.

Dalton takes the snap from Trevor Robinson, fakes the handoff left and rolls out right. In the meantime, the Bengals offensive line blocked down, expertly selling the Green-Ellis' fake. Chris Pressley bounced to the right, neutralizing Justin Tuck while Brandon Tate cut a blitzing Antrel Rolle, who was blitzing off the edge.

The entire New York Giants defensive line has been neutralized. Linebackers heavily bit the fake, pulling themselves out of coverage. Jermaine Gresham made an initial step to declare himself as a run blocker, then exploded into a deep post.

Dalton is now rolling out, completely cleared of defenders.

After Tate's cut block, the receiver took off into the flats, leaving Rolle unattended. As Dalton leans back near the hashmarks and identifies his target, Rolle recovers and rushes.

While that's going down, Bengals wide receiver A.J. Green is having a little fun. After the snap, Green fires out with plenty of cushion provided from cornerback Corey Webster.

Green's route is pretty standard. Briefly angling towards the right sideline, Green's route goes vertical. Webster, acting like its first period in high school trying to dig the sleep out of his eye, gets spun around. Yet based on his lackadaisical attempt to cover one of the best wide receivers in the NFL, it's clear that Webster was under the impression that help was going to be provided over the top.

By this time Dalton reached back and unleashed his furious deep ball. Even worse for the Giants, Webster made no effort to recover, watching Green settle under the football -- which was slightly underthrown. 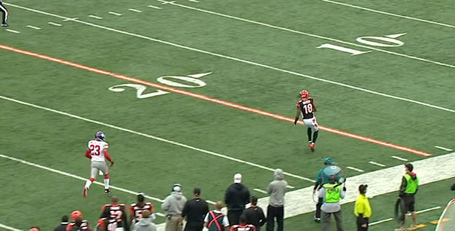 On the other hand, Gresham was closing into Webster's position on his flat post that we identified earlier. Either the play-action wiped out every defensive coverage, or the Giants were that bad, because Green wasn't the only wide-open receiver deep. 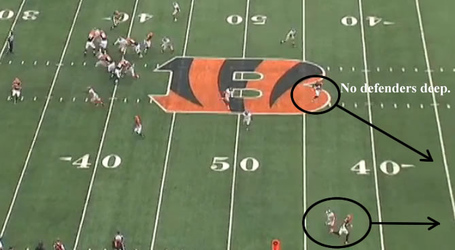 It's nice to have more than one choice when deciding who will score the 56-yard touchdown. Obviously Dalton picked Green, who caught the football and easily scored the game-opening touchdown. The early first quarter score gave Cincinnati a 7-0 lead, setting the tone that would eventually lead to a dominating performance.