One of the most anticipated games in recent memory for the storyline that it brought, Bengals defensive tackle Geno Atkins become a fan's expression.

Perhaps pettiness is the motivation that demands inclusion. For several months following the conclusion of the 2010 season, we were obsessed and consumed with Carson Palmer. Sometimes divisive, otherwise irritating, as Bengals fans we were pummeled. Not by the relentlessness of the debate, rather the implications and feeling of loss.

It didn't matter as much that Carson Palmer was demanding a trade. He was a quarterback on the decline that became more of a liability. It was that Cincinnati just submitted a four-win season and the starting quarterback was choosing retirement over a continuation of his career. Talk about helplessness.

Obviously things worked out. And once confidence and optimism returned, a renewed focus of disdain for Palmer began to really take shape. Then the schedule was released for the 2012 regular season. There it was. Now we can write that final chapter, telling last story. Carson Palmer and the Oakland Raiders traveled to Cincinnati to play the Bengals on November 25. It was perhaps one of the most anticipated games in a very long time.

Cincinnati won the coin toss and deferred. Running back Marcel Reece picked up 13 yards on the opening two plays from scrimmage, reaching Oakland's 35-yard line with 13:36 remaining in the first quarter. It's first down and ten.

Geno Atkins plants his fingers into the ground, playing a three-technique outside the right guard.

It was already over. Perhaps destiny played a role. Why not? It sounds good.

Atkins powered through his block, driving into Palmer's side and allowing gravity to express Cincinnati's appreciation. Michael Johnson approved. 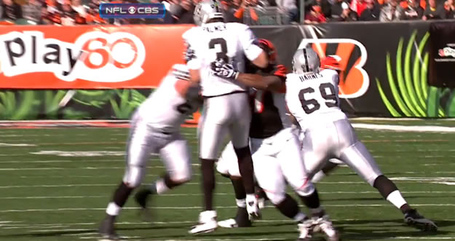