Top Plays of 2012: Michael Johnson gets into the act

Share All sharing options for: Top Plays of 2012: Michael Johnson gets into the act

You had a feeling that following Geno Atkins' first quarter sack against the Oakland Raiders, that the tone was being set. The Bengals were geared up, not just for a memorable win, but punishing Carson Palmer and, by association, the Oakland Raiders.

Johnson held the edge momentarily while Geno Atkins went all-out to force Palmer up into the pocket.

Vontaze Burfict, blitzing on the play, holds at the line of scrimmage and forces Palmer to redirect. Palmer, with the grace of Chris Farley's insurance salesman act on Saturday Night live, drunkenly stumbles for a lane.

Michael Johnson tracks Palmer down from behind to record the second sack on Oakland's opening possession.

As aggressive as the defensive line was, the secondary added the greatest contribution. Oakland used a trips formation. Cincinnati countered with a traditional nickel. 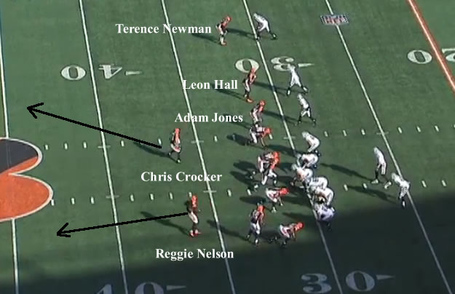 By the time Palmer is forced to scramble, the secondary has a firm handle on the routes; none appearing to have reached the first down marker anyway. 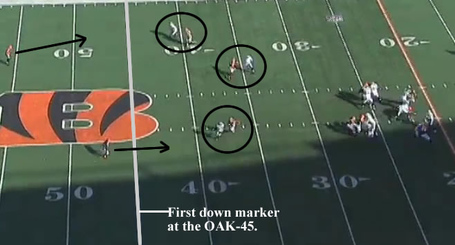 After Johnson drops Palmer, the Raiders are forced to punt. Cincinnati answers with a five-play, 58-yard drive, capped by a BenJarvus Green-Ellis touchdown, taking a 7-0 lead.

It was a good day.