CincyJungle attends Taste of the NFL

Share All sharing options for: CincyJungle attends Taste of the NFL

In an attempt to land a big interview for the 100th episode of CincyJungle's WhoDey-Weekly podcast I made an attempt to get in touch with Katie Blackburn, daughter of owner Mike Brown. It was a long shot for sure, but Katie came through huge. 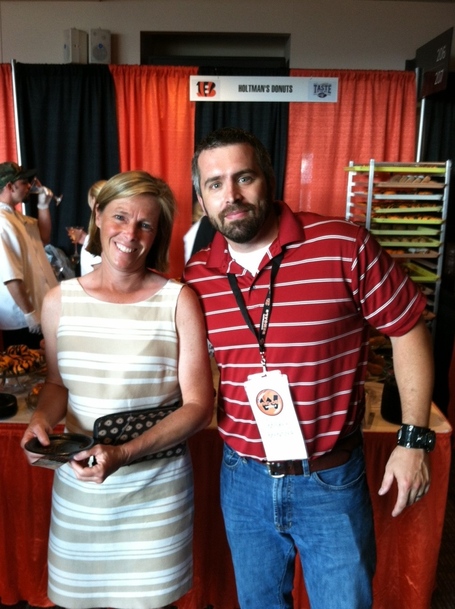 She could not personally do the interview so she set us up as VIP's at the Freestore Foodbank's event The Taste of Cincinnati. Going into the event we were not sure who would be there for us to talk to. How about everyone.

First I want to touch on how great of an event this was. Presented by the Freestore Foodbank this was an opportunity for fans to connect with the coaches, players and front office for the Cincinnati Bengals. Over 40 local restaurants offered food tastings and beverages and there were silent \ live auctions for some really great items. If you are not familiar with the Freestore Foodbank this is from their site:

The Freestore Foodbank distributes over 19 million pounds of food annually. In 20 counties in Ohio, Kentucky and Indiana, we have a trusted network of over 275 local member agencies. Member agencies include soup kitchens and shelters, food pantries, churches, daycare and senior centers, and many other community and social services organizations.

Beyond that, this event was held right after OTA practice was wrapping up for the team, so players were already at the stadium and were excited to be a part of the event. Walking around I was able to see almost every Bengals player interacting with fans and it was awesome.

Upon arriving we were able to set up our mobile studio in the CBS\FOX press box. All the lights and camera positions were labeled with the CBS mark or FOX mark. I have watched many broadcasts from there and it was cool to be in that spot. I even got to rub elbows with some other major media players Solomon Wilcots and Merril Hoge. 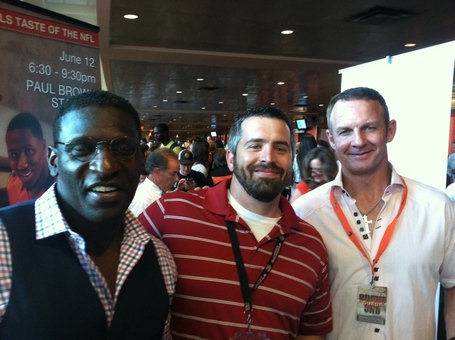 The event was scheduled to run from 6:30 - 9:30. We were at Paul Brown and set up by 5:00. We had access to coaches and players to ourselves for about an hour before the masses entered. I was able to secure audio interviews with Marvin Lewis, Hugh Jackson, Andrew Whitworth, Dre Kirkpatrick, Tyler Eifert, Chris Pressley and Dave Lapham. (we will be sharing those in future posts). On top of that I had long conversations with Daniel "Boom" Herron, Marvin Jones, Vontaze Burfict, Kevin Huber, Mike Nugent and Andy Dalton.

I also had the chance to meet and shake the hands of both Mike Brown and Katie Blackburn. I want to sincerely say thanks for the opportunity to hang out and appreciate everything they did for us and more importantly the event. 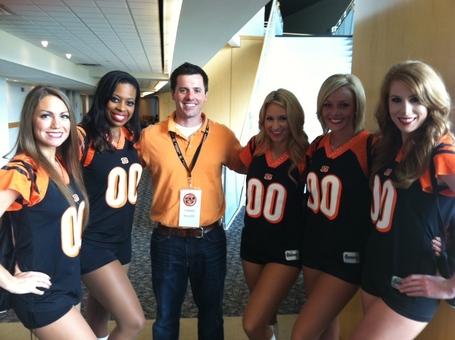