We continue our series of the top plays of 2012 with BenJarvus Green-Ellis' longest run in his career.

No, no, said Jay Gruden, watching Geno Atkins and Michael Johnson. During Oakland's first possession of the game, Atkins and Johnson generated a quarterback sack, forcing the Raiders into fourth and forever. Appreciative, no doubt for the obvious crowd involvement and optimal field position, the offense has their own story to tell. Their own chapter to write. We don't need Carson Palmer. We have a better offense now. A more unified group, hungry to win, but win together. And we want to show him that.

Following Shane Lechler's 51-yard punt and Adam Jones 18-yard return, Cincinnati's offense punched their time-card with first and ten from their own 42-yard line. A quick pass out of the backfield and a three-yard BenJarvus Green-Ellis isolation up the middle forced Cincinnati into a third and one from Oakland's 49-yard line.

With only one yard required to sustained their opening possession, the Bengals called a jumbo package. Along with your standard five offensive linemen, Dennis Roland entered the game, replacing Mohamed Sanu.

This formation is generally called a Tight-Wing, with the Roland coming in as a tight end and placing both tight ends, Gresham being the other, to one side. 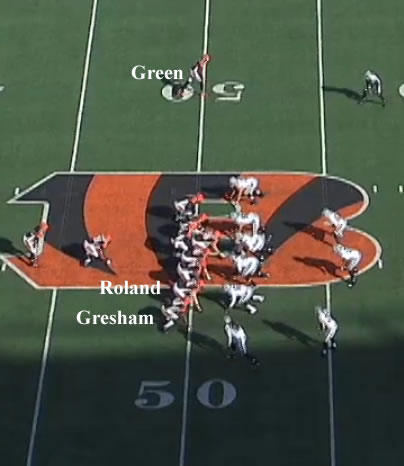 Here's how the assignments are planned.

Andre Smith blocks down into Raiders defensive tackle Christo Bilukidi, playing a three-technique between the guard and tackle. Designed as a chip-block, the momentary shove allows Kevin Zeitler time to gain position and secure the block. This benefits Smith, who, instead of tracking down a linebacker as the second-part of his assignment, can attack the defender upon his approach. 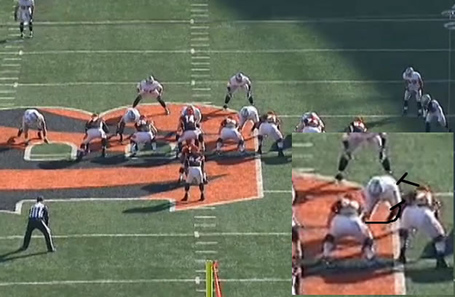 To their right, Dennis Roland and Jermaine Gresham are assigned Lamarr Houston and Phillip Wheeler respectively. For Gresham, the block is easy. Get in the way of Wheeler. Roland's task is more difficult, driving Houston one-on-one without any help. 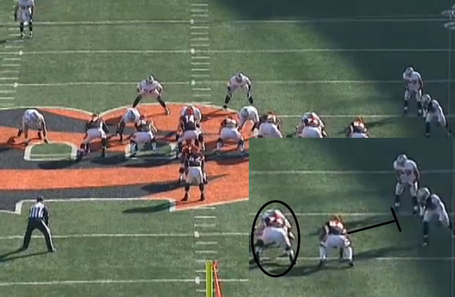 All defenders at the point of attack are accounted for. 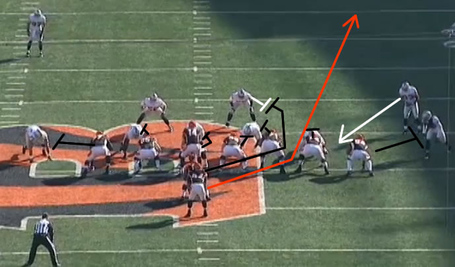 Once the ball was snapped, everyone did their job. Zeitler and Smith sealed Bilukidi inside. Smith wiped out inside linebacker Miles Burris. Along with an artistic Trevor Robinson block on Tommy Kelly, all inside pursuit was walled off.

All that remains is a free-flowing Rolando McClain and Dennis Roland's block on Lamarr Houston. Roland wasn't able to drive Houston to either side or off the line of scrimmage. Fortunately Houston failed to impact the point of attack by disregarding Roland's block. Chris Pressley, perhaps with the most critical assignment, buried his 5-foot-11 frame (with tree-stumps for legs) into McClain and the hole naturally opened.