Top Plays of 2012: The touchdown that Andy Dalton didn't throw

Continuing our top plays of 2012, we arrive at a play that you probably expected us to touch on. The Mohamed Sanu touchdown pass.

Share All sharing options for: Top Plays of 2012: The touchdown that Andy Dalton didn't throw

It's not often that we have the privilege of being in the audience of a coordinator's mind, breaking down a play and why it succeeded. Sure, the typical expressions of execution will always be there, guarding the state secrets that only the NSA and some low-level employ has access to.

"We had a pretty good indication that they were gonna be in Cover-0 when we went wildcat with whoever we had back there other than a quarterback, whether it’s a running back or wide receiver," Gruden told Adam Schein and Rich Gannon on SiriusXM NFL Radio.

So the Bengals started out in wildcat formation on the first play from scrimmage with Mohamed Sanu at quarterback. 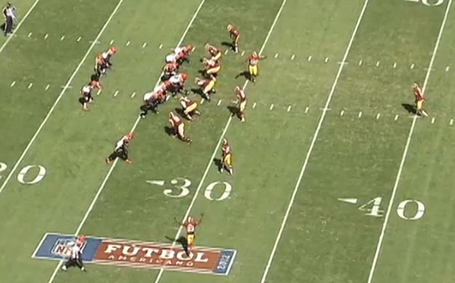 Initially the Redskins showed Cover-One. London Fletcher, you can see, is motioning the safety behind him to approach the box during pre-snap. Towards the bottom of the screen, you see DeAngelo Hall's arms in the air, well aware that something isn't right.

Redskins defensive coordinator Jim Haslett, taking the blame for not practicing the play that week, admits the misalignement.

"The rule was, at the time — and I take the blame for that one: we didn’t practice it all week – but [inside linebacker] London [Fletcher] was trying to check to it when they came out in it, and the rule is, the safety has the quarterback," said Haslett to the Washington Post. "He keeps an eye on him, he doesn’t cover him, just keeps an eye on him. And the corner’s got the wideout, so we just got misaligned."

When Sanu took the snap, the Bengals ran play-action. 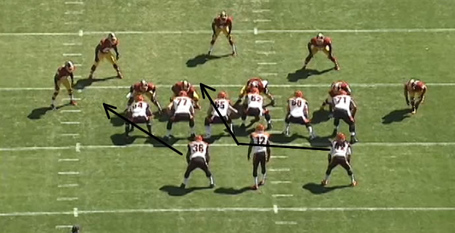 Naturally, you're thinking... this helps. Not really. The linebackers bit hard enough to remain stationary for a click. But considering that there were no underneath routes, no routes outside of Green's vertical, it never impacted the play and the secondary wasn't caught watching.

On the other hand, we're fairly amused by Pressley, who went pedal to the metal on the fake... for at least 20 yards. 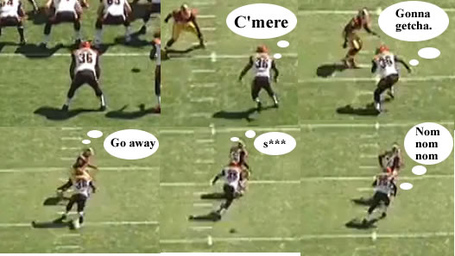 "It took a little bit of time, but the free safety came out of the middle of the field, and came in the box, and we knew we had A.J. one-on-one against a safety," said Gruden.

This was a one-man route. Green, in the slot, ran vertical. Andy Dalton watched and Jermaine Gresham stayed in to block. There were no progressions here. It was all Green, or nothing. 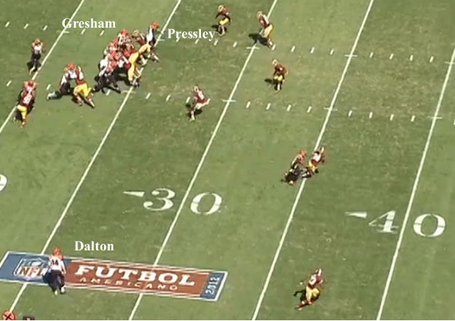 Despite Hall leaving Dalton and helping to cover Green, Washington stood no chance.