Top Plays of 2012: Leon Hall is the offense in Houston

Leon Hall scored the only touchdowns for the Bengals in Cincinnati's two most critical games in 2012. In the Wildcard round in Houston, Hall put the Bengals up 7-6 early in the game with this play...

Share All sharing options for: Top Plays of 2012: Leon Hall is the offense in Houston

The Bengals offense struggled to get going in the first quarter and the defense is bending but not breaking by allowing only two field goals so far. Down 6-0 with 9:40 remaining in the 2nd quarter, Houston needs to convert on 3rd and three. 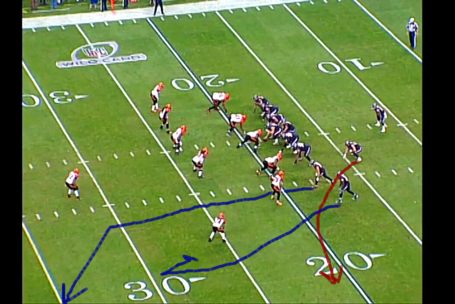 The Texans come out in their '12-Personnel' (1 RB, 2 TE), if you count James Casey (red) as a Tight End. It appears the Bengals do, because they counter with their Nickel (5 DBs) package.

With a safety deep between the hash marks and Leon Hall over top of Kevin Walter, I would have guessed this was a Cover-1, Man under coverage if I was the QB. If that's the case, Rey Maualuga would be covering the aforementioned Casey into the flats. That's an advantage for the Texans. 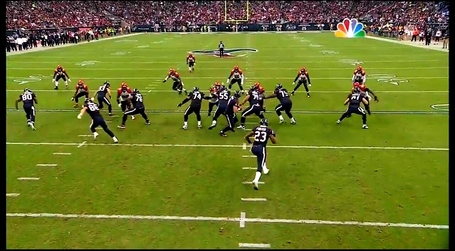 At the snap, you see Maualuga breaking to the outside. When you're a QB trying to decipher coverages in less than one second, this again gives the perception that Rey is covering Casey out of the backfield. 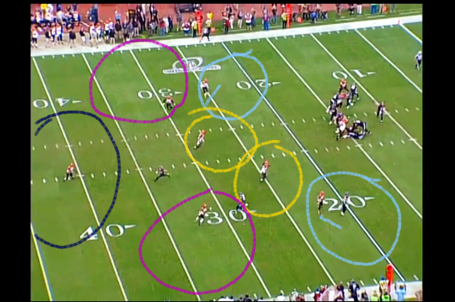 Instead, what we're getting is a Cover-3, Zone variation. For you Madden players, I highlighted each defender's Zones in the correct colors.

Schaub probably should be hitting Walter on the Corner (7) route behind Pacman and far enough to the sideline where the safety can't get to it. But, Schaub appears to read the defense wrong and really doesn't have the arm or confidence to make that throw consistently. 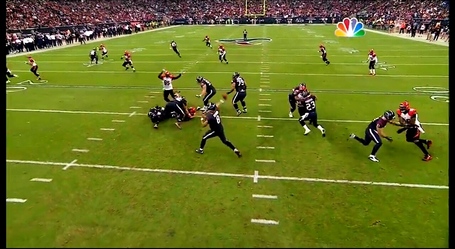 A common misconception is that quarterbacks go through progressions and look for an open receiver, but it's more likely that a QB is reading a defense before the snap and immediately after the snap by looking for certain keys. Then he throws to a target depending on what he reads.

Matt Schaub hits his back foot after staring down the middle of the Bengals defense, turns left and immediately throws to James Casey, who Schaub thinks should be open. 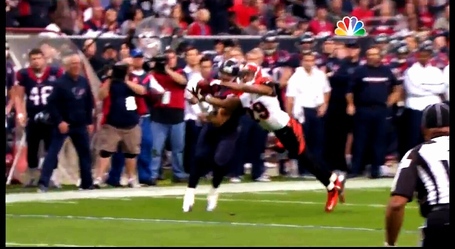 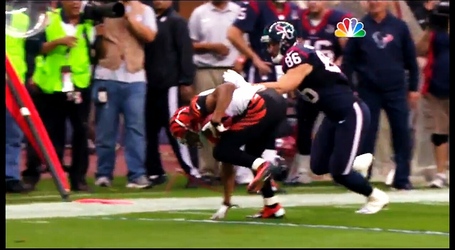 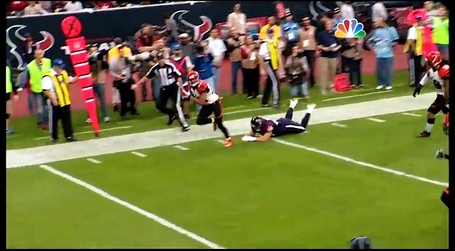 Instead, it's the Bengals best defensive back in Leon Hall covering Casey.

Hall undercuts the route and catches the ball away from his body. He reels it in, regains his balance with his other arm and returns the interception to give the Bengals a 7-6 lead.

This play silenced the crowd and gave the Bengals hope again.