Continuing our top plays of 2012, we look at Michael Johnson's performance against the Washington Redskins.

Share All sharing options for: Top Plays of 2012: Michael Johnson vs. RGIII

Robert Griffin's entrance into the NFL was noisy, blustery, and even celebratory. Rarely does an NFL draft promote two tremendously talented quarterbacks with the first two selections, naturally generating interest. To their credit, Andrew Luck, selected first overall, and Griffin were as advertised.

During his NFL debut against the New Orleans Saints, Griffin completed nearly 75 percent of his passes for 320 yards receiving and two touchdowns. Despite losing to the St. Louis Rams the following week, Griffin generated three touchdowns with two on the ground. Understandable, Griffin was perhaps the most intriguing story in the NFL

Then the Bengals came into town during week three.

Cincinnati had an agenda. Score quickly and beat Griffin up. Cincinnati's defense generated five quarterback sacks, 11 additional hits on Griffin and 12 hurries. Johnson officially recorded three sacks, but a fourth, called a "team sack" could have easily been his.

Three plays deep into Washington's opening possession, Griffin positioned himself for a bubble screen but held onto the football -- likely due to Carlos Dunlap blocking Griffin's line-of-sight to the receiver. Yet when Griffin brought the football down, he dropped it. After a mad race to recover the loose ball, Griffin dove on the football while Michael Johnson was the first to touch the downed quarterback. It was called a team-sack.

Regardless, Washington was forced to punt. During the final two possessions that Washington would string together in the first quarter, the Redskins posted only one first down.

With 2:52 remaining in the first quarter, the Redskins have first-and-ten from Washington's 31-yard line.

Trent Williams suffered an injury earlier in the quarter and was replaced by Jordan Black. Griffin took the snap and extended his arm to Alfred Morris. Johnson observed, applying patience like a starving tiger. 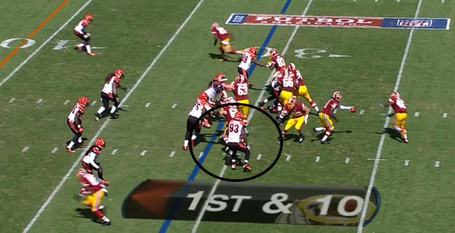 Johnson reengaged the the pass rush.

Driving the blocker back, Johnson eventually pivoted his foot to spin. With an unobstructed path to the quarterback, Johnson disengages.

On the very next play, Johnson applied a very complex move that's widely known as "running faster than you." It's second and 14 from the Redskins 27-yard line. 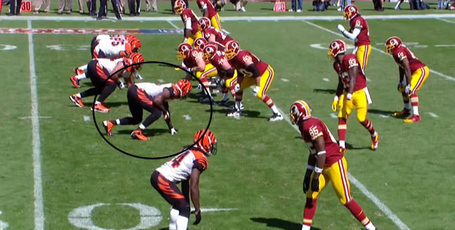 With Jordan Black in at left tackle, the inexperienced offensive lineman didn't fully comprehend Johnson's speed coming off the edge.

Johnson would generate another sack in the second quarter, giving him three for the game.